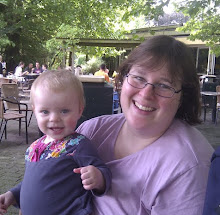 Mieneke is many things: a mother, bibliophile, career woman and friend. How she manages to balance all that is beyond me. Mieneke has two kids and still keeps her head on straight. I have one and I hardly feel like I’m treading water sometimes. She also, somehow, manages to run a truly wonderful review blog, A Fantastical Librarian, where she churns out amazing reviews at a surprising pace.

Mieneke is a lot of things I wish I was. She’s a librarian, which is a job I would truly love, but will never have. She’s married to a man who also reads as much as she does, which I’ve always thought was neat, and incredibly rare with the dying off of reading in favor of gaming/watching movies. What amazes me is, despite how incredibly busy her life must be, she’s always incredibly nice and personable and her reviews and insights into books never falls short of fantastic.

The truth of the matter is, Mieneke runs an incredible blog that deserves a ton of attention. She’s deep, honest and kind. Those are three qualities I rarely seem to find in the same person, but they are easily found with her. Mieneke’s blog is growing and expanding at a shocking rate. She has a steady flow of traffic, only helped by the frequency of her quality reviews. She’s a book blogger worth watching. I predict wonderful things in her future and I’m really excited to watch it all unfold.

Mieneke van der Salm works as an information specialist at a university library. In her free time she aims to create her own library at home and, together with her husband, raise two little geek girls. She blogs about her reading adventures at A Fantastical Librarian. (http://a-fantastical-librarian.blogspot.com/)

When Sarah approached me about being part of her Disabilities in SFF month, I was really flattered but also a bit worried. The only books I could come up with off the top of my head with disabled characters in a major role were Elspeth Cooper’s Songs of the Earth &#8211; and she’d just written the awesome post for Sarah that inspired this whole month, so that was out &#8211; and Blake Charlton’s Spellwright and Spellbound, but I’d already reviewed those on my blog and they’ve been discussed all over the place, so those were a no go as well. So I decided to ask my husband whether he could remember if we had any other books with disabled main characters and he came up with some titles and characters that confused me; he mentioned Pug from Raymond E. Feist’s Magician and the Fitz from Robin Hobb’s Farseer trilogy. His reasoning was that they were pitied because their magic was considered stunted, since it was either really weak, as in Pug’s case, or lost due to trauma, as in Fitz’s case. I didn’t agree with him, largely because I argued that, since magic wasn’t a universal skill in these worlds, it was a talent, not possessing it, or only possessing it weakly, couldn’t be considered a disability. Now, if magic was an innate ability, such as walking is for us ordinary humans, then not being able to do it, would be a disability.

However, this discussion did start me thinking about what constituted disability in fantasy. If not all disabilities in fantasy are realistic and some are only possible in fantasy, then not all realistic disabilities would have to be so in fantasy. Examples of fantastical disabilities are the only non-magical child in a magical society, such as the squibs in Harry Potter, or the child with a different magical ability than the norm, arguably Feist’s Pug. Or moving away from magic, what if you are part of a flying race, such as the Siyee in Trudi Canavan’s Age of the Five series and you have crippling vertigo? That would be a definite handicap, no? At the same time some realistic disabilities are not such a problem in fantasy, either because they can be magicked/healed away or because the people suffering from them are just bad-asses. An example of the latter is Dujek Onearm from the Malazan universe, a one-armed general, but we never realise he’s one-armed other than because of his moniker; it’s never really mentioned and doesn’t seem to limit him. The same goes for Tyrion Lannister, from Martin’s A Song of Ice and Fire. Being a dwarf is a definite disability, by Tyrion makes it work and doesn’t seem to experience a lot of problems because of it; he’s just another bad-ass, albeit more by way of his tongue and brain than his sword.

So what is disability in fantasy? I’d posit that it’s an impairment that can’t be taken away by magic or healing (if such exists in the universe the character is part of) or any other miraculous means and which does truly affect the character in a meaningful way. So Dujek Onearm or Tal Hawkins, from Feist’s Conclave of Shadows series, wouldn’t be counted disabled, because while Tal does need to relearn sword fighting with his other hand, they both don’t seem to be hampered in any way in their actions. However, Joe Abercrombie’s Glokta and Charlton’s Nicodemus would be considered disabled because their impairments certainly affect their lives in meaningful, and more importantly, detrimental ways.

One character I’d put forward as disabled, but one who is highly debatable, is Cassel from Holly Black’s The Curse Workers. In a family of gifted Workers, Cassel is the only one who is ungifted and can’t do any magic. As such he is looked down upon by his siblings and he feels very much inferior and useless as a result. So he is considered disabled by his society and comes across as feeling it too. But is he? Apart from the fact that his society is only a subset of the larger world, he can live his life perfectly fine as a normal person; thus, he isn’t physically impaired. But he is mentally impaired because of how he and his family perceive him due to his lack of magic, so in my opinion that does make him disabled, if only in his own eyes.

So, dear reader, what do you think? Does my definition of disability in fantasy make sense or do you think I’m just talking nonsense? And is Cassel is disabled or not?

You can find Mieneke on Twitter and also on her blog, A Fantastical Librarian. The truth of the matter is, if you haven’t checked out her blog yet you really need to. Mieneke is a voracious reader with an unparalleled insight into the books she reads. It’s probably obvious, but I’m a little jealous of her! Go check out her blog.