The Darkness That Comes Before – R. Scott Bakker 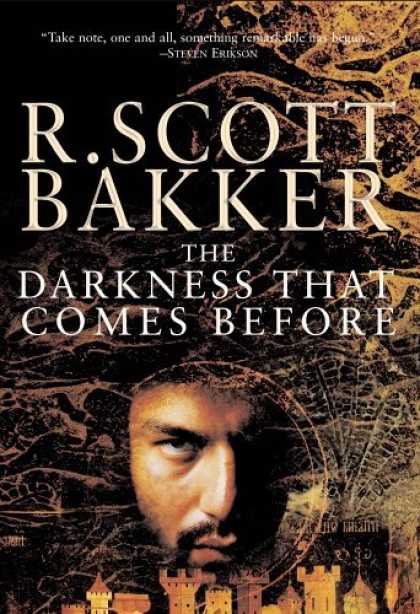 
Canadian author Bakker’s impressive, challenging debut, the first of a trilogy, should please those weary of formulaic epic fantasy. Bakker’s utterly foreign world, Eärwa, is as complex as that of Tolkien, to whom he is, arguably, a worthier successor than such established names as David Eddings and Stephen Donaldson. Bakker creates an extraordinary cast of nationalities and races involved in an enormous holy war set off by an unseen prophet, Maithanet. (Appendices help keep the history and personalities straight.) He casually drops for half the story an increasingly important character, Anasûrimbor Kellhus (aka “the Prince of Nothing”), who finally returns without a breath of exposition. The amiable and wise sorcerer spy Drusas Achamian binds the myriad narrative threads together. Drusas’s love for Esmenet, a too-experienced prostitute, provides some tenderness amid the abundant slaughter. In the book’s most harrowing scene, which fans of gentler fantasy will find too graphic, Esmenet is raped by a creature who, despite its human appearance, is likely demonic. If this ambitious novel lacks the beauty of Tolkien as well as the sense of pure evil that suffused Middle-earth with genuine terror, its willingness to take chances and avoid the usual genre clichés should win many discriminating readers.

There are some books which seem to defy my ability to properly review and rate them. The Darkness That Comes Before seems is one of those.
Bakker has started an epic trilogy with this book that spans the scope of an amazingly foreign, yet realistic world. While Bakker’s world is well developed and his writing proves him to be an amazingly talented author, there were times that this book seemed to venture over some invisible line and turn rather self-indulgent with long philosophical ramblings. Regardless of that, this is a book fantasy readers should take note of.
The Darkness That Comes Before is a prelude to the rest of the series, more than anything else, and readers should be aware of this when they start this book. Bakker spends much of his time lining up the characters, their stories and personalities as well as defining the world he has created. Bakker peppers his work with lots of inner dialogue, philosophical ramblings and detail, detail, detail. Readers who are willing to navigate through treacherous, and at times lengthy inner discussions and detail-laden observations will be rewarded. The sheer magnitude of the story he is weaving is incredible.
In some ways this book reminds me a lot of Gardens of the Moon by Steven Erikson. Many readers that were willing to immerse themselves in a book where they had no idea what was going on or who was who,  found that Gardens of the Moon was the start to an incredible epic series. In that vein, The Darkness That Comes Before may turn out to be the same idea. If a reader is willing to navigate through situations that they won’t understand for most of the book, and follow characters that may be hard to relate to, and weave through an abundance of thickly laid details, they will find themselves rewarded with a compelling story and powerful characters.
Bakker’s world building is amazing. I always find myself gaping at epic fantasy authors who manage to not only build an incredibly detailed, complex plot but also a world to match it. His abundance of detail pays off, making the world he has created vibrant with realistic hues, viable histories and covered with interesting peoples. Many readers will find that many parts of Bakker’s world (I’m thinking of some of his religions here) may seem reminiscent to our own, which helps ease the reader into the epic and foreign vision Bakker has.
Bakker’s characterization is rich but herein lies where I am conflicted about rating this book. Some of Bakker’s characters are waterlogged with far too much detail and back story while others that he has obviously set up  (example: Serwe) to be incredibly important to the novel are amazingly boring in this book and so two-dimensional they are, very nearly, the most unrealistic part of the entire book. Bakker spent so much time developing his world, its rich history and vibrant, diverse peoples, it almost seems as though he had left some of his overabundant narrative, observations and philosophies off of several of his characters making them pale in color when compared to the rest of his world. And thus, they stick out like a sore thumb.
Don’t get me wrong; Bakker has an impressive talent for drawing characters. Most of his characters (except a few) have impressive back-stories, are so ridden with conflicting thoughts, beliefs emotions and flaws as to seem impossibly real to the reader. Each character is drawn with the vivid precision of a master artist which made the few that fell short of that mark seem to stick out all the more in my perspective.
The Darkness That Comes Before is an impressive debut book and Bakker should be intensely proud that he has created it. There weren’t just a few times I found myself wondering what kind of mind it would take to build something so richly and realistically detailed with such an intricate plot that spans so many different nations, cultures, beliefs and traditions. For readers who are willing to navigate through the treacherous waters of far-too-much-detail and intense inner dialogues while trying to puzzle out new characters, names, faces, beliefs and situations, they will find themselves rewarded with a compelling story and a world built so well it rivals the best artwork. However, for readers who find an overabundance of details and foreign situations tedious (or may be squeamish with richly detailed violence) I’d suggest avoiding this book.
4/5 stars