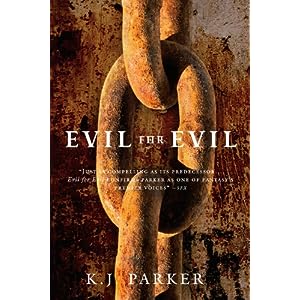 
Civitas Vadanis is in trouble. The Mezentines have declared war; and the Mezentines are very focused on their goals when it comes to killing.

Duke Valens, of Civitas Vadanis, has a dilemma. He knows that his city cannot withstand the invading army; yet its walls are his only defence against the Mezentines. Perhaps the only way to save his people is to flee, but that will not be easy either.

Ziani Vaatzes, an engineer exiled by the Mezentines for his abominable creations, has already proven that he can defend a city. But Ziani Vaatzes has his own concerns, and the fate of Civitas Vadanis may not be one of them.


My review for Devices and Desires is here.


Evil for Evil is the second book in K.J. Parker’s Engineer trilogy and probably one of the strongest “middle books” I’ve read. Evil for Evil takes off where Devices and Desires left off.


This book hit the road running and not once did the plot slow down or ease up. Parker’s writing was, as always, rich, detailed, evocative and dry. The theme is the same, the importance and ultimately destructive force of love as well as the importance of creation and desire. While these themes may seem rather mundane and arbitrary,  Parker weaves them into a complex, multi-faceted plot that can’t help but suck the reader in.
The second novel in series is usually the weakest. The characterization usually lacks; the plot tends to drag. Generally the second book is the book that bridges the gap between the start and the ending and usually that’s exactly what a second book feels like: plodding across a gigantic bridge to some unknown end. Not this book. Parker never lets her characterization fall. By and large, there aren’t any new major characters introduced into this work. If you had a grip on what was going on in the first book, you won’t have a problem following this one. Instead of focusing on introducing new characters, Parker seems to spend most of her time honing and fine-tuning the characters she introduced in Devices and Desires.
None of the characters in Devices and Desires were particularly loveable. They were all amazingly flawed and almost completely morally neutral and that doesn’t change in Evil for Evil. Instead, with Parker’s deft weaving, the reader is introduced to more depth in all of these existing characters. Instead of rehashing personality traits we’ve already been exposed to, we are introduced to new facets of these characters. In doing this, Parker made the characters pop to such brilliant life I almost felt like they weren’t just written in a book, but actually existed in the real world around me.
Parker’s plot never falters. As I said before, this book hits the road running and doesn’t stop. The plot is every bit as complex and profound as Devices and Desires. However, since reading Devices and Desires and getting a feel for the overall writing and theme of the book made it easier for me to wade through the complex themes, dialogue and plot twists. While I didn’t find myself as surprised with this book as I was with Devices and Desires, there were quite a few wham-bam plot punches toward the end that left me reeling and nearly suffering heart palpations.
If you made it through Devices and Desires, I think this book would be easier to grasp and follow. My only true complaint is, by the end of the book, there was a fair amount of whining going on by almost everyone. While I can sympathize with their plights, I did get rather sick of hearing the same basic gripe from all points. However, that being said, Parker’s writing never lags, the plot remains tightly woven and satisfyingly complex and her characterization is, if anything, even more colorful and interesting than it was in the first book.
All in all, that’s a pretty lame gripe for such an incredible book and very quick to overlook.
This book was, to put it in a word, incredible. It’s a roller coaster ride through the imagination of someone a hell of a lot smarter than I am. By the end of the book all of the side plots (which, I admit, I wondered how they were important when they were introduced) come together very nicely. There were quite a few “ah ha” moments in this book where the proverbial light bulb clicked on and everything from Devices and Desires and Evil for Evil synced and made complete, ingenious sense.
While I feel as though now I understand what all the hubbub Ziani dreamed up was about, I am still eager to see how Parker makes it all pan out in The Escapement, which is the last installation of this trilogy. There are enough open ended questions and newly introduced plot twists to make The Escapement one hell of an exciting ride.
All in all, I can’t believe how amazing I am finding this series thus far and I cannot, honestly, recommend it high enough. I don’t know who Parker is, but I think I might be envious of his/her intellect. Anyone who can dream up a plot this complex, this tightly woven and realistic deserves to be noticed.
5/5 stars