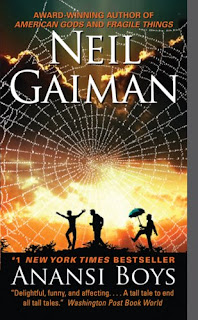 
If readers found the Sandman series creator’s last novel, American Gods, hard to classify, they will be equally nonplussed—and equally entertained—by this brilliant mingling of the mundane and the fantastic. “Fat Charlie” Nancy leads a life of comfortable workaholism in London, with a stressful agenting job he doesn’t much like, and a pleasant fiancée, Rosie. When Charlie learns of the death of his estranged father in Florida, he attends the funeral and learns two facts that turn his well-ordered existence upside-down: that his father was a human form of Anansi, the African trickster god, and that he has a brother, Spider, who has inherited some of their father’s godlike abilities. Spider comes to visit Charlie and gets him fired from his job, steals his fiancée, and is instrumental in having him arrested for embezzlement and suspected of murder. When Charlie resorts to magic to get rid of Spider, who’s selfish and unthinking rather than evil, things begin to go very badly for just about everyone. Other characters—including Charlie’s malevolent boss, Grahame Coats (“an albino ferret in an expensive suit”), witches, police and some of the folk from American Gods—are expertly woven into Gaiman’s rich myth, which plays off the African folk tales in which Anansi stars. But it’s Gaiman’s focus on Charlie and Charlie’s attempts to return to normalcy that make the story so winning—along with gleeful, hurtling prose.

“His name is Marcus: he is four and a half and possesses that deep gravity and seriousness that only small children and mountain gorillas have ever been able to master.”
That, my friends, is probably why I always get a kick out of reading Gaiman’s books. Gaiman seems to excel at drawing parallels between objects, people, places and feelings that most people would never even think to compare. Somehow each of these comparisons ring true in my mind. It sets his writing apart, makes his works, even if they are somewhat unoriginal at time, easy to devour just to see how he describes the world he is writing about.
Anansi Boys is set in the same world as American Gods, and while I don’t think it is as good as American Gods, it’s still worth reading for anyone who was an American Gods fan. This book is more about relationships than anything else and as usual Gaiman has infused his book with odd situations and enough dry humor to keep readers laughing their way through it.
American Gods was epic in its scope whereas Anansi Boys is more self-contained and thus, allows a tighter weaving of plot and detail than its predecessor. Readers may find that they feel more attached to the characters in Anansi Boys and the world they live in than they did with American Gods. Gaiman’s characters never stop wrangling with real world problems from crappy jobs to horrible in-laws and the such. The striking contrast shown in Anansi Boys as the character wrangle with the mundane and supernatural is incredibly humanizing. This will most likely serve to help the reader feel attached and relate to the book more than they would have in American Gods.
While I did highly enjoy this book, I enjoyed American Gods more. American Gods seemed to be darker, grittier, more thought provoking than Anansi Boys. While Gaiman’s writing is flawless, his plot was quickly moving and easy to get lost in, and his world was perhaps a bit more relatable in Anansi Boys, there were some issues that, as a reader, bothered me.
The ending of the book was sadly predictable for me (I will freely admit that I may be unique in this as most reviews I’ve read don’t see predictability as a problem). Gaiman’s writing is easy to get lost in but I missed the subtle depths of American Gods that were sadly lacking in Anansi Boys. American Gods stuck with me for days after, and I doubt that Anansi Boys will have that same affect on my psyche.
Gaiman’s ability to weave myth into his plot effortlessly spanning global cultures is nothing short of genius and while this book is more about relationships than anything else, it’s interesting to see how gods and myths can and have shaped the world. While most of the characters are new in Anansi Boys, there are a few showings from characters in American Gods, as well.
This book is worth reading and I can personally see how certain readers may likely enjoy Anansi Boys far more than American Gods. When comparing and contrasting the two books, it’s important for readers to understand that, while they take part in the same world, they are two very different animals and preference will be largely based off of individual likes and dislikes rather than any major striking flaw in either novel.
Regardless, Gaiman is always worth reading if you are in the mood to take a fast moving journey through previously unexplored oddities along with strikingly sarcastic and beautifully wrought prose.
4/5 stars