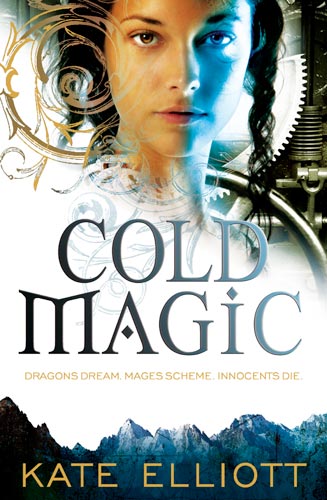 I have a love-hate relationship with Kate Elliott’s work. I have never thought Elliott was a bad author; I usually have problems with the overall story being told. That being said, I was incredibly skeptical when I picked up Cold Magic. It took me about five or six chapters to get into the book, as the first few chapters are set up to agonizingly prove to the reader that the protagonist is a painfully normal girl in a changing world who has some ultra mysterious family history. After a plot twist around page 80, I felt sucked in and really started enjoying what I was reading.
Cold Magic is set in an alternative earth in the nineteenth century. Elliott’s setting is incredibly captivating with just enough real history to make the world pop and enough fantastic elements (like some steampunk and magic) to keep the fantasy reader interested.
The overall writing style made me think that Elliott was reminiscent of Jacqueline Carey, who is pretty well known for her flowery descriptions in her various Kushiel and Naamah books. Elliott purposefully made the dialogue sort of Victorian-esque. However, at times her overall dialogue and description would seem to switch to a more traditional track. While this does add to the overall time period she is writing about, it can get rather tiresome when (for example) an insult takes about a paragraph to properly say.
While some readers may find fault with Elliott’s style with this book, my humble opinion is that it helped add a layer of reality to the world she created. If it did get tiring at times, it was overall an essential piece of the book to layer it with some of the period. Some would say it’s the small details that can make world-building sink or swim, perhaps this is one of those small details.
The book follows Cat, the protagonist through her adventures and while I won’t give much away here, I will say that there is a lot of traveling, running and discovering involved in this book. Normally that kind of thing bothers me, but this book would have ultimately failed if the whole story had been told in one city. In this case, the nearly constant traveling keeps the plot moving at a fast clip, and will keep readers interested in the world at large and the discoveries made during Cat’s journey.
This book is told in the first person and Cat is traveling a lot of the time so there is a lot of internal dialogue peppered throughout the pages. Sometimes it can get bogged down by obscene amounts of history, but that is easy to overlook as Elliott tends to create the history of this alternative earth by drawing on our own past and infusing it with interesting creatures like trolls and aspects of fey.
There were elements of the plot I thought were amazingly cliché. An example of this would be the romantic interest which follows almost verbatim the stereotypical romantic interest plotline that so many other books follow, though not to an overbearing extent. While many may find it heartwarming, to me it lacked creativity and its predictability was a disappointment. Another predictable aspect of the plot was one of the major personal discoveries Cat makes about herself and her own familial history, and I’m sure other readers will find other aspects like this as well.
I will freely admit it was the world I found to be the most interesting part of this book. Elliott’s choice of using the Industrial Revolution as a counterpoint to the somewhat subtle magic system was very wise. She didn’t shy away from touching on the political or ideological ramifications these changes brought to her world, which added to the interest and believability. While I felt the steampunk elements were not incredibly necessary to the plot, it added a nice flourish to the world.
This isn’t a book you read to be wowed by its epic or dark qualities. Cold Magic is a book about personal struggle, growth and identity. The writing can be needlessly heavy at times, but the world is very interesting, kind of an ice-age steampunk with some relatable history thrown in. If points of the plot were predictable, the overall story is somewhat heart warming and potentially thought provoking. Cold Magic is a somewhat light, entertaining read which will suit both young adults and adults alike. It’s a strong first entry to a new trilogy. I look forward to seeing what else Elliott can dredge up to add to this solid start.
4/5 stars