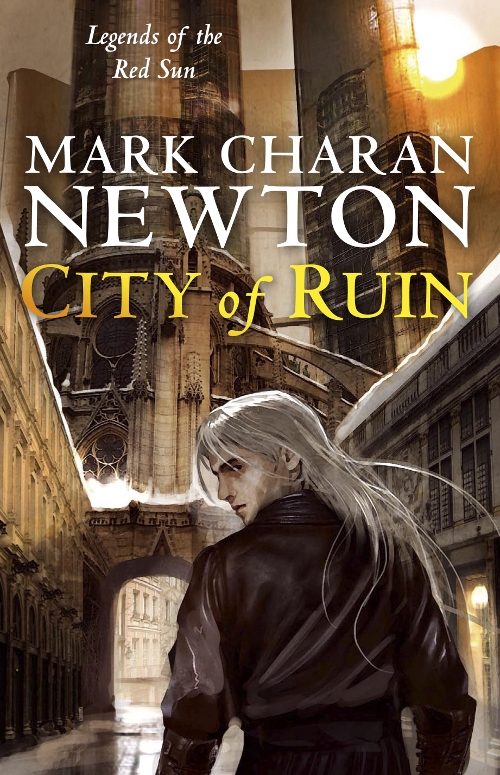 Read my review of Nights of Villjamur
Authors official website

(Warning: this is a little longer than my typical review length because I can’t seem to get myself to stop talking about this book. It’s the authors fault for writing something I enjoy so much.)

Not too long ago I finished Nights of Villjamur, went to the library (where they are already organizing a hold list for the not-yet-published City of Ruin) and to several bookstores to find the follow up book to Nights of Villjamur only to learn that it’s not being published in the US until the summer of 2011. Yes, I realize that if I actually paid attention to things I would have known this before I set out to find the book. Anyway, I did what I always do in situations like this. I pissed and moaned about how the UK always gets the best books first (grumble, grumble). I was going to buy the UK version of City of Ruin until a book review blogger took pity on my griping soul and sent me an .epub version of this book. Thanks to him, I suffered no heart palpitations or strokes while waiting for the next installment of this series.
I loved Nights of Villjamur. It’s one of the rare books I actually allotted five out of five stars, so City of Ruin was both highly anticipated and had quite a few expectations to live up to. It’s always hard for me to read a book I anticipate as much as I anticipated this one because the fear that it will fail miserably to live up to the hype seems to be doubled. My experience with The Desert Spear just highlights the fact that yes, this does happen on occasion with highly anticipated books.
Most reviews I have read loved Nights of Villjamur. It was dark, sprawling, intense and ambiguous all wrapped in well measured, deftly written prose. It was an ambitious first novel. The real question(s) in my mind was: could Newton do it again? Could he manage another book without making everything I loved from Nights of Villjamur suffer in an effort to prove himself against heightened expectations?
City of Ruin is, if possible, even better than its predecessor. Newton hit his literary stride. One of my complaints regarding Nights of Villjamur (which I still can’t quite figure out how to properly say) is that I felt that Newton was purposefully withholding information from the reader. Much of the book was so measured I felt like he was dropping me nothing but crumbs to survive off of. City of Ruin doesn’t have that problem. The world is vast; the city of Viliren is sprawling, dingy and incredibly well built. Viliren itself surprised me with how well Newton balanced similarities with Villjamur to keep the reader well associated with his world, and enough contrasts to make Viliren unique, different and fun to read and learn about.

However, where Newton really exceeds in this book is the small flourishes he adds to everything, from the plot, to the world building to whatever. Someone obviously cut Newton’s leash in this book and

City of Ruin shines for it. Nothing in City of Ruin is typical for fantasy. I believe the creatures he created and injected into his plot and the reasons for (some) of their creations should be noted. It’s impressive and refreshing to see an author take such a dramatic left turn when so many fantasy books make a right turn and write about pointy eared whatevers and gigantic flying scaled creatures. He did none of this. His creatures are grotesque in some cases, and incredible in others, but never once have I read anything like them anywhere but here.
Not only should his ability to make what can seem to be a tired genre refreshed and unique be noted, but also I would feel remiss if I didn’t mention the new characters in this installment of the series. While it’s not uncommon for new characters to be introduced in subsequent books of a series, I usually accept them with a take-it-or-leave-it air. Occasionally, it’s so obvious with new characters that the author is trying to fluff his series up, it becomes tiring to read about them. Not here. I immediately embraced the new characters in City of Ruin.
The world he started building with Nights of Villjamur fills out in City of Ruin with even more color and many more layers. He is good at keeping a more or less morally neutral middle ground as he dedicates as much time to explaining the motives of the people who make my skin crawl as he does with the characters you may or may not sympathize with from the previous book. It was quite incredible for me to see how well he made the new characters, and their seemingly odd habits and perspectives regarding certain things fit together in surprising ways toward the end of the book. Even the characters that do carry over from Nights of Villjamur seem to become even more interesting and complex with their actions and morality in this installment of the series.
I made a point in my review of Nights of Villjamur to note how I respected Newton for infusing his book with themes of social justice and sexuality and other aspects of that nature because they are close to my heart. Part of me was worried that he would relieve City of Ruin of those matters entirely, but he didn’t. Where I thought Newton was brave for inserting them into Nights of Villjamur, he should be given a metal of honor for his work in City of Ruin. Newton seems to make a point of making sexual politics, masculinity, ideas regarding violence, and even racism almost pivotal plot points where so much hinges on the perspectives of so many people regarding these issues. What is more impressive is that he doesn’t just insert this into his story, he discusses these ideas from the widely varying perspectives of main characters and even adds a religious viewpoint to the stew of ideas. This is amazingly brave (in my opinion), and even more compelling because many of these issues run parallel to issues in our own world.
There are flaws in this book, but by and large City of Ruin is so well written, so put together and thought out that they are easy to overlook. The main overarching problems I noticed in Nights of Villjamur have been fixed in City of Ruin (because I strive not to give away plot points in my reviews, I won’t expound on them). However, some of the events in this book seemed a little too convenient, but it’s easy to forgive and forget.
City of Ruin is the type of book I’d expect from a well-practiced author. Newton fully flexes his creative muscle, adding to his well-built world with unique flourishes that are at once understated and impossible to miss. His plot is quick moving, but well paced. His writing is perfectly measured and incredibly descriptive without going over the top. His characters still inhabit that gray moral zone I so love. However, Newton seems to spend more time in this book exploring alternative motives, viewpoints and beliefs with his new characters which seems to make his world, as a whole, more well rounded and firmly built than it appeared in its predecessor.
Newton is a brave, daring and incredibly talented author who is well worth paying attention to. I have said it once and I will say it again, Mark Charan Newton has potential to rock the foundations speculative fiction genre, and I, for one, am anxiously waiting to see just what becomes of his shocking entrance into the field.
5/5 stars