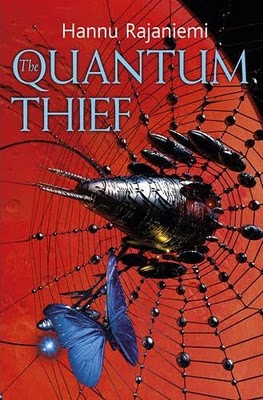 About the Book
Jean le Flambeur is a post-human criminal, mind burglar, confidence artist and trickster. His origins are shrouded in mystery, but his exploits are known throughout the Heterarchy – from breaking into the vast Zeusbrains of the Inner System to steal their thoughts, to stealing rare Earth antiques from the aristocrats of the Moving Cities of Mars. Except that Jean made one mistake. Now he is condemned to play endless variations of a game-theoretic riddle in the vast virtual jail of the Axelrod Archons – the Dilemma Prison – against countless copies of himself. Jean’s routine of death, defection and cooperation is upset by the arrival of Mieli and her spidership, Perhonen. She offers him a chance to win back his freedom and the powers of his old self – in exchange for finishing the one heist he never quite managed .
The Quantum Thief is a debut work by Rajaniemi. When you realize that this is a debut work, you may be surprised. It doesn’t read like a debut work. The author opens the book completely comfortable in the story being told. Many other reviewers have called this as the debut science fiction book of the year. All it takes is takes is a once-over to understand why.
The Quantum Thief hits the ground running and never once gives up its relentless, headlong dash through events transpiring on Mars a few centuries in the future. Mars itself is an amazing world filled with a moving city, incredible technology and the social problems that these technological advances raise. However, it’s the three main protagonists that really make the book pop. Each of them is uniquely individual and different with their own motivations and desires. When this is added to the devastatingly detailed world the reader can’t help but be in thrall.
The book itself is written with plenty of dark humor and incredible situations which helps to balance out the seemingly heavy handed scientific concepts. While, at the beginning of this book the reader may feel lost with these scientific terms and ideas, Rajaniemi does a good job at explaining them, or portraying them in a way that make them understandable later on. For readers willing to read a book where they feel confused for the first fourth, there is a rich reward. The story is rich and deftly plotted and the incredible characters can’t help but draw you in. The ending is satisfying.
Rajaniemi does a great job at making things out to not be what they always seem. While many authors writing those kinds of books fill them with campy foreshadowing, Rajaniemi does none of this. He lets the reader figure everything out in his or her own time. Rajaniemi helps you along by dropping clues into the tale to help those out detailed enough to notice them. This seems to liberate the story from proverbial “hand holding” many books can suffer from, which in turn allows the plot to run forward at it’s incredible breakneck pace.
While I did enjoy this book immensely, it was difficult for me to fully understand at times. Rajaniemi is obviously familiar with his scientific concepts and he does, at times, lay them on thick. This could make many readers feel slightly estranged from the plot and overall story being told. However, if you plow through these concepts they usually become explained or can be understood in pages (or sometimes chapters) later. This can cause an emotional remoteness from the overall characters and tale being told. While the concepts were interesting, I felt that if this book was more approachable it would have been easier for me to care a bit more about the obvious depth the author was trying to attain.
This is a promising work that many have, and will, enjoy. Rajaniemi is a good author. Despite the fact that I did feel some overall remoteness from the general tale being told, it’s a fun romp through science fiction which allows the reader to play detective along with the characters. The “not everything is what it seems to be” quality of this book is nicely done. A colorful world and interesting characters coupled with thought provoking concepts will serve to interest many readers in The Quantum Thief. This is a promising work. I am excited to see what Rajaniemi cranks out in the future.
This book has been published in the UK and will be published in the US in spring of 2011 (I think).
4/5 stars