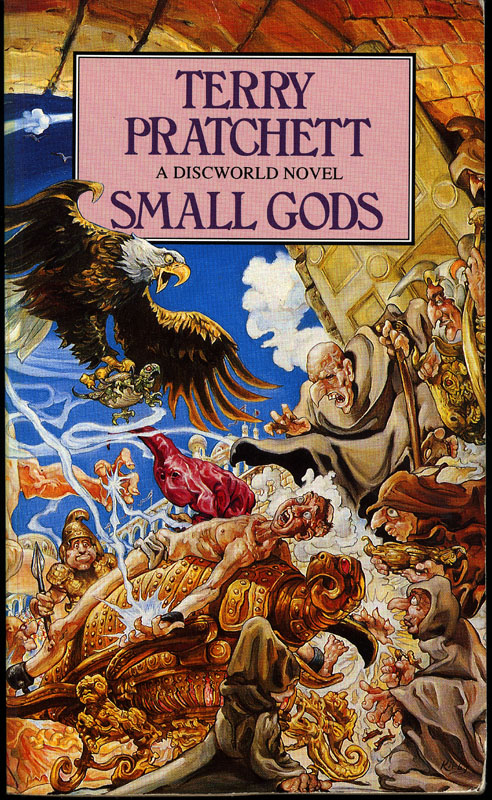 About the Book
A simple lad who can neither read nor write, Brutha is content growing melons for the Temple monks. But his lot changes when a tortoise appears in his garden. To Brutha’s dismay, he discovers that he’s become his god’s Chosen One – a difficult position that requires spreading goodness and stopping holy wars.
Of course no good deed goes unpunished, and soon some rather inquisitive folk are taking an unhealthy interest in Brutha. They don’t see a need for peace, love, and tolerance. They liked the old days just fine. And Brutha, too, yearns for the simple life he once led—a desire that leads him to wonder just why his god didn’t choose someone else.
I have tried to write this review at least three times. I have no idea where to start with it. At first Small Gods seems to be nothing more than a hilarious satire on religion but this book is deep. Pratchett has mastered the art of blending the profound and thought provoking with hilarity which made a heavy, sensitive topic an easy one to read, enjoy and internalize.
At the root of this novel is the message that gods need belief to survive and humans, in turn, make gods what we want them to be. This message is portrayed through layers of story and enough humor to make reading this book in public immensely difficult (if you want to look sane). Pratchett weaves his message through a tale of adventure with Brutha, an easy-to-overlook melon grower for the church, the Great God Om who has somehow managed to turn himself into a tortoise instead of a white bull and Vorbis, a mastermind and manipulator.
Pratchett is a master of dynamic in Small Gods. The book starts out with scenes of extended hilarity as he introduces the reader to the world, characters and traditions he’ll be working with. Slowly, as the book progresses it becomes obvious that there is more to this story than odd situations and extended periods of humor. Many of the religious traditions and stories being told are reminiscent of our own world religions.
The book really starts rolling when Om realizes that Brutha is his only true believer and thus, must stay near the boy if he wishes to retain any of his god-mind. A journey ensues to a strange land and many revelations (and hilarious moments, like a bar room brawl where the goddess of wisdom is revealed to be a gigantic penguin). This realization by Om that Brutha is his only true believer is where the real shift in relationships and dynamics happen. The great god is completely reliant upon a human to exist.
The second half of Small Gods, while still hilarious and light hearted at moments, is much more serious. Pratchett shines in this book, whether it’s by humor or by his second, more serious half where the protagonist(s) take an almost hypnotic journey through a desert, which many religious readers will find parallel to some of their own stories.
That’s where the truly amazing quality of this book really lies. Pratchett’s humor is wonderful and his ability to swing between being hilarious and absolutely serious without ever loosing track of his plot is incredible. However, what really strikes me about Small Gods is how wonderfully and, at times, subtly he uses his book to parallel stories, events and motivations behind events in our own world.
Small Gods is a journey through a strange, foreign world on the surface, but if you look deeper it’s a journey through our own world and our own history more than anything else. Pratchett’s amazing humor and fantastic characterization will satisfy many readers, but it’s not hard to look past them and see that he’s really making a 357 page philosophical statement on the nature of belief, religion, justice and humanity. It’s when Brutha teaches the great god Om about humanity, justice and the nature of belief that things really become interesting. Though Om is a god, Brutha quickly becomes the more holy of the two.
The book ends poetically. Where it would be easy to demonize Vorbis and write him off, Pratchett chooses the higher rode and ends the book in a perfectly poetic way for the overall tale being told and the messages couched in his words. Vorbis is a character I’d usually complain about as being a little too predictable and one-sided. However, in truth he seemed to fit the role Pratchett needed him for perfectly. There isn’t much more Pratchett could have done with Vorbis in this short book. While he is my least favorite character in the book, he perfectly fills the niche he needs to fill.
Occasionally I’ll read a book, put it down, let out a long sigh and think how the hell did this author manage to get a brain complex enough to write out something this genius? It doesn’t happen often, but when it does, it leaves behind a feeling I savor.  Small Gods managed to put Pratchett on my list of the few. This book will stick with me, not only because it’s a hilarious, entertaining and enjoyable story but because the deep messages Pratchett is using this book to plant in readers minds are valid and absolutely timeless. This book left an unexpectedly deep impression on me. That’s part of the genius of Terry Pratchett. His humor and fantastic writing often overshadow a much deeper message or moral.
This book has to be one of my most unexpectedly impressive recent reads, seconded only by K.J. Parker’s Engineer Trilogy. No matter why you read this book, you are guaranteed to enjoy it on some level. It’s impossible not to.
Let there be lettuce. Low hanging, green lettuce.
5/5 stars