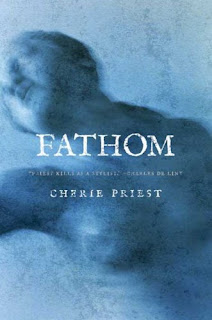 About the Book
The ageless water witch Arahab has been scheming for aeons, gathering the means to awaken the great Leviathan. She aims to bring him and the old gods back to their former glory, caring little that their ascendance would also mean an end to the human race. However, awakening the Leviathan is no small feat. In fact, Arahab can’t complete the ritual without humain aid.

Arahab’s first choice is José Gaspar, a notorious sea pirate from eighteenth-century Spain. But when the task proves too difficult for Gaspar, she must look elsewhere, biding her time until the 1930s, when the ideal candidate shows up: a deranged teenager named Bernice.

sophisticated, torn from New York and forced to spend a miserable summer on Anna Maria Island, a tiny rock off the coast of Florida. She’s also been saddled with the companionship of her farm-raised cousin Nia. Eventually, Bernice’s disenchantment gives way to rage, which in turn leads her to commit a deadly crime. When Nia won’t cover for Bernice’s actions, she turns on Nia, chasing her into the deadly coastal waves.

The timing is right and the elementals have better ideas: The moment the girls go under, Bernice is commandeered for Arahab’s task force and Nia is turned into a strange and powerful new creature by a servant of the earth who doesn’t want to surrender his green fields and muddy plains—not

yet, at least. Add in a hapless fire inspector who’s just trying to get his paperwork in order, a fire god whose neutrality has been called into question, and a bizarre religious cult, and rural Florida doesn’t seem quite so sleepy anymore.
I’ve never read Cherie Priest before, but I’ve had my eye on her for a while due to her Clockwork Century series, and how much attention it’s attracted. I’m not sure why I chose to start my Cherie Priest exploration with Fathom other than the fact that I like water, and Fathom has a lot of water in it.
The story is strange enough to make it difficult for me to pin down for a review, but I’ll give it my best shot.
Fathom is a book that can be appreciated by fans of fantasy or horror – or even the brave fiction fan. Priest’s prose is gothic, descriptive and lyrical. It’s easy to start the book and lose complete track of time reading it. The writing sucks you in. The world is vibrant, dark and well realized. This combined with the fantastic writing causes the characters and events to really fly off the pages.
Priest has the events happening somewhere around the 1930’s in Florida, but there is so little actual reference to the time (besides an actual statement, and a comment about the stock market crash which lead to the Depression), that it really could take place anytime. While some readers might find that annoying, I actually enjoyed it because it allowed me to open my imagination up to the world a bit more than I otherwise would have.
Priest calls upon mythology, both real and imagined to weave together the fantastic aspects of Fathom. Even though some of the mythology is borrowed from the real world, her imagination is so vibrant that it doesn’t seem borrowed at all. Everything is fresh and so incredibly strange that it’s easy to forget that this book takes place in an alternate to our world.
One of the, perhaps, most interesting aspects of this book was how little normal humans were in the plot. Yes, there were a few scattered here and there (as well as the two main characters until they transformed into their own unique beasts), but by and large the world was a world of forgotten gods, odd transformations, and unique happenings. This really makes the textual landscape seem so completely different from the Florida we all know of that Fathom might as well take place on a planet that doesn’t exist. This, in my mind, was a real point in Priest’s favor, but I could see how it could keep people from completely relating to the book as a whole.
Fathom is more than great characters, mythology and an interesting world. The book is, largely, a book of extremes where relationships are strained and tested and identity is explored. While the two main characters take on opposite elements, Priest weaves both of their experiences equally as deftly. Bernice seems as real in the water as Nia did on land and while both characters personalities were as opposite as their elements, Priest proved her versatility with her characters. They were both as real as each other, their development paralleled each other nicely to the point where they are both opposite sides of the same coin. However, they each retained their own unique voices throughout.
This isn’t a book you want to read if you want really happy endings. This is a gothic tale; strange and fantastic and the ending reflects that. While the strands tie up nicely, there are some bitter moments, and the ending leaves the reader with a sort of satisfyingly dark air. You don’t read this book expecting a surprise ending. I had the ending figured out from the point the plot was laid out clearly. I read it for the journey. It’s the small details that happen between the first and last page that really attracted me, the odd twists, turns and developments (some of which are very surprising) that take place that make this worth reading.
All in all, I really enjoyed this book. The writing is tight, the characters are unique, the world is incredible and Fathom is…strange. A tight narrative combined with real and made up mythology, a steady moving plot and underlying themes of relationships, love, loss, transformation and identity make this book highly readable. If some plot points are semi ridiculous, it’s easy to overlook with Priests vibrant prose. Fathom is one hell of a journey through an amazing imagination. It’s worth reading for the gothic tale being told as well as the deeper themes being played with. The ending rings true to the color of the work as the whole, making this a satisfying stand-alone read that will, in one way or another, occupy your thoughts well after you finish the last pages and surface for air.
I will throw out a warning that some stuff in this book might be disturbing to certain readers. There is some gore that could make readers uncomfortable.
4/5 stars