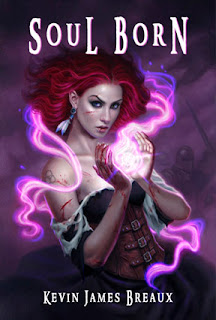 All Opal wanted was to be respected as a wielder of magic, but her teachers passed her over time and time again. When a mysterious warlord embarks on a conquest to destroy the lands of Illyia Opal seizes an opportunity to step out from the shadows of her instructors and take her rightful spot among them.
Tala, an alluring young elf, was banished from her tribe, hunted and nearly killed by the beasts that dwell in the deep forests, but more than anything else she is a survivor. Joining forces with an ancient elemental power Tala finds herself in the center of an unrelenting human war. She never wanted any of this.
Flesh like leather and bone as strong as steel Karn, a veteran from the first kingdom to fall, is fueled by vengeance. While pushing ever headlong into battle Karn begins to recall memories of another life; ghosts that haunt his dreams.
Through death of soul, their world is born.
I don’t know.
How’s that for the start to a review? In this context, “I don’t know” means a lot of different things. I don’t know how to start this. I don’t know what to say. I don’t know how to say it. I don’t know how reactions will be. I just don’t know.
The thing is, I have a really soft spot for fledgling authors (which is why I accept their books to review so often). It comes from a lifetime of watching my father try to make it as an author. I feel bad for the writers who are trying to break through the crust and dive deep into the pool of the published. It’s a hard plunge to make and even harder when the economy is terrible and a lot of people are pinning their hopes on the dream of their prose being realized for the grand art form that they are.
Breaux is a really nice guy and I’m sure if I knew him in person we’d be friends – which only makes this review harder because my next moment of honesty is, I’m sure, what every author least wants to hear. I couldn’t finish this book. Thus, this won’t really be a review in the normal sense because I don’t quite feel qualified to do so. I feel obligated to write something, however, as I promised him a review and any press is better than no press.
Breaux is a new author and this book reads like a new author’s first book. That’s not necessarily a bad thing, but Soul Born won’t hit it off with everyone. It’s rather graphic and I think it could handle a bit more editing (there is an overabundance of the words magic, magical and powers that got on my nerves very quickly). The plot is interesting; the twists keep things moving at a fast clip. If characterization falters and world building is minimal, the plot should sustain you.
That being said, Breaux does show promise, though I think Soul Born could have been a hit if he had spent a little more time adding depth to the world and fleshing out characters as well as evening out some of the writing. This is the first book in a trilogy and I’m sure the other books will only get better.
While this book didn’t quite make it for me, many of the reviews I’ve seen out there have been raving about how wonderful it is. Thus, it might work for you where it missed with me. Soul Born kind of reminded me of a more mature, grittier Dungeons and Dragons style action-adventure book. If that kind of thing appeals to you, this would be worth looking at. The only way to know is to give it a try. Regardless, Soul Born is a valiant effort by Breaux.