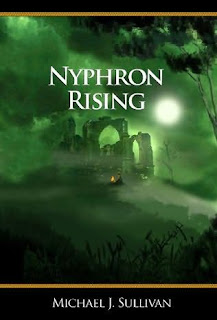 About the Book
War has come to Melengar. To save her realm, Princess Arista must reach the leader of the Nationalists and convince him to join forces. She turns to two trusted mercenaries to provide escort, but finds the team on the verge of dissolution.

Hadrian is tired of his lecherous profession and longs for a just cause. Royce knows a secret which could provide his partner a life’s purpose greater than anything his friend could imagine…but is it true? Or is an ancient wizard using them as pawns in his own struggle for power? To unravel the truth Royce convinces Hadrian to join him for one last mission—what they discover could change the future for all of Elan.

This book will be somewhat hard for me to review because the reading of it was broken in to two distinct sections for me – as life “happened” right in the middle of reading it. Thus, I feel like I read the first half, had a break, and had to reintroduce myself to the book as a whole before I finished it. That’s not a big deal, but when something happens that causes me to break the reading of a book up like that, it seems to be harder to write the cohesive, well thought out review that the author deserves.
Nyphron Rising is the third book in Sullivan’s Riyria Revelations series. This book picks up after the events of the last two, where the Nyphron Empire is rising to be a formidable power and, of course, the world has to flex around this threat and react to it. This is the crux of the book. The characters from previous books have all changed and developed in some surprising ways. Royce and Hadrian are involved with Princess Arista to gain allies against the Nyphron Empire threat and adventure ensues.
While the first two books were fairly stand-alone, Nyphron Rising is dependent on the happenings in its predecessors to fully understand it. I actually think of this as a plus. I enjoyed how this installment in the series carried on the events which happened in the first two books, while adding to the world. The necessity of reading the first two books in the series before this one also causes Nyphron Rising to nicely tie together loose ends and gave the series a sense of continuity I think it was somewhat lacking before.
While Royce and Hadrian do take center stage in Nyphron Rising, Sullivan expands his main characters by one, adding Princess Arista to the mix. While Sullivan has caught some slack for making Arista a bit of a damsel in distress in previous books, he makes up for it here. She’s an interesting, compelling character who has some surprising developments and truly harnesses her “girl power.” While Royce and Hadrian were, as always, the attention grabbers of the book, Arista was a very positive addition to Nyphron Rising as a whole. She served to shake things up a bit and add a little diversity to the main cast which the book really benefitted from.
Sullivan’s writing is always reliable and excellent. He somehow manages to expand the world, cultures and characters without any long, heavy-handed diatribes and info dumps. It’s quite refreshing to see how he manages to keep the plot tightly focused and always moving relentlessly forward while subtly building the world and developing characters as he goes.
Nyphron Rising manages to expand on the overarching series plot while fleshing out old characters and introducing new ones. One thing I always enjoy about Sullivan’s books is how much he builds on his main characters in each book. For example, in Nyphron Rising, the reader will take a journey to Hadrian’s birthplace and a lot of who he is. Sullivan could have fully fleshed out his characters in The Crown Conspiracy, but he didn’t. He chose to slowly develop them over each of his books and that’s a huge benefit to the series as a whole. The characters never seem stale and the reader is assured that, even though the main characters will probably stay the same in each book, new revelations about who they are and where they came from will keep the cast and crew all feeling fresh and new from book to book.
While I could laud Nyphron Rising’s praises, there were a few minor issues that stuck in my mind. For example, Arista’s sudden love interest toward the end of the book felt a little too contrived to my mind. Some of the action scenes felt somewhat campy and predictable. Overall, those are very small complaints in the grand scheme of things and very easy to overlook.
Nyphron Rising is a book that succeeds by its incredible character development, high quality writing and a compelling plot. It’s another grand installment into the series and retains the same quality of excellence I was looking forward to from reading the previous two books. Sullivan does not disappoint. The Riyria Revelations is a series that is quickly becoming my “go to” series for quality writing and a refreshing blend of old and new fantasy tropes.
4.5/5 stars