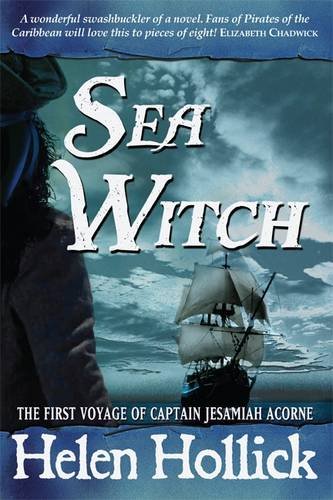 The time: the golden age of piracy- 1716
The Place: the Pirate Round – fromSouth Africa to the Islands of the Caribbean.

Escaping the bullying of his elder brother, from the age of fifteen JesamiahAcorne has been a pirate, with only two loves – his ship and his freedom. Buthis life is to change when he and his crew unsuccessfully attack a merchantship off the coast of South Africa. He is to meet Tiola Oldstagh, aninsignificant girl or so he thinks – until she rescues him from a viciousattack, and almost certain death, by pirate hunters. And then he discovers whatshe really is; a healer and a midwife – and a white witch. Her name, an anagramof “all that is good.” Jesamiah and Tiola become lovers, despite herguardian, Jenna Pendeen’s disapproval, but Stefan van Overstratten a Cape TownDutchman, also wants Tiola as his wife, and Jesamiah’s half brother PhillipeMereno, is determined to seek revenge for a stolen ship and the insult of beingcuckolded. When the call of the sea and an opportunity to commandeer abeautiful ship – Sea Witch – is put in Jesamiah’s path, he must make a choicebetween his life as a pirate or his love for Tiola; he wants both – but Merenoand Von Overstratten want him dead. In trouble, imprisoned in the darkness andstench that is the lowest part of his brother’s ship, can Tiola with her Craft,and the aid of Roux, Jesamiah’s quartermaster and the rest of his loyal crew,save her pirate? And can she keep Jesamiah safe from another who wants him forherself? From the elemental being that is Tethys, Goddess of the Sea? Acharismatic pirate rogue and a white witch – what better combination for astory of romance and high-sea fantasy adventure

Thanks to the author for sending me a copy of this book to review.

—–
Idon’t generally accept self-published books for review. I usually strike outwith self-published books so I gave up trying quite a while ago. After somequeries from self-published authors that start with fantastic lines like “h ru” (instead of “how are you?”) or “Hello Melissa” (uh… my name is SARAH, thankyou very much), I’m sure you can understand why that is. Then, Helen Hollick, aself-published author wrote me and we had a discussion about publishing and books in general. I wasfeeling adventurous, and after talking to her I realized that she might be theperfect self-published author for me to get my feet wet with self-publishing.
Sea Witch isn’t the type of book I’dnormally read. It involves boats (which is something that generally turns meoff, as discussed here) and romance, which almost always turns me off. Furthermore,there aren’t many books featuring pirates I’ve read that haven’t beencookie-cutter and rather stereotypical for that sort of thing. With all thethings this book had stacked against it, it’s rather surprising that I actuallydid enjoy it.
Hollickobviously did her research when writing this book. Hollick’s writing makes CapeTown really come alive and imbues it with a sense of the time. Furthermore, andI should personally thank her for this, she includes a well labeled graphic ofa ship at the front of the book for readers (like myself) who know absolutelynothing about any sort of craft that floats on the water. She also peppers herbook with plenty of pirate culture. These factors all combined really make Sea Witch shine.
Sea Witch is a cross-genre book. It’s ahistorical fiction and romance having a small tryst with fantasy. There is awhite witch, some subtle magic and a sea spirit which, while it doesn’t takecenter stage in the book, plays a very important role in what happens. Due tothe fact that this book seems to flirt with several different genres, it couldeasily appeal to a wider audience. Fans of historical fiction won’t necessarilybe turned off by the fantasy aspects of SeaWitch, as they are subtle enough to not hit most readers in the face, butthey are also featured just enough to also please fantasy fans and the romanceisn’t the steamy ripping-of-the-bodice stuff that one might expect. The linebetween genres is something Hollick straddles well in Sea Witch.
Romancetends to be something that can make or break a book for me. The romance in Sea Witch was touching, if absolutelypredictable. Predictability isn’t always a bad thing, and it wasn’t in thisbook. However, the way the two lovers came together did seem ratherunbelievable. While it is obvious who will end up together, there was no reallong, drawn out flirty courtship that a reader would expect. Instead it seemedthat a switch was flipped between these two characters which brought thingsfrom “off” to “seriously on” in about a page, flat. I found this to be veryunbelievable, as romance doesn’t generally happen this way. However, Hollickdoes have an explanation for why these two characters became so serious, sosuddenly so the issue I have with this romance might not be an issue foreveryone who reads Sea Witch.
Hollickhas been published before, and it’s obvious with her practiced and lyricalwriting style. She is descriptive and her characters are well fleshed out. Herworld is vibrantly realized and the plot never ceases its unrelenting pace. Sea Witch is a book that many readerswill easily become absorbed in. However, it does have some minor editingproblems. There are a (very) few awkwardly placed, or missing words. Somecommas could be added, or subtracted, from certain sentences, and there is onesentence in particular that made no sense to me no matter how much I tried tofigure it out. While I do mention those issues, it should be noted thatHollick’s writing and the book itself is tightly wound enough that most readerswill be able to overlook these flaws. There aren’t enough of them to alter theflow of the book or ruin anyone’s understanding of the overall plot or what’sbeing said.
Jesamiah Acorne and Tiola are fun characters. Both are scarredfrom events in their pasts and struggling to move forward in life. Because ofthat, both characters are surprisingly human and relatable. They are colorful,and three-dimensional. If I couldn’t fully believe all of their actions, theirlikeability helped me easily overlook this. On the flip side, the two main “bad”guys in the book were almost stereotypical with their roles. The parts theyplayed in the plot were predictable and, in comparison to Jesamiah and Tiola,they were very two-dimensional. While this didn’t absolutely hinder myenjoyment of Sea Witch, it did occasionallymake me roll my eyes.
In the end, SeaWitch wasn’t a book I expected to enjoy at all, but I did. While it didhave its problems, Hollick’s blend of historical details, polished writing andan emotionally compelling plot, coupled with likeable characters made this booka fun, easily enjoyable escape from reality. The fact that Sea Witch seems to play with several different genres will make itincredibly accessible to a broad spectrum of potential readers. This is aself-published book that gives self-publishing a good name.
3.5/5 stars