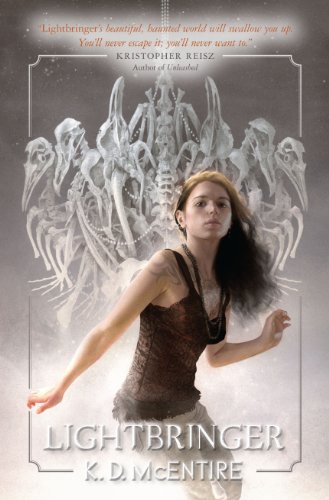 About the book
The Never is a place of greys, a world a breathbeyond our own, layered just past the memories of yesterday and the fleetingpresent moment. It is here, in this dismal limbo, that ghosts such as Piotr,Lily, and Elle must sort out an existence, both protecting the children calledLost and themselves from the walking darkness that is the army of rottingWalkers.

Caught between her duty to her calling as theLightbringer and her concern for her new ghostly friends, Wendy must walk theline between the two worlds, aiding Piotr in his fight against the Walkers aswell as searching out the wandering soul of the one who means the most to her.Time, however, is running out and in the end… who will she choose?

300pages (hardcover)
Publishedon: November 25, 2011
Publishedby: Pyr
Author’swebpage
Thanks to Pyr for kindly sending me a copyof this book to review.
—–
I’vebeen on a young adult kick recently, which is odd for me because I tend to notenjoy young adult books. I’ve lucked out, though. I’ve actually been enjoyingthe recent flood of young adult books that have come my direction. It’s been arefreshing change of pace from my usual reading routine. Lightbringer is one of those young adult books I didn’t expect toenjoy, but ended up with more than I anticipated.
Lightbringer takes place both in ourworld, and in a world parallel to our own called The Never. This parallel worldis a place where life and death exist together. It’s easy for readers to graspthe ins and outs of this parallel world. One hiccup that may exist for somereaders is regarding terminology (for example, the terms used to describe thedead like Rider, Walker, Lost and Shade), which readers will have to figure outas they continue with the book. The Never does take a little time getting usedto, but once the reader is familiar with the rules that govern this world, itbecomes obvious that McEntire has done a wonderful job at seamlessly blendingour world, and the world ghosts inhabit to create something wonderful, enticingand new.
Lightbringer is rather refreshing in thesense that none of the book is wasted on the protagonist, Wendy, coming toterms with her role as a Lightbringer, or a person who brings lost souls intothe light. Instead, when the book starts, she is already fully aware of herrole in this department, and while there is a bit of a backstory as to how shewas trained to handle her abilities, the book is written as if the readeralready understands what Wendy’s role is, and is comfortable with it. It’srefreshing change of pace in the fact that it lacks the time many books spendon the protagonist coming to terms with their abilities or their newunderstanding as to how the world “really” is. Another interesting aspect ofWendy’s abilities is that the author never really addresses what happens afterWendy brings the souls into the light. Actually, Wendy herself doesn’t seem knowwhat happens to them other than the fact that she’s sending them into the trueafterlife. Thus, the reader is left wondering if Wendy is doing these souls afavor, or dooming them to some less happy place. Wendy’s ability, therefore, israther ambiguous. As the story progresses, Wendy starts to question what she’sdoing and all the things she was taught, which leaves her, as well as thereader, an interesting fog of confusion which seems to add to the emotionaldepth of the book.
Wendyherself is a character of extremes. She can be understanding and loving on onepage, and a few pages later she can shock the reader with her abrasive, angryattitude. While the reader may feel sympathy with her plight in life, there areoccasions where her negative attitude can be grating. In this way, I personallyfeel she truly reflects a teenage girl (as most of them can be ratherhot-and-cold at times). Thankfully, others around her point out this attitudeflaw and she remedies her behaviors. However, her unwarranted snapping atothers can be rather off putting, though more positive aspects of herpersonality nicely balance her negativity.
Theantagonist, the White Lady should be mentioned as McEntire does a wonderful jobat making her antagonist incredibly easy to loath. While many authors are goodat making a fitting antagonist, I doubt I’ve ever seen one so artfully done ina young adult book. Though readers may guess who the White Lady is before thebig reveal takes place, it’s still great reading about her. The White Lady’sdialogue, especially toward the end, might really enflame the reader; it’sactually quite entertaining to read about a negative character that is so welldone in a young adult book.
Lightbringer does take some time to getinto, which might cause some people to quibble with the pacing, but at the endof the day this is a refreshing twist on a paranormal young adult book. Lightbringer isn’t filled with sappy,unbelievable romance, nor does it have a large chunk of the plot dedicated tothe protagonist coming to terms with her abilities and her new understanding ofthe world. Instead, the reader is thrown into a story where the protagonist, anincredibly strong, if hot-and-cold, teenager is dealing with her life as a highschool student trying to keep her family together, as well as her plight tofind her mother’s lost soul. It’s a touching tale, and a harrowing one, andabsolutely not what you’d expect from a young adult book about ghosts. It’s afantastic change of pace, and one I highly recommend.
4/5stars