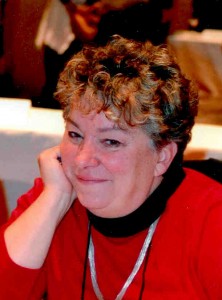 I don’t even know what else to say besides that. Carol Freaking Berg is writing something for MY blog. Holy cow.

Carol Berg holds a special place in my heart. She’s one of the first fantasy authors I was introduced to that I absolutely loved. I still remember my brother Paul telling me, “I emailed Carol Berg and she actually wrote me back!” My brothers and I are huge fans of hers. Plus, her writing is amazing. She has a way with words that makes her lyrical prose seem almost effortless. Her books are full of incredible descriptions, intense and powerful emotions and characters that you will never, ever forget. Her stories are so incredibly real that they are almost haunting, and that’s the kind of book I love the most – the books that stick to you, and somehow change you long after you finish reading them.

I asked Carol if she’d be willing to write for this event because she’s pretty hard on her characters – she makes them overcome quite a bit in her books so I figured she fit the bill. That, and because I really respect pretty much everything she says. Carol is quite profound, and thinks through topics very thoroughly. I always enjoy what she says and learn from it. Anyway, I pretty much told her what this event was about, and said that she could write about whatever she wanted as long as it fit the theme. She offered to write about one of the characters (Dante) in her new series Collegia Magica, who suffers from blindness, and the process of writing a blind character. With complete disclosure, I honestly think I almost passed out from fangirl excitement when she agreed to write for this.

Former software engineer Carol Berg never expected to become an award-winning author.  But her thirteen epic fantasy novels have won national and international awards, including multiple Colorado Book Awards and the Mythopoeic Fantasy Award for Adult Literature. She’s taught writing in the US, Canada, Scotland, and Israel, and received reader mail from the slopes of Denali to beneath the Mediterranean.  All amazing for one who majored in math and computer science to avoid writing papers.  Her novels of the Collegia Magica have received starred reviews from Publishers Weekly and Kirkus Reviews, using words like compelling and superbly realized.  Learn more at http://www.carolberg.com

And here she is, folks! Welcome her warmly.

Somewhere, someone once said, Write what you know.  I hate that phrase.  For many years, I took that to mean Write things that you’ve personally experienced.  No one wanted to read about my life – teacher, software engineer, wife, mom.  Quite ordinary and boring to those looking for adventure.  I kept reading.

Jump ahead a few decades.  I’d read a few thousand books by now and internalized that not every author had experienced everything in his or her stories, not when someone could make me believe hobbits existed, or that this world was only a shadow of an idealized place called Amber.  These writers were fiction writers.  It was their job to make me believe in the reality – and yes, the underlying truth of their story.  When I took up fiction writing as a hobby, I wasn’t sure I could instill that same sense of belief in other people.  But the more I worked at it, the more I learned that I could—by thinking hard, by working hard to know what I was talking about, by considering what it might be like to live in a culture or situation or a profession far from my own experience.

Yet I still heard people saying don’t.  Don’t try to write people of a different gender.  I got past this one, too.  I was not only writing from the point of view of two characters who were warriors, but they both happened to be men.  I had certainly observed plenty of men!  I thought hard about how their feelings or reactions might be their own, not mine.  I worked hard to make their voices, concerns, and behavior right for their characters and the story.  And male readers told me I did just fine.  And then I wrote from the point of view of a ten-year-old boy (later sixteen-year-old) and that worked, as well.

But I decided that if I could write men convincingly, and if I could write two very different warriors convincingly when I had no combat training or experience, then I ought to be able to write these things too.  I am fiction writer, and I use knowledge, imagination, logic, and reason to make my characters’ behavior and experiences true to the human experience as it exists in the fictional worlds I create, and close enough to the human experience in this world that my readers find them believable and identifiable.

But when the tides of the storyline in one of my series swept my brooding, violent sorcerer hero into blindness, I did feel trepidation.  This was new territory.  I very, very much wanted to get it right, to avoid TV/film/fictional cliches, to avoid any hint of paternalism or pandering or any other thing that might ruin the story for any reader.  And yet I didn’t hesitate.  It was the right thing for the story, which was about all about seeing – seeing the truth of magic in a world where it was dying, seeing the truth of a wicked conspiracy, seeing the truth of oneself and of those you could not believe might find you worthy of love or compassion.  It was only fitting that this man face the loss of the thing that he valued above all things – the sight that enabled him to work the most complex forms of magic.  So how was I going to do this right?

Part of my challenge was physical – how does a man cope with blindness in a society comparable to the early 17th century?  Part was emotional – how does a man of a passionate, volatile nature react to an abrupt change that he can only view as devastating? Note that this is his view, not my own—a critical distinction when dealing with such topics.  My aim was not to preach about how loss of sight is not a “disability” but just another way of dealing with the world, but to relate this man’s feelings about and reactions to what had happened to him.  And part of my challenge was authorial – how do I communicate a vivid sense of a world without using visual images?

So how did I approach it?

The internet is our friend.  I read medical information about the mechanisms of sight and its loss.  More importantly, I found forums and blogs by the newly blind giving personal perspectives – emotional, physical, and how those affected day-to-day life.  It didn’t matter that it was 21st century information.  I was accustomed to translating human experiences to a less techo-savy century.

I never research too much before I begin writing.  Knowing how the story unfolds tells me what I need to focus on in research.  As I wrote, I considered every word, phrase, scene, and situation from this perspective.

I was fortunate to know a fellow writer who has been losing her sight for many years.  I asked if she would read my early chapters and give me her opinion, as I was trying to get it right.  She was pleased to be asked.  Not only did she give me a few pointers, but gave me a most invaluable reference – a man who had lost his sight profoundly and abruptly at very near the same age as my sorcerer.  He was delighted to help and, as it happened, had done so for other writers.  Not only did he vet my chapters (and say I’d done a decent job!!) but answered my every question and offered me some wholly unexpected insights.  I wish I could have used everything he gave me!  But, as always, one can’t burden the story with all the delicious research.

Hard thinking.  First-hand information.  Respect.  Focusing on the story.  I think these things got me through.  The result is found in my novel, The Daemon Prism, the third (and final) novel of the Collegia Magica.

Carol Berg’s new series, Collegia Magica, is wonderful and worth your time to read it. The third book, The Daemon Prism, was released this year. You can read more about the books here and you can buy them at all your regular places. Furthermore, if you want to learn more about the fantastic Carol Berg, please visit her website!