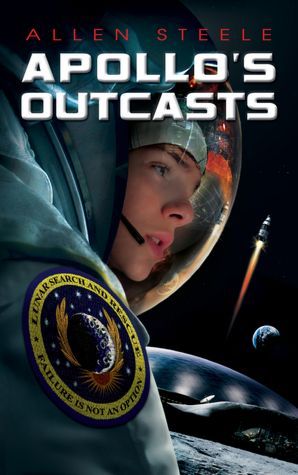 In the tradition of Robert A. Heinlein’s juvenile classics, crafted with a modern sensibility. Jamey Barlowe has been crippled since childhood, the result of being born on the Moon. He lives his life in a wheelchair, only truly free when he is in the water. But then Jameys father sends him, along with five other kids, back to the Moon to escape a political coup detat that has occurred overnight in the United States. Moreover, one of the other five refugees is more than she appears. Soon Jamey is front and center in a political and military struggle stretching from the Earth to the Moon.

You can purchase a copy of this book by clicking on the following links: Apollo’s Outcasts

I like science fiction and I don’t read nearly as much of it as I should. I’ve probably read a handful of young adult science fiction books in my entire life. For some reason I have a hard time finding them. Anyway, when Pyr asked me if I’d like a review copy of Apollo’s Outcasts, how could I say no?

Jamey, the teenaged protagonist, is a character that will fascinate readers from the start. Born on the Moon, Jamey has a disability on Earth which keeps him in the futuristic version of a wheelchair. First, after my Special Needs in Strange Worlds series, I now always find myself interested in characters with disabilities. Secondly, Jamey’s disability interested me so much because it points to another very unique aspect of this young adult book: the science.

Usually in young adult books I expect science to be watered down or nearly nonexistent. I especially expect that from young adult science fiction. It’s hard to explain some of these complex theories to a younger audience in a way they’ll understand and retain an interest. However, Steele uses Jamey’s handicap in such a way that readers can’t help but learn the science. Since Jamey is a living example of how gravity can effect human bones, readers will automatically learn about the force of gravity. Steele’s incredible grasp of understanding and conveying complex scientific theories doesn’t stop with Jamey. In fact, the habitat on the Moon is also another way for Steele to teach his audience quite a bit about the universe, and he does it masterfully. The nerd in me loved the fact that, no matter your age, you will undoubtedly come away from Apollo’s Outcasts learning and appreciating something new.

That being said, the plot is rather predictable and harkens unto the age of classic science fiction and fantasy where stories focused on the unexpected “chosen one” who becomes the pivot point around which a larger issue/quest is centered. While that is usually a gripe in my reviews, it isn’t really in this regard. Apollo’s Outcasts is one of those books that will remind you of those classic tales you’ve probably read before. Steele’s obviously in-depth understanding of the science and his updated, believable technology keep the been-there-done-that bones of the plot fresh and invigorating.

Jamey is a very believable and fleshed out character to follow. He’s also incredibly compelling, as he has to live both with and without a disability through the course of the novel. It’s interesting to see how Steele has used his disability to shape him. Though Jamey has a few problems of his own, namely his inability to come to certain conclusions when he probably should. There are a few occasions when Jamey, despite being incredibly smart, realizes some very obvious things long after his fellow characters, or even the readers. This can be frustrating, as it can leave readers with a feeling that the book needs to catch up with where they are.

Many of the secondary characters fall flat and a bit too cookie cutter for my taste. The antagonist fills the traditional almost unbelievably evil role while the Moon colonists, and the people who travel there with Jamey, for the most part, are portrayed to be nearly angelic. This lack of depth in secondary characters can make the plot seem a little thin, though for the most part the adventure itself will help readers overlook some of these issues.

Aside from all the science and the attempts to triumph over evil, Apollo’s Outcasts has a dollop of teenage romance and some angst for readers who enjoy that sort of thing, though Steele keeps it from overpowering the plot. It’s a nice additive that will appeal to many readers and has a tendency to bring the science and political tension down to a more palatable level.

At the end of the day, Apollo’s Outcasts somehow manages to be nostalgic and refreshing at the same time. Jamey is a wonderful character to follow, and Steele really should be heralded for his understanding and adept use of science. While this book is billed as young adult, it’s easy to see how it could appeal to an audience that spans all ages. It’s adventurous, quick moving, and intense. Steele’s flowing prose will bring the world and situations to life and the fairly short length of the book makes this a quick read that won’t easily be forgotten.