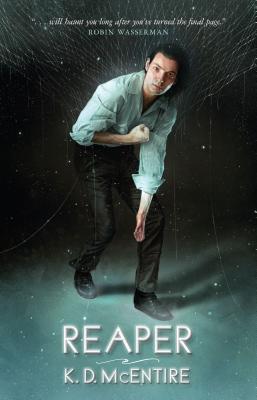 Reaper is set in a world a breath away from our own. After the death of her mother, Wendy is attempting to fill her mother’s shoes and discovering that the prospect is far more difficult than she ever imagined. Learning that she is part of a powerful and ancient family of Reapers that her mother had forsaken is just the first surprise—Wendy soon discovers that the San Francisco Bay Never is filled with political powers and factions both previously unknown and completely mysterious to Wendy. Since both her mother and Piotr are gone, Wendy must struggle to manoeuvre between the machinations of the dead and the dark intentions of her living Reaper family.

Eventually betrayed and made sick unto death, the clock is ticking before Wendy will fall—she has only a matter of days to unravel the mysteries her mother left behind and to convince her wary family to accept her as one of their own.

You can purchase a copy of this book by clicking on the following link: Reaper (Lightbringer)

I’ve noticed a few things about Pyr’s new line of young adult books, and this observation makes me endlessly pleased.  While I can always count on Pyr to produce top quality books, their young adult line pleases the part of me (which is a larger part than I’d like to admit) that really doesn’t enjoy young adult books that much. Pyr’s young adult books are more mature, less full of angst than most that I’ve run across. It’s incredibly refreshing, and the part of me that looks at young adult (much like urban fantasy) and recoils, starts to relax and ease into each YA book Pyr throws my direction. So huzzuh to them.

Reaper starts off where Lightbringer ends. Reaper is pretty much owned by Piotr. While the book is split between him and Wendy, Wendy seemed a bit more confused and less developed than Piotr and thus, he seems to propel the book forward. McEntire really delves deep with his character and his search for answers to his mysterious past. Piotr evolves and grows to be a more frustrated and angry character than I expected him to be. He also gains quite a bit of depth and really achieves an ability to hold his own, where I often felt that he had a pushed-around air in Lightbringer.

On the other hand, Wendy is searching for answers of her own regarding her family heritage, and plenty is revealed in that regard. Some of these reveals readers will expect, and some will come as huge surprises. Perhaps the most frustrating aspect of Wendy is how sidetracked she seems to get with other people/activities/chaotic plot elements that seem to slip in at the worst possible time. There were a few occasions where I thought, “Okay, we’re finally getting somewhere so I’m expecting the author to throw in something that will totally derail Wendy within the next few pages.”

Despite that small complaint, McEntire really takes the world building in Reaper to a whole new level. The world, magic system, ghostly elements, the Never and everything else that she began building in Lightbringer are elaborated upon. McEntire adds so much depth and dimension to her world that it’s actually rather surprising. Readers might have had questions about the different types of dead before (Reapers, etc) but McEntire answers all of those, and fleshes out those answers in a masterful, non infodumping sort of way. She should really be noted for that. The world in Reaper shines brightly, and is incredibly, vividly real.

McEntire also has also managed to balance her plot incredibly well. As Reaper progresses she seems to answer the perfect amount of questions readers will have from Lightbringer, as well as posing new ones as the plot(s) unfold. This is no small feat and it shows incredible growth as an author. McEntire seems to find the perfect balance between treating the reader, and dangling carrots before them to keep them going. Along with the added depth with characters and world building, I’m sure many fans of Lightbringer will be immensely pleased with Reaper and the author’s obvious growth and development.

Speaking of plot, McEntire ramps up the complexity quite a bit, adding a dash of political tension, some danger both in our world and in the Never, as well as the reveal of plenty of backstory, which adds a load of tension and danger to an already precarious situation. It’s quite amazing that McEntire manages to balance all of this in a young adult novel, and do it in such a way that Reaper never loses its young adult appeal. Inevitably (and somewhat predictably), Wendy and Piotr somehow find themselves in the center of a pivotal situation which could spell the death of both of them.

This wouldn’t be a proper Bookworm Blues review if I didn’t harp on the romance a bit (because, honestly, I have issues with romance in books). Wendy and Piotr’s interesting relationship really adds a unique dynamic to Reaper. While there aren’t many young adult books without some sort of romantic angle, McEntire keeps this relationship from straying too far into the cliché-angsty-teenage-swoon book that I’d expect from YA (sorry, but I gotta be honest). First, Reaper has a darker vibe than many other young adult books I’ve read, and their relationship is a testament to it. Secondly, and perhaps most welcoming, McEntire makes a very strong point of making their feelings for each other, and their relationship obvious, while keeping both Wendy and Piotr from straying into the I-can’t-live-without-you territory that seems to crawl under my skin the wrong way with many young adult books I’ve read.

That being said, readers should be warned. Reaper ends on a huge cliffhanger.

When it’s said and done, Reaper is a step above and ahead of Lightbringer. McEntire has grown immensely between her two books and while Lightbringer showed immense potential, Reaper lives up to that potential. Though there are some minor issues with characterization and plotting, Reaper is sure to please. It’s a strong second installment in a young adult series that I have enjoyed immensely so far, and I’m not saying that lightly, as I usually don’t mix with YA well. McEntire has not only proved that she has a promising career as a complex, layered, and talented author, but that she also has the ability to redefine the young adult genre.