Use of Weapons – Iain M. Banks 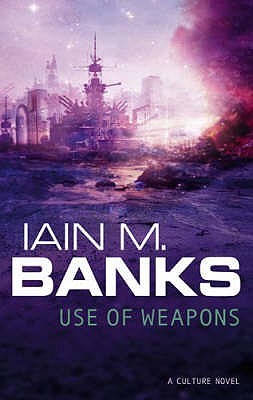 The man known as Cheradenine Zakalwe was one of Special Circumstances’ foremost agents, changing the destiny of planets to suit the Culture through intrigue, dirty tricks or military action.

The woman known as Diziet Sma had plucked him from obscurity and pushed him towards his present eminence, but despite all their dealings she did not know him as well as she thought.

The drone known as Skaffen-Amtiskaw knew both of these people. It had once saved the woman’s life by massacring her attackers in a particularly bloody manner. It believed the man to be a burnt-out case. But not even its machine intelligence could see the horrors in his past.

You can purchase a copy of this book by clicking on the following links: Use of Weapons (Culture)

, Use of Weapons (Culture) – Kindle

Don’t forget to check out my 25th anniversary GIVEAWAY by clicking here.

Use of Weapons was recommended to me by a fellow blogger who assured me that this was the best book ever written in the history of mankind. Period. Of course this made me incredibly excited, so I automatically purchased the book and started reading it. Oddly enough, I found it rather hard to get into. Then, I was told to try reading either Consider Phelbas or Player of Games and try again. I followed that advice and I’m glad I did. My second attempt to read Use of Weapons was much more successful than the first.

While Banks’ Culture novels are standalones (which is wonderful), the world(s) and culture itself can be rather cumbersome for new readers to understand. Therefore, I would pass along the advice that I was given to read one of the previous two books before you start on books further in the series. While Use of Weapons is more of a character study than a culture study, being introduced to, and familiar with, the culture before you hit the character study in Use of Weapons will help immensely by allowing readers to really focus on events and character rather than spending time puzzling out various social and technological nuances.

That being said, one of the things that constantly appeal to me about Iain M. Banks is how thought provoking his novels are. While his plots are fascinating, he has an amazing way to engage the readers in what is happening, while occupying their thoughts long after with the deeper themes he so easily toys with. Use of Weapons is the same way, only magnified quite a bit. The characters are fascinating, and the situations are riveting, but it’s the ability for Banks to occupy your mind long after you read the book that really shows his success.

It should be said that there is quite an impressive, and deftly done plot twist toward the end of the book. Usually I can sense these things coming, but this one really took me by surprise, and that’s quite delicious and rare for someone who reads as much as I do. While the plot twist does change everything, it won’t make the book any less fun to reread. In fact, I’ve read this book twice now and find that knowing about the plot twist adds an incredible new dimension to events as they unfold.

Perhaps where some readers will have issues is with the timeline. Use of Weapons deals with two different courses of events, one moving forward and another moving backwards. It might take readers some time to figure out which plot thread is going what direction though it will be incredibly easy to keep them apart and differentiate between the two. If this novel fails to hook some readers, I think it will be due to the interesting use of two timelines rather than anything else.

Zakalwe is nothing short of a brilliant protagonist to follow. He’s an amazing tactician and military strategist. However, he is haunted by his past. Banks peels away layers of Zakalwe with each chapter like layers of an onion. This is where the timeline issues might come into play, as many of Zakalwe’s chapters deal with his past, and they are interspersed with chapters that focus on the present. While it might take readers some time to understand why and how the two timelines are so intimately tied together, eventually it is all revealed.

Banks never seems to underestimate his audience. He never dumbs things down. His humor is deft and sometimes very subtle. His characterization is top notch, and he manages to weave in some of the most incredible descriptions in the most unexpected times. The world and characters spring to life and the smattering of humor throughout a novel which is notably darker in tone (to me) than Player of Games, really helps ease mental burden from the reader.

The ending really is mind-blowing, and totally worth reading the entire book for, despite some of the confusion readers will face. The truth is, Banks is a master at manipulating, educating and pushing his readers and that’s worth celebrating. Use of Weapons might be frustrating to some, but its tone is completely different from Player of Games, and that just shows how versatile the author is. It’s a quality book that is sure to impress.