A Once Crowded Sky – Tom King 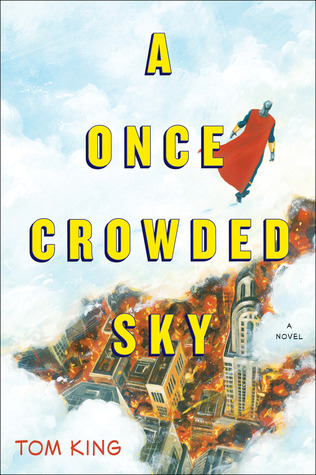 A tour de force debut novel from a former CIA counter-terrorism officer, A Once Crowded Sky fuses the sensibility of bombastic, comic-book-style storytelling with modern literary fiction to bring to life a universe of super men stripped of their powers, newly mortal men forced to confront danger in a world without heroes.

The superheroes of Arcadia City fight a wonderful war and play a wonderful game, forever saving yet another day. However, after sacrificing both their powers and Ultimate, the greatest hero of them all, to defeat the latest apocalypse, these comic book characters are transformed from the marvelous into the mundane.

After too many battles won and too many friends lost, The Soldier of Freedom was fine letting all that glory go. But when a new threat blasts through his city, Soldier, as ever, accepts his duty and reenlists in this next war. Without his once amazing abilities, he’s forced to seek the help of the one man who walked away, the sole hero who refused to make the sacrifice–PenUltimate, the sidekick of Ultimate, who through his own rejection of the game has become the most powerful man in the world, the only one left who might still, once again, save the day.

You can purchase a copy of this book by clicking on the following links: A Once Crowded Sky: A Novel

, A Once Crowded Sky – Kindle

I’ve written the author, Tom King, about a hundred times apologizing for being so late with writing the review of this book. I still owe him an interview, too (as well as a few other authors). I’m so dramatically behind on reviewing and interviewing and various other blog stuff, but I can’t apologize too much. I’m behind because I’ve been so busy working on Triumph Over Tragedy and that’s a worthy cause, so I appreciate the various authors who have been waiting so long for their reviews, so patiently.

I’m not a graphic novel fan. In fact, I don’t think I’ve managed to pull myself through even one. For some reason, I see pictures and I turn off and completely lose interest. While A Once Crowded Sky is billed as a hybrid novel/graphic novel, a lot of the graphic novel nuances are completely lost on me. There are a few comic strips throughout the novel, and sections are broken apart and numbered like, I’m assuming, graphic novels – in episodes, for lack of a better description. (Are graphic novels numbered like that? See, I know nothing about them.) The main gist of the graphic novel hybrid portion of the book is lost on me, and true to form, I mainly skipped over the graphics. They are small, usually a page or so long, and I never felt like I missed anything important by glossing over them. Thus, this review might be unfair because I can’t really judge it the way it deserves to be judged.

However, I am an adept novel reader, so I can judge that aspect of A Once Crowded Sky. There were many parts of this book that King did a wonderful job with. Basically, all the superheroes have lost their powers and King explores what happens to them once their identities, which were so dependent on their superhuman abilities, have been taken away from them. Some are in therapy; some drink too much, some try to forget what they once were altogether. Only one main character really retains any of his superhuman skills and he has his own mental battles to face. I must admit, King did a wonderful job at portraying just how people would deal with an altered identity in many different ways. The thought and care he put into their various ways of coping with their new reality really was well done and very realistic.

Like many superhero novels, A Once Crowded Sky takes place in the fabled city of Arcadia where heroes and villains had been accepted by the general populous and the various catastrophes that they bring along with them are seen as normal parts of daily life. Also, like many superhero books, some almost unbelievable evil supergenius is just waiting in the wings to strike over…and over … and over again. When you believe he/she has been defeated, he’s really just waiting in the wings to strike again for whatever almost unbelievable evil purpose he has set himself. This isn’t really a complaint against A Once Crowded Sky, but an observation regarding books of this nature in general. It’s repetitive and though it’s interesting and well done, the end is always the same. You think evil has been defeated, the game changes, and you have to wait to read book two to see how the band of superheroes will triumph against all odds.

Then again, that’s part of the fun of reading novels like this. You know what to expect. The stories might change, but the general flow of events, the rise and fall of characters, usually follow the same basic mold. There’s nothing wrong with that. In fact, that sort of storyline appeals to lots of people. Why do you think movies like Batman are so successful? Why do so many people enjoy comics and graphic novels and why do you think characters like Captain America and Superman are age old classics? It’s not because their stories are fabulously unique, but it’s because they are so completely engaging. Superhero novels might all follow the same basic boiled down plot paths, but that doesn’t stop them from being immensely enjoyable to so many people.

Perhaps one of the main issues A Once Crowded Sky faces is how long I takes the author to progress the story. You’ll read through the same situation several times through several different perspectives before you move onto something else. This can be frustrating. For example, it takes nearly four pages to describe a character dodging a bullet and all the emotional backstory it drums up. It takes almost a (long) chapter of reading about the same situation through the perspective of three or four different characters before you can continue on to what exactly the situation was leading to. It’s frustrating, and causes the pace to lag quite a bit when it doesn’t really need to. I should note that, while I harp on this in my review, I’m not sure if this is one of those graphic novel aspects of the book. I don’t know if graphic novels commonly deal with situations in this way.

That being said, King has a knack for bringing his characters to life in stressful situations. He shows them realistically dealing with their new reality, mourning their old life and changing to fit their new one as new threats rise against them. A Once Crowded Sky, despite its faults, is an action packed story with plenty of raw, believable emotion. While many of the graphic novel aspects of the book are completely lost on me, I can appreciate the novel for what it is and all King is trying to do with it. What it all boils down to is this: A Once Crowded Sky is a fun, fast paced book and King’s blending of novel and graphic novel sets him in a small, but ambitious group of authors who dare to go where no other author has gone before.