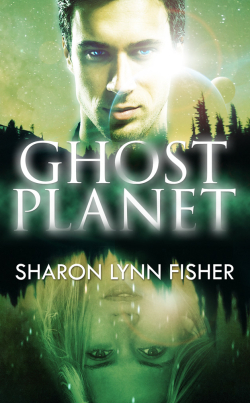 Psychologist Elizabeth Cole prepared for the worst when she accepted a job on a newly discovered world—a world where every colonist is tethered to an alien who manifests in the form of a dead loved one. But she never expected she’d struggle with the requirement to shun these “ghosts.” She never expected to be so attracted to the charming Irishman assigned as her supervisor. And she certainly never expected to discover she died in a transport crash en route to the planet.

As a ghost, Elizabeth is symbiotically linked to her supervisor, Murphy—creator of the Ghost Protocol, which forbids him to acknowledge or interact with her. Confused and alone—oppressed by her ghost status and tormented by forbidden love—Elizabeth works to unlock the secrets of her own existence.

But her quest for answers lands her in a tug-of-war between powerful interests, and she soon finds herself a pawn in the struggle for control of the planet…a struggle that could separate her forever from the man that she loves.

This book was provided for review by the publisher.

You can purchase a copy of this book by clicking on the following links: Ghost Planet

Ghost Planet isn’t the type of book I’d usually read and review. The cover shows it to be a romance, and it is. Not being a fan of romance books in general, you might wonder why I decided to read this book when it was presented to me. The reason, actually, is quite simple. I’ve never read (or heard of) a romance book set on another planet with some very science fiction details. I had to give it a try. Anyone willing to try their hand at a very exhausted genre in a science fiction setting deserves to be tried out. That’s brave of the author, and I respect that bravery.

The crux of the planet centers on ghosts, or poltergeists. Psychologist Elizabeth Cole decides to escape her old life to go to this planet and study the relationship between ghosts and the people who inhabit the planet. It’s obvious at first that the relationship between the living and the dead is an odd one, at best. The humans live vibrant, full and relatively normal lives, while the dead people from their past trail after them in poverty. At first, the reader thinks of them as true ghosts, but it becomes very clear that they are something different entirely. They need food, and there are ghost depots scattered throughout the cities where these ghosts get energy bars for food and second hand clothes. They eventually become starved, no matter how much they eat, as what they truly want is interaction with humans, but humans are forbidden it.

Once Elizabeth realizes she’s dead, an interesting dynamic builds. She’s no longer alive, so she has a unique perspective on a planet that’s facing an interesting dilemma. The relationship that forms is obvious and rather predictable, but the author also uses it in an interesting way to highlight social issues between both the ghosts and the humans. Instead of being a book about romance for romance’s sake, Fisher uses romance as a great plot device to explore facets of the planet that she otherwise wouldn’t have been able to reach.

On top of this, Fisher had a great ability to bring the world to life with her writing. She truly did a wonderful job at portraying the absolute isolation and starvation the ghosts feel with some raw, realistic emotion in her prose. That is, perhaps, Fisher’s true strength as an author. She did a wonderful job at not only portraying emotion, but writing emotions into Ghost Planet in such a way that I couldn’t help but feel them myself.

However, nothing is perfect. While Elizabeth and Murphy use their bond to challenge social norms and explore why things are the way they are (I’m remaining vague to save some important plot points from being spoiled), and questions are answered, I never felt that they were answered to my satisfaction. In fact, some aspects of the book still don’t make sense to me, though I know they probably should. The author highlights the growth of vegetation often, and while Elizabeth and Murphy seem to figure out the various myths about the vegetation, and I understand a bit of it, it still seems a bit nonsensical to me. There are other aspects of Ghost Planet which feel the same way. While there are answers that are presented to the reader, some of them either made little impact, seemed rather unimportant or didn’t fit into the narrative as well as I’m sure the author hoped it would.

Ghost Planet does contain some tacky and predictable romance aspects, but you have to expect that sort of thing going into it. It’s obvious from the cover art, as well as the synopsis. While I still don’t enjoy romance, and parts of this romance did annoy me, I must give Fisher props for writing a book that involves romance as a main plot thread, without making me lose complete interest ten pages in (like I usually do with romance).

While the world was fascinating, it was the book’s biggest strength and weakness. Ghost Planet is wonderful and unique in that it takes place on another world with very different social structure and some complex conflicts that arise from this. However, I didn’t feel like Fisher thought out all the reasons, or answers, behind many of the situations that have risen on this planet  very deeply. Thus, while providing answers, I never really felt satisfied by any of them. The romance was a wonderful plot tool to attract readers of that genre, as well as readers like myself, who are more averse to romance but fascinated by the unique setting. The highlight, however, was Fisher’s ability to not only portray emotion with her prose, but make the reader feel those emotions just as strongly as the characters. Though readers should make note: the ending was pretty cheesy.