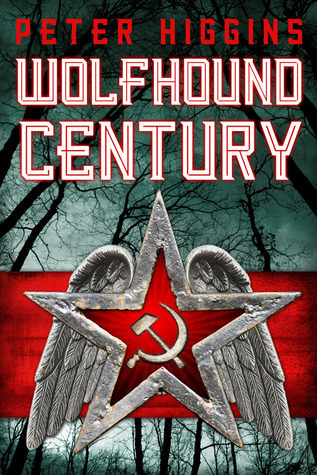 Investigator Vissarion Lom has been summoned to the capital in order to catch a terrorist — and ordered to report directly to the head of the secret police.

A totalitarian state, worn down by an endless war, must be seen to crush home-grown insurgents with an iron fist. But Lom discovers Mirgorod to be more corrupted than he imagined: a murky world of secret police and revolutionaries, cabaret clubs and doomed artists.

Lom has been chosen because he is an outsider, not involved in the struggle for power within the party. And because of the sliver of angel stone implanted in his head.

To purchase a copy of this book, click here: Wolfhound Century

I’m sick of noir. I really am. I have just read way too much of it this year. So when Wolfhound Century arrived at my door, I was understandably skeptical. A noir novel set in Russia? I just expected the same old, same old. Russia is typically written as a depressing place with rainy gray buildings and plenty of complex political tensions. Along with that I expected fairly typical noir characters – a private detective of some sort who is jaded and full of quips.

Well, that’s not really what I got.

The chapters in Wolfhound Century are fairly short, and switch perspective. This book also isn’t that long. Those two elements combined have a sort of combined positive and negative effect. The short chapters and multiple perspectives keep things moving quickly and the perspectives keep Wolfhound Century fresh. The short length, however, can have the adverse effect with pacing. Some readers might feel that the first half of the book is a set up and the second half is incredibly fast moving to play catch-up.

While some might have issues with the pacing, the world is fascinating and Higgins really deserves respect for it. It takes a certain amount of guts to write an alternative history. You have to really know your stuff, and you can’t be afraid to stay true to the tone and events that most readers will be familiar with while adding your own bit of fantasy to them. It’s a hard balance, and I’m sure that balance is probably why so many authors seem to shy away from writing alternative histories. Russia is an interesting location to set a story. Not many westerners are familiar with much more than the main events in Russian history (gulags, czars, communism, etc.). One thing most of us associate with Russia is the atmosphere, cold, gray and filled with overworked, downtrodden people. While I can assure myself that that really isn’t an accurate summary of the country, due to the dark events I am familiar with, that’s the tone I associate with Russia, and Higgins uses that to his advantage.

Higgins also has a very firm grasp on Russian history, and Wolfhound Century is filled with plenty historical tidbits and interesting lore he’s “fantasied up” nicely. All of his historical information and little factoids are nicely woven into a pulse-pounding romp through an incredibly atmospheric alternative Russia. It’s absolutely fascinating, and makes the world building intense first chunk of the book totally worth wading through. Higgins doesn’t just build a world, he also thrusts the reader into it thanks to his incredibly adept use of an intense and stark atmosphere. Higgins really uses fear and self-preservation as tools to amp up the atmosphere in Wolfhound Century. Everyone is afraid, and everyone is telling on everyone else to someone, so self-preservation and a complete lack of trust is everywhere. It’s a very intense time, and Higgins uses these dark, almost isolating emotions to his advantage masterfully.

While Wolfhound Century does have chapters from numerous perspectives, the story really centers around Lom, a police man who is sent to investigate and stop a mastermind terrorist. Lom quickly gets sucked into the gritty underbelly of Mirgorod. This is really where the noir feel kicks in and it’s also where the plot starts moving at a breakneck, edge of your seat, pulse pounding pace. With the familiarization of Higgins alternative Russia firmly set up and understood by this point, readers will really be able to be sucked into the events as they unfold and truly be able to enjoy them.

Higgins’ writing is an excellent tool he uses to develop his wonderfully three-dimensional characters, move his plot quickly, and build an incredibly rich world. He really doesn’t waste words. Wolfhound Century is descriptive without being overdone. This tight writing keeps things moving quickly and keeps the author from getting sidetracked with his own verbosity and really allows the reader to focus on the plot and characters while getting all the creepy atmosphere Higgins adds to things without even really realizing it.

Perhaps my only real complaint regarding Wolfhound Century would be the ending. While things end rather naturally for this book, the ending felt like it dragged a bit and I was disappointed with a lack of any real resolution, which we’ll have to wait for in further books. That’s a first-book problem. The world is nicely set up, the plot is amazing, but the ending fails to do anything more than set up for the next book. I’m probably being too hard on it, but the thing is, I loved this book. I absolutely loved it, and now I have to wait for the next book for my itch to be scratched and that’s probably a year off and THAT SUCKS. So, I guess in a way this griping about the ending is really just me showing my fandom because honestly, I just can’t wait to see what happens next.