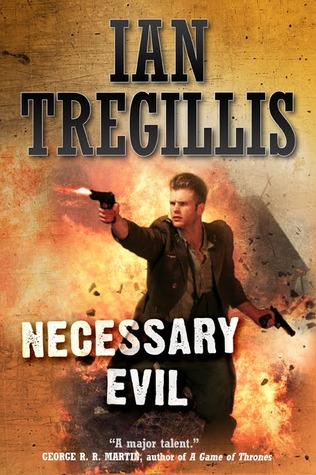 Raybould Marsh, one of “our” Britain’s best spies, has travelled to another Earth in a desperate attempt to save at least one timeline from the Cthulhu-like monsters who have been observing our species from space and have already destroyed Marsh’s timeline. In order to accomplish this, he must remove all traces of the supermen that were created by the Nazi war machine and caused the specters from outer space to notice our planet in the first place.

His biggest challenge is the mad seer Greta, one of the most powerful of the Nazi creations, who has sent a version of herself to this timeline to thwart Marsh. Why would she stand in his way? Because she has seen that in all the timelines she dies and she is determined to stop that from happening, even if it means destroying most of humanity in the process. And Marsh is the only man who can stop her.

I’m mad as hell. Let me tell you why.

The “tri” in “triptych” means three. Necessary Evil is the third book in Tregillis’ series, which is the Milkweed Triptych. That means it’s the last book in a series that is one of my all time favorite reads in the history of ever and that ticks me off.

The problem isn’t that the ending is bad. In fact, the ending of the series is pretty perfect. The part that ticks me off so much is that the series is over and I’m just not ready for that. How dare Ian Tregillis have an insane talent for writing and how dare he write a series I can’t help but be absolutely obsessed with. The sheer audacity of the guy for writing something this amazing and then letting it end!

Necessary Evil is the magnum opus of this series. It truly is a perfect, gut wrenching, and absolutely absorbing ending. The surprising part of it (for me) is the fact that it deals with time travel (which usually turns me off instantly) and still managed to be interesting, engrossing and believable. These are qualities I usually don’t find in books that deal with time travel. That being said, we’re talking about Grandmaster Tregillis here, so I can’t really expect anything he writes to be the usual. No, he takes the usual, twists it, redefines it, and throws it at the reader and lets them deal his new creation.

Necessary Evil deals with all of the characters we were introduced to throughout the series. What’s different is that there are two Raybould Marshes, one of whom is the younger version we were introduced to in the first book and the other Marsh is older, battle scared and time worn. This version travels back in time to try and stop an absolute catastrophe from happening. Mixed into this is Greta, who is one of my favorite, most creepy, literary characters any author has ever created. Greta is just as creepy as she was in all the other books, but this is magnified a bit because all her weirdness, her random sentences and odd behavior in other books are suddenly understandable. The reader finally gets to see the motive behind her madness, and in one part you can’t help but be in absolute awe of an author capable of inserting that kind of genius so subtly into his series. On the other hand, you can’t help but be in awe of Greta because, well, come on! That kind of manipulation is damn impressive.

This is, perhaps, where I really need to give Tregillis some serious accolades. Throughout the past two books, random things have happened, Greta has said some weird things at random times that made no sense to anyone, not the readers, nor the characters. She’s done odd things, manipulated events, and before now it’s all seemed like it was for no apparent reason. Greta was just insane and that’s what insane people do. It isn’t until Necessary Evil that the reader will really realize just how incredibly detailed and meticulously planned the plot of the entire series really is. I call Greta a genius, but she’s only a genius because Tregillis is a master manipulator of his readers. Necessary Evil is one of those books where everything suddenly comes together, and all the small details you might have puzzled over in previous books click in place. It’s a book full of those wonderful “ah ha” moments that I absolutely love. Necessary Evil is a book where you can’t help but admire the mental capacity of an author who has created such an intricate plot, and somehow managed to make every little tiny detail in three incredible books make perfect sense.

The plot is fast moving and just as dark as it’s been throughout the series. That being said, it’s not all doom and gloom. Tregillis weaves in quite a bit of hope and light throughout the book. Sometimes the silver lining is subtle and the reader might have to look for it a bit, but it’s always there. There’s a lot of love, and the actions of Marsh, who pretty much gives up everything to save his family, is nothing short of humbling. Perhaps that aspect is slightly overshadowed by some of the action, but it deserves to be noticed. Marsh is a man who is so in love, so dedicated to his family he gives up everything for the fragile hope that he can make things right. This really balances out the darkness nicely, and gives this superhuman tale a bit of sympathetic humanity that gives it some fantastic depth and light.

The plot of Necessary Evil is just as fast paced and intricate as all the other books. In fact, with the time jump going on, I’d say it’s even more intricate than the other books. It’s detailed and riveting. Tregillis ends his series with one hell of a bang, but somehow that fits. It’s dark and atmospheric. His characters are raw and real, but it’s the details that really make Necessary Evil stand out. It’s those details that show Tregillis for the literary grandmaster that he truly is. Necessary Evil is the end of a series that rocked my world. It’s a series I’ve already read twice, and I have every intention of reading it over and over again. Necessary Evil ties everything together nicely and the complex, fast moving, incredibly dark plot is the icing on the cake. This is an edge-of-your-seat read that had me saying (very unprofessionally), “holy shit…” in absolute reverence over and over again.

And I’m mad as hell, because the series is over.