The Curve of the Earth – Simon Morden 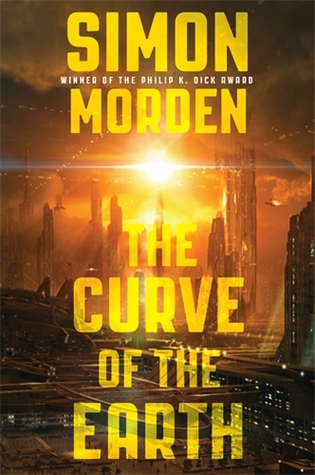 Welcome to the Metrozone – post-apocalyptic London of the Future, full of homeless refugees, street gangs, crooked cops and mad cults. Enter Samuil Petrovitch: a Russian émigré with a smart mouth, a dodgy heart and a dodgier past. He’s brilliant, selfish, cocky and might just be most unlikely champion a city has ever had. Armed with a genius-level intellect, extensive cybernetic replacements, a built-in AI with god-like capabilities and a plethora of Russian swearwords – he’s saved this city from ruin more than once. He’s also made a few enemies in the process – Reconstruction America being one of them. So when his adopted daughter Lucy goes missing, he’s got a clue who’s responsible. And there’s no way he can let them get away with it.

You can purchase a copy of this book by clicking on the following links: The Curve of The Earth

, The Curve of The Earth – Kindle

When I first started my blog roughly three years ago, I was a heavy fantasy reader with a flair for epic fantasy and had very little science fiction under my belt. Now, three years later, my tastes have (predictably) changed. Now science fiction captivates me and I have a harder time getting into epic fantasy quite as much as I used to. Science Fiction, in my mind, is almost completely untapped, probably because I’ve read so little of it. But it’s also really interesting to see how authors envision the future, especially when you take into account the events happening around them when they write their futuristic novels.

The Curve of the Earth is a book that flew below the radar. It’s set in a sort of futuristic Earth. Politics and the whole “the earth is flat” thing have effected how people live, communicate, work and understand each other. The world is a different place. Some areas, like the America, are ultra conservative, while others are downtrodden and rather terrifying, ruled by crime bosses. It’s a world where crossing the Atlantic takes a fraction of the time it takes now. In a world like that, the proverbial ripple of a butterfly’s wing can cause massive, sprawling political and ecological impacts world wide in a matter of minutes. It makes today’s digital, satellite, and almost instantaneous world look like a snail’s pace in comparison.

Metrozone, the London of the future, a post-apocalyptic nightmare of street gangs, hoods, crime bosses, and weird cults, is truly a one of a kind place for a story like The Curve of the Earth to take place in. Metrozone is an area that frightens most, but it is basically ruled by Samuil Petrovitch, a Russian émigré. Petrovitch truly is the star of the show, and if I’d been halfway smart about reading this book, I would have realized that there was a Metrozone trilogy that was released before this book. While I don’t think it’s necessary to read said trilogy before you read The Curve of the Earth, reading it first might help sort out some of the problems with details that I found confusing as the book started.

Perhaps it is those details which is the greatest drawback of this book. While things do become easier to understand as the book progresses, at the start it’s hard to understand the political system, the ways people communicate to each other, why Metrozone is such a dark, scary place, and exactly why the name Samuil Petrovitch is at once notorious and feared. As I mentioned, these things iron out as the book progresses, but it can be a bit frustrating and it does occasionally feel like you are in foreign water with no real landmarks by which to navigate.

Petrovitch’s best friend is a genius AI named Michael, who appears on and off throughout the book offering insights and various tidbits of information that will help you piece together what exactly is happening and what has happened to create the world as it currently is. Michael is a wonderful addition to the story, he adds a bit of stability to Petrovitch’s sometimes over-the-top cockiness and eagerness to stir the proverbial pot. Speaking of which, Petrovitch is a little bit of everything. He’s human, political criminal, a ruler and leader of sorts, a sarcastic ass, completely unafraid and a cyborg. He’s larger than life, so it’s somewhat ironic that his AI companion Michael is his balancing factor.

The Curve of the Earth moves at quite a quick pace, which is another reason why I think being somewhat aware of the details of the world before you start the book might be a good idea. Morden is unrepentant. His writing is fluid and often so detailed and lush you can get lost in it, but the intricacies that he weaves into this quick moving tale are truly mind blowing. It’s part adventure, part 1984, and possibly an eerie glimpse into an ominous future. Regardless, the protagonist and his team are an absolute riot to follow. Petrovitch is hilarious, and while he is occasionally hard to believe, it’s his companions, like Michael, that keep him grounded and believable. The Curve of the Earth is an adventure with a deep message hidden at its core and plenty of pulse pumping action.