Wisp of a Thing – Alex Bledsoe 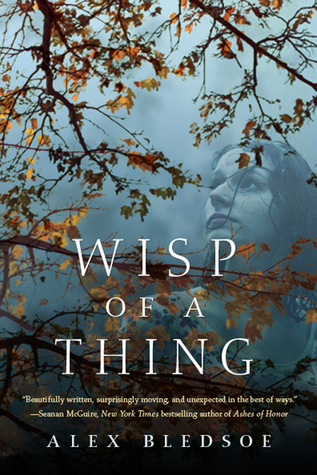 Alex Bledsoe’s The Hum and the Shiver was named one of the Best Fiction Books of 2011 by Kirkus Reviews. Now with Wisp of a Thing Bledsoe returns to the isolated ridges and hollows of the Smoky Mountains to spin an equally enchanting tale of music and magic older than the hills….

Touched by a very public tragedy, musician Rob Quillen comes to Cloud County, Tennessee, in search of a song that might ease his aching heart. All he knows of the mysterious and reclusive Tufa is what he has read on the internet: they are an enigmatic clan of swarthy, black-haired mountain people whose historical roots are lost in myth and controversy. Some people say that when the first white settlers came to the Appalachians centuries ago, they found the Tufa already there. Others hint that Tufa blood brings special gifts.

Rob finds both music and mystery in the mountains. Close-lipped locals guard their secrets, even as Rob gets caught up in a subtle power struggle he can’t begin to comprehend. A vacationing wife goes missing, raising suspicions of foul play, and a strange feral girl runs wild in the woods, howling in the night like a lost spirit.

Change is coming to Cloud County, and only the night wind knows what part Rob will play when the last leaf falls from the Widow’s Tree…and a timeless curse must be broken at last.

You can purchase a copy of this book by clicking on the following links: Wisp of a Thing: A Novel of the Tufa (Tufa Novels)

, Wisp of a Thing: A Novel of the Tufa (Tufa Novels) – Kindle

With the release of Wisp of a Thing tomorrow, I figured today would be the perfect day to write and post a review. I’m hoping to get a lot of people to start reading Bledsoe’s Tufa series because, honestly, there’s really nothing like it. And that’s a good thing.

The protagonist, Rob, finds himself traveling to Tufa territory after the death of his girlfriend. While most people who go to Tufa country are looking for their heritage, Rob is going because he had been told that he would find a song there that would mend his broken heart. He is unique to the area because he isn’t Tufa and, instead, is looking for one of their sacred songs. In the midst of looking for said song, he uncovers a curse and finds himself in the middle of a complex and somewhat subtle power struggle.

As with most things Tufa, the magic is subtle and the culture has a long, very ancient feel to it. Even after reading two Tufa books, I still feel as though I am only grasping about half of their culture and lore. While that might annoy me in other books, Bledsoe makes that a real benefit. With the addition of Rob, an outsider who has no Tufa blood, the world expands quite a bit, and I found myself understanding the Tufa world and culture a bit more through Rob’s eyes. I attribute this to the fact that Rob has about as much understanding of the Tufa as the rest of us do, so we discover, uncover and understand as he does.

Rob goes to the Tufa for one purpose, and it becomes quite obvious (especially after the second half of the book) that he has been drawn there for a very different reason entirely. This is where quite a few characters readers were introduced to in The Hum and the Shiver make an appearance. Bliss herself takes quite a leading role in the proceedings. A lot is learned about her complex family history, and a little more is learned about the interesting and rather complex power struggle between the Tufa. Due to the fact that Rob is a man, and Bliss’s chapters are few and far between, the reader won’t really learn much more about the important role of powerful women in Tufa society, which is something that I regretted.

It becomes obvious that Rob is the catalyst that will change Cloud County and the Tufa tradition permanently. He isn’t afraid to stick his neck out for what he feels is right, and he learns that doing that will change everything for the Tufa. With such a long, illustrious history, any change will have a long, lasting effect on the Tufa. This is, perhaps, why Bliss seems so torn and hesitant throughout the book. She is the first one who realizes just what Rob has been brought to them for, and change doesn’t come easy for people who are so rooted in tradition. While she realizes what he has been brought to do is important and necessary, it also terrifies her. It’s rather fascinating to be let into the emotional turmoil that Bliss goes through as her understanding of Rob’s purpose in Cloud County.

Perhaps my only true complaint was the ending, which felt a little awkward, considering all that had happened before it. The relationship that unfolds, while expected, doesn’t have the natural feel and flow to it that I had grown used to in the rest of the book. That being said, it’s a small complaint, because the section I’m talking about takes up about the last three pages of the book and, by that point, the reader will be so invested in the events that unfolded they will probably not mind a bit of an unnatural feel to things, especially when that feeling is so short lived.

Wisp of a Thing is another powerful addition to the Tufa series. The viewpoint of an outsider, Rob, really brought a helpful dynamic to the book that will help readers understand and relate to the mysterious Tufa in a new and more relatable way. It’s also interesting to see how Rob grows and develops throughout the book. Bledsoe slowly reveals what is really going on as book progresses, dropping well-measured hints as he goes until everything is revealed. It’s obvious that Bledsoe has a lot more to reveal with the Tufa, and Wisp of a Thing will just make you want to learn more and more about these mysterious people.

I fell in love with Cloud County and the Tufa in The Hum and the Shiver. Alex Bledsoe made me fall in love all over again with Wisp of a Thing. Wisp of a Thing is its own book and has its own distinct feel, but it leaves so much open for Bledsoe to explore in further books. I can’t wait to see what happens next.