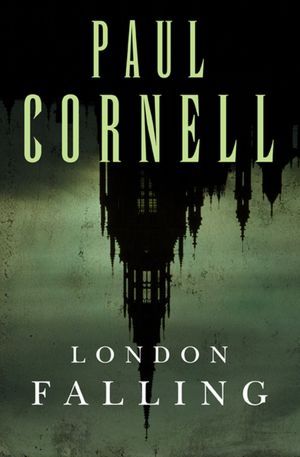 The dark is rising . . . Detective Inspector James Quill is about to complete the drugs bust of his career. Then his prize suspect Rob Toshack is murdered in custody. Furious, Quill pursues the investigation, co-opting intelligence analyst Lisa Ross and undercover cops Costain and Sefton. But nothing about Toshack’s murder is normal. Toshack had struck a bargain with a vindictive entity, whose occult powers kept Toshack one step ahead of the law – until his luck ran out. Now, the team must find a ‘suspect’ who can bend space and time and alter memory itself. And they will kill again. As the group starts to see London’s sinister magic for themselves, they have two choices: panic or use their new abilities. Then they must hunt a terrifying supernatural force the only way they know how: using police methods, equipment and tactics. But they must all learn the rules of this new game – and quickly. More than their lives will depend on it.

I’m not a huge fan of police procedural novels. I’ll read them, but I don’t tend to really get into them or enjoy them much. My one exception from that rule is evidently police procedural novels that take place in London because, well, lets face it. London is a fantastic city and there are plenty of interesting things that people can write/read about taking place there. Plus, it’s England and I like England.

London Falling is a pretty intense and dark novel, and while it does focus on police work, surprisingly that police work isn’t as oppressive as I’m use to police work being in novels. These are tried and true cops, but as events unfold around them, they seem to be more like scared humans and less like super hardcore lawmen. That’s a huge plus for me. When I really think about what I don’t enjoy about police procedural novels, it’s usually the fact that the cops seem to be more-than-human and their lingo is gruff and unnatural to prove how hardcore they really are. There is none of that strutting bravado here. London Falling is full of real people who react in real, believable ways to the surprising situations that unfold around them.

Cornell starts the book with an intense undercover operation wherein one of the members of the undercover group is obviously compromised. It creates an intense, incredibly dark atmosphere right at the start from which Cornell just grows and develops his story. This is, perhaps, where Cornell really shows his skill. He starts his book with this undeniable gritty and dark atmosphere, and while everything seems so “normal” at first, the author subtle adds the “other” until this book is an obvious urban fantasy tale, but you aren’t really sure it graduated from good ‘ol fiction to urban fantasy.

I should probably make one point clear. One of the reasons I struggle so much with urban and contemporary fantasy is because it’s so rare that I come across one of those books that doesn’t slap you in the face with the fantasy aspects of it. I enjoy my UF to be all “real world” (which requires it to be absolutely believable) with just enough subtle fantasy touches. It seems like these days so many authors are focused more on slapping their readers in the face with their (urban) fantasy, they therefore lack the subtlety and believability that I look for in my UF. Thankfully, Cornell is not one of those authors and I knew almost instantly that I’d enjoy this book for that fact alone, if no other reason.

The four main protagonists are fairly interesting, though readers might have a hard time connecting with all of them to one degree or another. Cornell does a wonderful job at giving each viewpoint character their own unique voice and motivations. Readers won’t ever forget who they are reading about or mesh characters together into one big amorphous blob in their mind. Some characters are darker than others, and in an already dark book, the darker characters might seem a bit overwhelming to some. Each viewpoint gives Operation Toto, and the various excitements surrounding that case, a unique and interesting air, which also gives the happenings a multi-hued dimension that I found absolutely irresistible.

Operation Toto starts out as an investigation into the odd death of a drug kingpen and then quickly turns into something else, as the four primary characters gain unique abilities and subsequently realize that there’s a supernatural serial killer on the loose (who is also oddly obsessed with a specific football team). The four cops have to use their abilities and their police resources to navigate their new London and figure out how to stop the serial killer. In this respect, Cornell does a great job at mixing the right amount of “real” with the “other” that a lot of readers will find so incredibly enjoyable. His prose are confidant and flowing. He never really shows rather than tells. However, he does often switch perspectives, and some of the switches do come across a little awkward and jarring to the narrative. That being said, Cornell paces things in such a way that the reader learns as the characters learn, and thus the surprises are never ending and the twists and turns are flawlessly done.

London Falling is one of those rare police procedural books that I actually think is interesting. While it is heavy on the police procedure, Cornell keeps all of his characters so incredibly human and flawed that the procedure part of things isn’t oppressive. The novel is paced in such a way that readers will unravel, figure out, and discover along with the protagonists. Cornell depicts the fantastical elements of London in unique, rather clever ways, and describes the reasons behind certain things and events plausibly. Readers might struggle with connecting to certain characters and sometimes the perspective jumping does distract from the overall narrative, but otherwise Cornell has created a living, vibrant, believable piece of dark urban fantasy that is not to be missed. He takes the typical UF mystery/police procedural novel and tips it on its head. The ending is satisfying, but left open enough for some exciting and interesting additions to the world. I look forward to seeing what happens next.