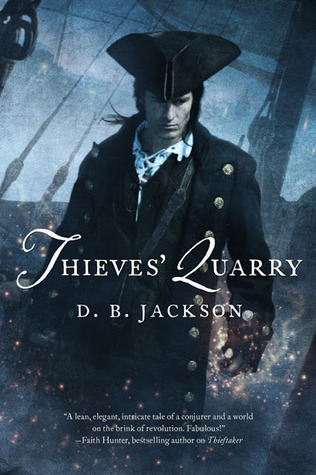 Autumn has come to New England, and with it a new threat to the city of Boston. British naval ships have sailed into Boston Harbor bearing over a thousand of His Majesty King George III’s soldiers. After a summer of rioting and political unrest, the city is to be occupied.

Ethan Kaille, thieftaker and conjurer, is awakened early in the morning by a staggeringly powerful spell, a dark conjuring of unknown origin. Before long, he is approached by representatives of the Crown. It seems that every man aboard the HMS Graystone has died, though no one knows how or why. They know only that there is no sign of violence or illness. Ethan soon discovers that one soldier — a man who is known to have worked with Ethan’s beautiful and dangerous rival, Sephira Pryce — has escaped the fate of his comrades and is not among the Graystone’s dead. Is he the killer, or is there another conjurer loose in the city, possessed of power sufficient to kill so many with a single dark casting?

Ethan, the missing soldier, and Sephira Pryce and her henchmen all scour the city in search of a stolen treasure which seems to lie at the root of all that is happening. At the same time, though, Boston’s conjurers are under assault from the royal government as well as from the mysterious conjurer. Men are dying. Ethan is beaten, imprisoned, and attacked with dark spells.

And if he fails to unravel the mystery of what befell the Graystone, every conjurer in Boston will be hanged as a witch. Including him.

Thieves Quarry is the second book in Jackson’s Thieftaker Chronicles series. It was also a very anticipated release for me. Jackson’s unique blending of fantasy and history rife with details captivated me with Thieftaker. This time Jackson dumps readers into a world rife with personal and political tensions, and it’s those tensions and relationships that will serve to pull readers in and hook them.

Thieves Quarry ups the historical ante. Jackson makes the world, the history, and the setting seem so much more alive and vivid to the reader than it seemed in the first book. There were occasions where I felt like I was getting the impromptu Highlights tour of the history, but by and large, Jackson makes his world even more vivid and realistic than he presented it in Thieftaker. It’s easy to picture the dusty, tense, politically confusing world that Ethan lives in, and it’s even easier to feel a sort of kinship and emotional involvement in his plight and the chaos that surrounds him.

Ethan’s character seems better rounded and better developed in Thieves Quarry. He has some interesting relationships on both the love and hate side of the coin which help balance him. Ethan’s relationship to Sephira is complex, but adds a nice zip to the book that is necessary. Sephira is a worthy adversary who seems to have everything that Ethan doesn’t. She has money, contacts, jobs, prospects… everything, while Ethan struggles in her wake. She seems to be a step ahead. It’s easy to hate her, but Jackson uses her well to up the tension and make things incredibly interesting throughout the book. Added to Sephira, Ethan has strained relationships with authority figures as well as others. There are a fair number of people that Jackson uses to up the tension and antagonize Ethan, and he uses them all well within the structure of the novel.

On the other side of the coin, Ethan has a few trusted sources, some that one might even consider friends, and a lover. While these relationships are less powerful than his interactions with his various adversaries, they still serve as a buffer of sorts. They add some tension and levity to what Ethan is going through, and they help show his softer, more humorous sides. In this respect, Jackson doesn’t only improve and evolve Ethan’s character, but he also shows various dimensions of the man himself through his relationships. Readers get to understand and feel right along with Ethan. The way Jackson uses Ethan’s relationships as a tool to help empower the plot, and strengthen character development is nothing short of wonderful.

Ethan himself is an interesting character to follow, even without his various relationships. He’s an older protagonist than I’m used to reading about. He’s already lived his life, and Jackson seamlessly inserts Ethan’s life experiences into the development of his character. Jackson could have easily made Ethan a political rebel, but his initial sympathies are with the British, which makes sense, considering his history. His evolution as the political struggles become more and more intense, and his mounting concerns are well done and realistic. Hats off to Jackson for that. Having Ethan side with the colonies right off and become some revolutionary hero would have been the easy, predictable road. Instead, he took the harder, but more believable road, and it pays off.

The plot is fast moving, and the mystery and various events that transpire are attention grabbing, but they aren’t what makes this book shine. It’s Ethan, and Jackson’s historical details that really makes Thieves Quarry stand out. Despite the fact that the plot is interesting, it lacks the depth that I pointed out previously. Furthermore, some points Jackson used Ethan’s magic to make the conclusions to events a little too easy, or unbelievable. With a book that is otherwise so colorful and full of vibrant dimension, the lackluster plot and liberal use of magic to solve problems was somewhat disappointing.

Thieves Quarry is a great addition to a very powerful and memorable series. Jackson’s development of characters, interpersonal and political relationships is fantastic, and his use of them to develop the plot, atmosphere and those very characters is remarkable. His use of history makes this book not only fun to read, but also a constant learning experience. Jackson has created something truly unique. He should be very proud.