Yesterday, I reviewed the book Billy Moon, a short novel which truly surprised me. I enjoyed it so much, I decided to interview the author. This also happens to be my first author interview after my cancer treatment, and it’s taking me some time to get back into the swing and art of interviewing. My cumbersome questions are evidence of this. Thanks so much to Doug Lain for being my (very interesting) test subject.

I hope you enjoy.

When you aren’t writing, or podcasting, what are you typically doing?

I’m very tempted to give a Zizekian answer to this question.  Slavoj Zizek is a Slovenian psychoanalysis and philosopher with a perverse sense of humor.  He’s said that, whenever he’s asked a question meant to humanize him, a question like “What do you enjoy doing in you’re spare time?” he’s always tempted to answer that he spends his spare time with his pornography collection and ripping the wings off of flies. The idea behind this answer is that he thinks that these efforts to humanize him are also unconscious efforts to neuter him and his work.  A more innocent answer to the question implies that, while Zizek might be a radical philosopher, we don’t have to worry about him because he likes hiking or preparing chocolate cakes or collecting stamps.  He’s just like us after all.

Still, in an effort to stand on my own I’ll mention that lately I’ve been playing the role of Inspector Lestrade opposite my eight year old son Noah’s Sherlock, but I should also confess that I tend to binge on Netflix and waste time on Facebook in my spare time.  I’m a big fan of Arrested Development and Firefly.

What started you on the writing road?

There were a combination of factors.  Mostly what drove the decision was my intense need for attention and my utter lack of talent in the performing arts. That is, I decided I’d be a writer during high school, after I failed to get the lead role in The Crucible. Instead I was given the role of the undertaker’s assistant.

After that I decided to get even with the golden boys in the drama department by becoming a writer.  I’d put the words in their mouths and make them spout my nonsense instead of Arthur Miller’s fine dialogue, but somewhere along the line I gave up on plays and screenwriting and wrote short stories instead.  In fact, that happened almost immediately. I recall I started submitting stories for publication during my senior year and made my first sale to a magazine called “The Fiction Primer” during my freshman year at college. The story was about a college student whose actress girlfriend broke his heart.  It was entitled “Never Wish Me Good Luck.”  One thing that was interesting about it, however, was that I originally wrote it out of sequence and used a framing device, just a bit of prose about the broken hearted ex-actor who was holed up in his dorm room, to hold the story together.  My creative writing instructor hated it and made me ditch the frame and put the story in chronological order.  His name was Sterling Watson.  I still resent him.

You podcast as well as write and blog. Can you tell the readers a little about your podcast? What started you podcasting?

My podcast has the same name as the ‘zine I used to edit which I actually first started publishing way back in 1993.  I can’t believe how long ago that is.  I started podcasting partly in an attempt to promote the ‘zine (although after my first podcast there never was another issue of Diet Soap the ‘zine) and partly because I was working a job at Comcast in Beaverton.  I was a sales rep at Comcast and I won an iPod Nano as a prize and started listening to a podcast called the C-Realm.  Around that time George Bush came on television and told everyone that he’d scheduled a rerun of the Great Depression.

So, again, the decision was overdetermined.  Still, I’d have to say that as the zero years closed out and the world teetered on the verge of economic collapse podcasting was my way of trying to figure out just what was going on.  Since 2009 when the podcast started I’ve interviewed a slew of philosophers, artists, and economists and I’d say that the last four years of weekly interviews has done quite a lot to shift my perspective.

You have a few short stories and short story collections published. Billy Moon appears to be your first full-length novel. Can you talk a bit about the differences between writing short stories and novels (besides the obvious difference in length)? Is one more difficult than the other? Why/why not?

I’ve found that writing a novel requires more patience than writing a short story.  I went through several drafts and made major changes late in the game, but that isn’t different because I do the same thing to almost all of my short stories. It’s just that, writing a longer work, means that radical changes take longer to accomplish.

The main difference between a novel and a short story is that in novels the characters are usually more sympathetic. This makes natural sense because you’re asking the reader to spend a lot of time with the characters. Of course, there are great novels with utterly unlikable characters, but being unlikable is not quite the same thing as being unsympathetic.

The other difference between novels and short stories is that, if you’re going to write a novel that holds to the same noise to signal ratio as a short story you have to have more to say.  That’s why writing about the events of May ’68 was helpful. It’s a subject worth spending time on. 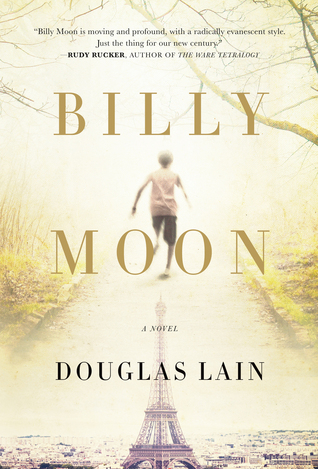 Billy Moon is an interesting book about the son of A.A. Milne, the author of Winnie the Pooh. What is it about Christopher Robin Milne that captivated you enough to write a book about him?

Christopher Robin Milne the man was a very mature, competent, and thoughtful person.  He was a veteran of World War II, a bookseller, a family man, and a naturalist.  He was a person who had come to terms with his childhood, and beyond that with growing up in the shadow of a fictional childhood as represented in his father’s books.  After reading his memoirs The Enchanted Places and Path Through the Trees I decided that a man like Christopher Robin, a man who had overcome his childhood quite consciously and willfully, was perhaps the perfect protagonist for a novel about May 1968.

Blending fantasy and history wasn’t difficult, but getting the history right, the culture right, was difficult.  I still am not confident that I was completely successful.  I’ve never lived in France nor do I speak French, so a lot of research went into writing Billy Moon, research that you might not pick up on.  I recall spending a lot of time researching the brand names for sandwich bread as opposed to baguettes, for example.  I read a book called French Frenzies: A Social History of Pop Music in France.  Of course, I read a great deal about May 1968.  I may own every English language book on the subject.

A lot of this book focuses on the very real and believable character Christopher Robin Milne. You do a great job at bringing this person to life, exploring how he grows, develops, as the book progresses. Were you ever afraid that you wouldn’t be able to realistically capture the voice of this person and bring him to life? How did you go about your research of him?

Seeing as how you wrote a historical fantasy novel, how did you create the surreal, dreamlike, and/or fantasy elements? In other words, how did you/was it difficult for you to create a realistic “magic system” inside of a real historical setting?

I wonder if I did create a realistic “magic system.”  What I aimed at doing was taking French radical theory literally.  So, for instance, I tried to use my understanding  of Althusser’s notion that ideology shapes and substantializes our social lives, even our identities, and transform that understanding into a liberalization or concretization.  I also lifted some ideas from Aboriginal Australia, basically a very Westernized version of the dreamtime, in order to put the French theory into the world.

I find this to be an interesting reaction because, to some extent, the relationships between the characters were also informed by French theory.  As I said at the outset, I’m a big fan of the psychoanalyst and philosopher Slavoj Zizek, and I tried to apply his notions about human families, authority, and identity to my characters.  Of course, every interpretation of a theory reveals as much about the interpreter as it does about the theory, so I’m sure that I did turn to my own experiences quite a lot as I wrote the book. Maybe using Zizekian philosophy as my guide to human relationships was a way to shield myself from the very personal nature of what I was writing.  I’m not sure.

I like the way the unreality in fantasy stories, the magic in them, can allow me to think about the problems that obsess me.  I majored in philosophy back when I was a young man, and writing science fiction and fantasy stories is maybe my way of keeping a hand in, that and doing a philosophy podcast.

My favorite SF writer, Philip K Dick, once said that “The very best science fiction ultimately winds up being a collaboration between author and reader, in which both create—and enjoy doing it, [experiencing] the joy of discovery of newness.”  I like that a lot.  I think writing in this genre is a great way to collaborate with readers as I try to think about the possibility of something new.

Thank you so much for your time. Is there anything else you want to add?

Nothing except some links.  That is, if you’d link to my podcast, my blog, my Facebook page, my Netlog (although I don’t know what that is), my twitter account, my tumblr, my book, my mother’s maiden name, and my favorite color I’d appreciate it.