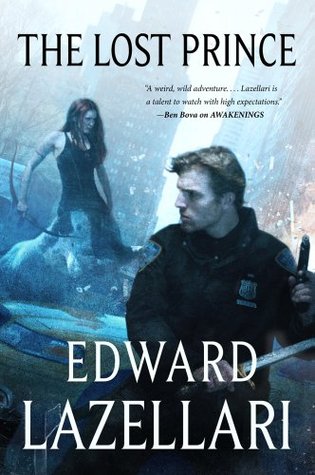 Edward Lazellari brings you The Lost Prince, and the race to find the missing prince is on . . .

In Lazellari’s debut fantasy, Awakenings, New York City cop Cal MacDonnell and photographer Seth Raincrest found themselves stalked by otherworldly beings intent on killing them. The two had to accept the aid of a mysterious woman to unlock their hidden pasts, and what they discovered changed their lives.

Everything they knew about their lives was an illusion. They had in fact travelled to our dimension from the medieval reality of Aandor to hide their infant prince from assassins, but upon arriving, a freak mishap wiped their memories. Cal, Seth, and the rest of their party were incapacitated, and the infant prince was lost.

Thirteen years later, that prince, Daniel Hauer, is unaware of his origins–or that he has become the prize in a race between two powerful opposing factions. Cal and Seth’s group want to keep Daniel safe. The other wants Daniel dead—by any means necessary.

From the streets of New York City to the back roads of rural North Carolina, the search for the prince sets powerful forces against each other in a do-or-die battle for the rule of the kingdom of Aandor.

I’ve learned over the years that I’m a real sucker for authors who aren’t afraid to mercilessly blend fantasy and reality. This smashing-together of worlds fascinates me. I love it when there are other dimensions, or worlds that are infused with mythological creatures. When these mythological creatures aren’t overly-sexed vampires/weres of some sort, color me purple with excitement.

I read Awakenings while I was in the midst of cancer drama, so I’m going to be totally honest here and admit that I really don’t remember much of it. That’s not a reflection on the author. Cancer treatment just about killed my memory. The combination of treatment and stress made a vast swath of my life fragmentary and shadowed, at best. None of that should really matter to any of you, aside from the fact that if you’ve read Awakenings, and your memory is complete crap like mine, never fear. The Lost Prince fills in the gaps quite nicely and brought me up to speed, triggering whatever half-functioning crap serves as my memory these days (thanks, cancer). Furthermore, if a book usually brings people up to speed, it involves lots of infodumps and long “remember when” type diatribes that drive me crazy. Lazellari, thankfully avoids all that sort of tedious stuff. He fills in the gaps in such an elegant way; you never really realize that he’s doing it.

This also means that instead of comparing The Lost Prince to Awakenings, like I normally would, I won’t. The Lost Prince stands well on its own two feet, and deserves to be reviewed as such, for that fact, as well as the fact that cancer axed my memory.

All of that being said, I do recommend people read Awakenings before starting on The Lost Prince. Due to the fact that this is the second book in a series, I will try very hard to be deliberately vague on any spoilerish details.

The Lost Prince starts out with our somewhat uncomfortable gang thrown together and traveling, looking for the prince they were supposed to protect. They are always a step behind the competition, and the stress is thick and pumped into the group dynamics smoothly and realistically. Cal and Seth are the main characters with the most compelling stories. They will inevitably serve to hook the readers. Their past is a mystery, and the mess of their lives is nothing short of fascinating. Lazellari follows them as they try to find the prince, as well as learn their place in the world and come to terms with their own fragmented pasts. It’s quite a compelling, emotional story. Furthermore, these two characters don’t really get along so well, so their own adventures together are often full of the sarcastic, tense humor that I tend to enjoy so much. Lazellari does a great job with really subtly bringin relationship dynamics to light, and playing with them in a tense, but often understatedly humorous way.

Daniel, the thirteen-year-old boy they are searching for is also a lot of fun, in a surprising way. I usually struggle quite a bit with teenaged characters because, honestly, I am not a teen, and I just can’t relate. Lazellari doesn’t dumb down Daniel at all. He’s full of enough adult emotions and sensations to make him easy for the adult audience Lazellari writes for, easy to relate to him and care about his story. That’s really saying something because, in all honesty, I really do turn off almost completely when a teenaged character is inserted into the book in any main fashion.

The Lost Prince starts out tense, and Lazellari keeps the tension ramping up higher and higher until the climactic finish. Awakenings ended on a cliffhanger, which really bothered a lot of readers. The Lost Prince works toward a nice, cohesive finish. Furthermore, questions are answered, while plenty more are raised, which promises another installation in this incredibly fun series. Lazellari works the plot twists well, and while some of the developments are easily predicted, the book itself is fun enough for that predictability to matter less than it probably would otherwise.

Lazellari broadens his world as well as his characters. While I did feel that the cast was, perhaps, a bit larger than necessary to tell the story, each character is interesting in their own way. Many of the characters that were added are secondary, and they do all vary in their level of believability. Perhaps my biggest characterization issue was with the characters of the “other side.” They nearly fell into the “unbelievable antagonist” trope that was really unfortunate. There is a point where the evil bastard is such an evil bastard he’s nearly laughable, and occasionally the antagonists would toe that line.

Another niggling point I would make is the fact that much of this book happens on the go. This endless-road-trip might not bug some readers (for example, fans of American Gods might understand how a constantly-on-the-move book can be fantastic). Not everyone will enjoy that format. It could feel, for some, like it’s a lot of movement without any real progress until about the halfway point. Honestly, I’m ready to experience Aandor, to move beyond the comfort of our world and see what else Lazellari is capable of.

Perhaps what impressed me most about this book was how well Lazellari blends fantasy and reality. Our world is still our world, but he weaves in the promise of something more so realistically that the reader can’t help but wondering, “What if?” This, combined with his realistic, engaging characters, really makes The Lost Prince is deliciously complex. Lazellari keeps things interesting, and the ending is a perfect culmination of adventure, action, and growth. Furthermore, his blend of answered questions, while posing the right amount of riddles for future books to work through, leaves me wanting more.