The Rose and the Thorn – Michael J. Sullivan 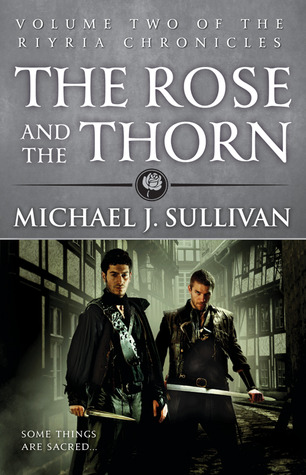 TWO THIEVES WANT ANSWERS. RIYRIA IS BORN.
For more than a year Royce Melborn has tried to forget Gwen DeLancy, the woman who saved him and his partner Hadrian Blackwater from certain death. Unable to get her out of his mind, the two thieves return to Medford but receive a very different reception — Gwen refuses to see them. The victim of abuse by a powerful noble, she suspects that Royce will ignore any danger in his desire for revenge. By turning the thieves away, Gwen hopes to once more protect them. What she doesn’t realize is what the two are capable of — but she’s about to find out.

There are a few authors running around that I think are truly inspiring for one reason or another. Blake Charlton is one because, really, look at where he came from and where he is now. Wow. Saladin Ahmed is another inspirational author because he truly embraces his cultural identity and infuses his work with it; making his books and stories some of the most unique, memorable works out there.

Another is Michael J. Sullivan. He started out self-publishing. Somehow he managed to get the attention of reviewers who are, by and large, not that interested in reading self-published books. Then he was noticed by my favorite publishing company (Yay, Orbit!), who then reprinted his series. Now he’s not only published by a huge, very amazing publishing house, but he has enough attention and readership to demand that he write another spin off series of his already popular series. Michael J. Sullivan has taken a journey so many writers dream of taking, and he’s done it with class and style. It’s inspiring. It truly is.

Perhaps what amazes me more is how well he’s managed to write his spin off series, which is also a prequel series, which are two things that usually turn me off right away. Another thing working for Sullivan is his ability to write a really engrossing sword-and-sorcery tale without adding a ton of language and over-the-top violence. Usually those are things I enjoy in my fantasy, but Sullivan’s books are books that I read out loud, on a regular basis, to my two-year-old. They also require minimal editing as I do so. Now, this really isn’t pertinent to my review, but my kid loves when I read to her, and it’s kind of refreshing for me to not have to say, “and then Jorg said, ‘Give her flowers,’” instead of “and then Jorg said, ‘F* you.’” or  instead of “let’s gut him” I say something like, “let’s have a barbecue!”. These things matter when your kid is in that delicious “repeating everything she hears anyone say” phase. Especially when she routinely throws books at me and has me read to her for hours on end. Sullivan’s books are go-to books when I’m reading out loud to the child. They have been for years now.

Honestly, it’s hard for me to be accurately critical of Sullivan’s work. He’s one of those authors that has found my sweet spot and dug in. He’s entered a sort of nostalgic realm that so few authors really hit anymore. I love his writing, because it’s easy, it’s fun, it’s deep but not too deep, and I am so emotionally engaged in the characters they have become part of me. As I also established above, I admire the author so much, for so many reasons. How could I possibly criticize the books that do that to me?

That being said, take all this for what it’s worth.

In The Crown Tower, much of the book focused on the developing relationship between Hadrian and Royce. Due to this, the start was kind of slow, and things didn’t really pick up until the second half of the novel. This did put off some readers, but tried-and-true fans of Sullivan knew to stick around because the good stuff was coming. In contrast, in The Rose and the Thorn, there is no lag where Hadrian and Royce hate each other. Their relationship has been established, so in that regard, it’s all good stuff. There is easy banter, the familiar quest-ish plot that readers will love, plenty of adventure, and some characters in Sullivan’s other series are introduced here. Readers will recognize them, and probably enjoy the book more for seeing how Hadrian and Royce met a few more recognizable figures.

That’s not to say that everything is peaches and cream between Hadrian and Royce, because it’s not. Their partnership is still new, and there are still growing pains throughout the book. Hadrian is still a little too naïve, but Royce is teaching him. And Royce is still an off-putting jerk at times, but Hadrian is teaching him. They both remain true to who they are, but their various growing pains are both humorous, and true to the partnership that is developing between them. I have to give Sullivan a tip of the hat for this, because I honestly expected him to introduce Hadrian and Royce in book one, and then book two would be a comfortable companionship that felt exactly like that in Riyria Revelations. It’s not. The Rose and the Thorn has just as much character and relationship development as the first book did; it’s just a bit subtler, a bit easier, and a little more exciting.

One point that readers might quibble with is the fact that, with all the new characters and perspectives, there isn’t as much of a focus on Hadrian and Royce, which is probably the reason most of us read the book in the first place. Some of these new perspectives are more exciting than others. They all give the story that is unfolding another layer of depth and perspective, but readers will inevitably like some more than others. However, one thing I always tend to enjoy with Sullivan’s books is that, no matter who the characters are, they all have flaws and strengths. They span the gamut of morality, and they make mistakes, which always impact the plot somehow. His characters, no matter who they are, are realistic in that way.

There’s a lot in The Rose and the Thorn, but Sullivan’s writing keeps it all easy to understand and keep straight. It’s a larger world, and a larger cast, but Sullivan never lets it get confusing or chaotic, and it never feels big for the sake of being big. No, Sullivan’s epic fantasy proves that not all epic fantasy needs a dictionary, notebook, and tons of time to read and understand. Perhaps some of the true beauty here is how Sullivan succeeds at both creating a world for new readers, but adding new depth to the world his tried-and-true fans already know and love, without ever seeming redundant.

As usual, the plot moves forward at a nice clip. Everything is paced perfectly, and Sullivan has already ironed out all of his writing flaws a few books ago, so it will be disgustingly easy for readers to pick up The Rose and the Thorn and lose a few days in the pages without even realizing it.

When I get to this point of my reviews I usually try to summarize my thoughts, but I don’t even know how to do that right now. Sullivan is an author whose books I pick up knowing I’ll love them. I recommend him to new readers all the time. He’s a classic fantasy author that fills some spot in me that craves something a bit more classic and comfortable, balanced with a shiny new edge. His books always cut right into me and no matter what points of his work I can pick on, it never, ever distracts from my absolute enjoyment.