The Republic of Thieves – Scott Lynch 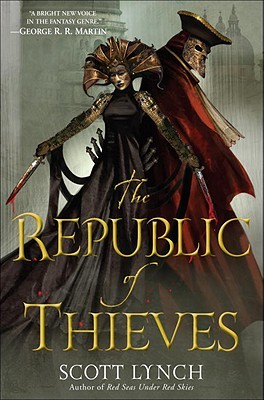 Having pulled off the greatest heist of their career, Locke and his trusted partner in thievery, Jean, have escaped with a tidy fortune. But Locke’s body is paying the price. Poisoned by an enemy from his past, he is slowly dying. And no physiker or alchemist can help him. Yet just as the end is near, a mysterious Bondsmagi offers Locke an opportunity that will either save him – or finish him off once and for all.

Magi political elections are imminent, and the factions are in need of a pawn. If Locke agrees to play the role, sorcery will be used to purge the venom from his body – though the process will be so excruciating he may well wish for death. Locke is opposed, but two factors cause his will to crumble: Jean’s imploring – and the Bondsmagi’s mention of a woman from Locke’s past . . . Sabetha. The love of his life. His equal in skill and wit. And now his greatest rival.

Locke was smitten with Sabetha from his first glimpse of her as a young fellow-orphan and thief-in-training. But after a tumultuous courtship, Sabetha broke away. Now they will reunite in yet another clash of wills. For faced with his one and only match in both love and trickery, Locke must choose whether to fight Sabetha – or to woo her. It is a decision on which both their lives may depend.

The problem with Scott Lynch is that he’s somehow managed to write one of the most anticipated, exciting books of the year. How in the hell is someone supposed to adequately review it? Impossible, I say.

The Republic of Thieves follows the standard Lynch format. Between each chapter, there is an interlude where Lynch revisits portions of Locke’s past. These interludes are, as always, important for developing the character and giving him some background and a hell of a lot of depth. Lynch does a mercy for the reader and fills in a lot of gaps in Locke’s past with these interludes. Things make sense and click into place.

One of the differences you might notice off the bat is the presence of Sabetha. The Republic of Thieves really focuses on Locke’s relationship with Sabetha. Readers are taken through its development, the trials of it, the growing pains, the heartache and then the current form of it. Lynch, however, does this in proper Lynch style. He keeps it interesting and refreshing rather than overbearing. The dynamics of the relationship are nothing short of fascinating, and it’s very interesting to see how it all plays out in contrast to the larger plot.

Each of the books in this series so far is different in some way. The way The Republic of Thieves is different is how focused on relationships Lynch seems to be. There’s the relationship between Sabetha and Locke, and the relationship between Jean and Locke and even Locke’s relationship to himself. Lynch really explores all of these in different ways. Some of them are more interesting than others, but they all work together nicely as parts of the whole and Lynch has a rather raw way of dealing with all these developments and what they mean to each character and the plot. He can emotionally grip a reader, and that’s part of his draw. You don’t realize it has happened until it’s happened.

Lynch seems to really push his humor further in The Republic of Thieves than I remember in the previous books. As things get darker and more hopeless looking, Lynch seems to get more and more hilarious, with some laugh-out-loud moments that you’ll truly enjoy. His balance between darkness and levity really gives this book a balanced feel that it might otherwise lack. Coupled with that is Lynch’s evocative prose.

The Republic of Thieves takes place somewhere new, and Lynch really expands his world. He adds the cultural nuances that I so love, and plenty of political drama to keep anyone on their toes. Coupled with Lynch’s prose, the world really comes to life. Readers get a sense of foreign and new, with the nice, familiar, and exciting Jean and Locke that they have grown to love in the previous two books of the series.

Though I appreciated the appearance of Sabetha, I’m not exactly sure why she is so mysterious and captivating to Locke. I mean, I get it, but it also kind of baffles me. (Here’s where you say, “That’s fantastic, Sarah. What the hell are you talking about?”) While it is rather fascinating to see their attraction and their relations (both the past and “current” forms of it) while they are enemies, some aspects of it were a bit too convenient. Yes, Sabetha is a great character but I do wish there had been a little more logic behind Locke’s attraction and desire. Maybe I’m saying all of this because I suck at romance. I don’t know. Read the book and be the judge.

The Republic of Thieves marches on at a good clip. It is a rather light book, probably due to the balance between the more serious tones and Lynch’s humor. My one complaint is that it felt like a placeholder. It is a bridge between the previous books in the series and whatever comes next, and it felt like that. The Republic of Thieves is pretty long, and incredibly entertaining and enlightening, as it fills in a lot of gaps that Lynch left readers with in the previous two books. Things happen and they are interesting and even captivating, but the end of the book is full of foreshadowing and a veritable fork in the plot road that makes me frustrated for numerous reasons.

This is anticipated to be a seven book series, and The Republic of Thieves is book three. That means that fans of the series are in for a long wait before it is over. Not a big deal, but the first three books basically follow the same formula, despite their different tones. I worry that if Lynch doesn’t shake things up and fairly soon, the series will get old and wind down long before he reaches the end of it. That would truly disappoint me, because out of all the authors out there, Lynch is probably one of the most unique. He has an absolutely captivating style of writing, and has somehow managed to make the exhausted thieves-and-hooded-men fantasy trope new and exciting for a gigantic range of readers. I really hope that this series doesn’t fizzle out before it reaches the end, and I think the primary way the author can combat that is by doing something unexpected and leaving his formula behind fairly soon.

Final thoughts? The Republic of Thieves is a lot of fun. The relationships that Lynch explores adds a lot of depth and interesting dynamics that previous books in the series might have lacked to some extent or another. Sabetha and Locke’s relationship was fascinating in a frustrating sort of way. The world building was spot on, and the balance of humor and darker moments and themes was absolutely perfect.

The Republic of Thieves: Everything fans of The Gentleman Bastards are waiting for, and a lot that they won’t expect.