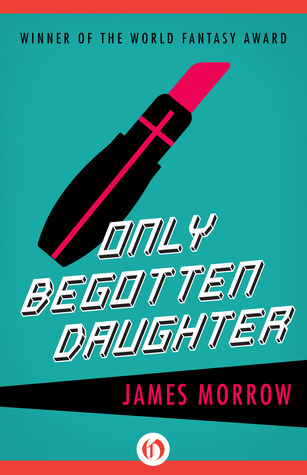 Call it a miracle or an accident at the sperm bank. But Julie Katz, the half-sister of Jesus, has been born to a celibate father. Soon poor Julie is tempted by the Devil and challenged by neo-Christian zealots-and that’s just the beginning of her fantastic odyssey through Hell, a seceded New Jersey, and her own confused soul. Winner of a 1991 World Fantasy Award.

There needs to be some sort of criminal charges against the genre each time an incredible book is published and flies below everyone’s radar. How many amazing books are out there that not nearly enough people have read just because they didn’t tap into the popular market vein when they were published? It’s wrong, people; so very wrong.

In terms of sacrilegious books that might offend readers goes, Only Begotten Daughter is probably near the top of the list, both due to content and quality. While this sacrilegious stuff doesn’t matter in the least to me, I can see how it would offend the sensibilities of individuals who are far more religious than little atheist me. Thus, a warning: If an exploration of religious themes and beliefs in a very non-religious way offends you, you’ll probably want to step clear of this one. Only Begotten Daughter boldly plays with many religious beliefs and practices in an unexpected way. While I loved it, it could easily rub people wrong.

Only Begotten Daughter is part urban fantasy, and part satire. Nothing is sacred, and Morrow explores that idea thoroughly, often shining a light on aspects of religion and belief that are often overlooked. Yes, it is uncomfortable (to some people) but that’s part of the beauty of it. Morrow isn’t afraid to make people uncomfortable, and in the process of doing that, he tells one hell of a fun, wild, adventurous story.

Morrow won the World Fantasy Award in 1991 for Only Begotten Daughter, but it seems like the book has largely been forgotten since then. The only reason I heard about it was because I saw it on Netgalley, thought the cover was weird/cool and requested it.  The thing is, even if the ideas that Morrow plays with offends you, if you can suspend that offense a bit and read the book, you’ll probably find yourself incredibly entertained. There is a lot of dry humor, and some laugh-out-loud moments here. The life and times of Julie, half-sister to Jesus Christ, is equal parts touching as she tries to find her place in the world, and humorous with some of the things she says and does.

At its heart, Only Begotten Daughter is an exploration of many of the outdated ideas of religion. Julie is the vehicle that Morrow uses to explore this. Morrow really strives to highlight Julie’s humanity, despite her divine heritage. Along with Julie is a full cast of secondary characters; some are more fleshed out than others. Julie’s father is a man I wish I had known more about. His solid, steady presence was juxtaposed nicely with Phoebe, who was erratic and unpredictable. Perhaps the one problem I saw with both of these characters was that while their presence is felt in the book, they never were three-dimensional enough for me to really care about them. Julie’s relationships with them are understood, but vague, which was unfortunate and Phoebe annoyed me.

Julie takes a voluntary trip to hell, where she meets her half-brother Jesus. This ended up being my favorite part of the book, as Julie learns a lot more about her divine heritage, and there are some truly somber, beautiful moments in her discussion with her half-brother that will exercise your thinkmeat. This section of the novel really highlighted how Morrow can write some laugh-out-loud prose, and can perfectly balance it with some somber, more humble and very thought-provoking text. Only Begotten Daughter really shows how versatile and unafraid Morrow is as an author, and I can’t help but appreciate him for that.

Some readers might take issue with pacing, and some scenes and experiences in Julie’s life can feel like they are dragging more than you’d probably like. However, in counterpoint to some of the pacing, the ending feels “right” for Only Begotten Daughter. Morrow takes the reader full circle, and will leave your head spinning with thoughts, whether you like those thoughts or not. This is one of those books that probes at those uncomfortable spots that people like to avoid. You’ll either love it or hate it because of that.

I loved this book. LOVED. IT. Then again, I’m one of those people who enjoys this sort of dark humor and a good poke at all things sacred. I can see how a vast swath of the population would find this book absolutely offensive, so be warned about that. Julie’s coming-of-age as the daughter of God is touching, frustrating, and funny. Her journey to hell is enlightening, and deliciously thought-provoking. The ending felt perfect for the book as a whole. Perhaps, however, the best thing I can say about it is that Morrow will leave you thinking, thinking, thinking. I finished this book weeks ago, and I will find it popping into my head daily at the oddest moments. That’s a true testament to the author’s skill. This isn’t a book you read. This is a book you absorb.