The Alchemist of Souls – Anne Lyle 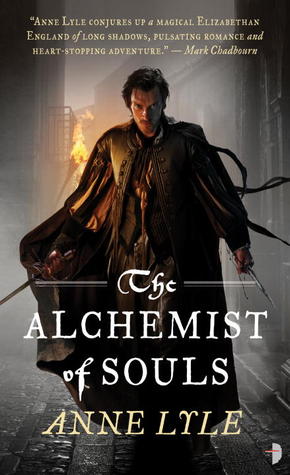 When Tudor explorers returned from the New World, they brought back a name out of half-forgotten Viking legend: skraylings. Red-sailed ships followed in the explorers’ wake, bringing Native American goods–and a skrayling ambassador–to London. But what do these seemingly magical beings really want in Elizabeth I’s capital?

Mal Catlyn, a down-at-heel swordsman, is seconded to the ambassador’s bodyguard, but assassination attempts are the least of his problems. What he learns about the skraylings and their unholy powers could cost England her new ally–and Mal his soul.

The Alchemist of Souls is an alternative history taking place in Elizabethan England, primarily London. I’m a sucker for alternative history, but Lyle knows how to do it right. She doesn’t add over-the-top elements that many alternative history books have in them. Instead, she twists the history just enough to make your mind wonder “what if.” For example, in Lyle’s England, the Virgin Queen (Elizabeth) ended up getting married and having children. Skraylings are creatures that are fairly magical and plenty foreign to peak anyone’s interest. Balanced with this is the rich history that really took place at that time, like the interest and importance in drama and the arts, the struggle for a woman to survive without her parents, the grim reality of sickness and easy death. It is all very well done. Unique enough to peak someone’s interest, well researched enough to be believable and educational.

There are three primary perspectives in The Alchemist of Souls, each of them with their own secrets and struggles that they fight against the restrictions of their day. Ned is gay at a time when being gay is a criminal offense. While Ned plays an important role in the plot, he seems to take a backseat to the stories of Mal and Coby. Ned adds a nice dash of color to what is happening, and his role is essential. Perhaps my one quibble with Ned’s character was how easy it was for other people to accept that he was gay in a time where that is such a no-no. However, in contrast, many of the people around Ned are also gay so perhaps that is why his sexuality seems like such a nonissue at a time where is should be a huge issue.

Mal and Coby are the character that will stick out to most readers. Both of these characters have huge secrets that they are hiding. Mal is protecting his mentally unstable twin brother, and Coby is pretending to be a boy when she’s really a girl. At the start of the book, their stories are separate. They don’t intersect and start entwining until later on. Their relationship is a natural one, and their absolute different positions in life and their different careers really gives the reader a unique and well rounded perspective of life in Elizabeth’s England. Coby and Ned shine some light on drama, the struggles of acting, and the behind-the-scenes life of actors, while Mal’s own personal secrets and drama, as well as his struggle with nobility and his position as a bodyguard are also illuminating in their own ways.

Some of the names of secondary characters, and the characters themselves, might feel a little interchangeable. Her focus is on her three main perspectives and the world building, so I found the secondary character confusion forgivable. These aren’t just some people thrown together for a ride. There are some definite individual plot threads that Lyle slowly and expertly weaves together (and it’s fascinating to see how it all works out). You become so invested and absorbed in those main characters that you won’t really care that the secondary characters are lack individuality. It’s all so expert, it’s easy to forgive these little details.

That is what Lyle does best in The Alchemist of Souls. She has a few important perspectives, and uses them to drive the plot forward, while illuminating her world and educating the reader at the same time. Having a few select perspectives and plenty of secondary characters really helps keep things real. It also allows Lyle to focus on nuances and subtlety (two things I very much appreciate in my fantasy), which in turn helps keep the reader’s eye on the target. A lot happens in The Alchemist of Souls, both in terms of the plot and personal growth, and Lyle’s absolute and obvious focus really allows you to just sit back and enjoy the ride. I never really felt that anything in the book was wasted, or had no point. Everything Lyle did served some important end, and that focus and drive really makes her shine as an author.

The Alchemist of Souls is a lot of fun, and while there is substance here, this book is more about the adventure and the experience than anything else, so sit back and enjoy the ride. You’ll be surprised by how emotionally invested you’ll end up being. It’s the first book in a series, and it’s where Lyle proves what she is capable of. Readers will become familiar with the world and cultures, but the real meat of it is with the Ned, Mal, and Coby, their struggles, their development, and the various adventures that transpire as the book progresses. It moves fast, and it pulls you in even faster. It’s one of those books that you’ll be just-one-more-chapter-ing all night.

Usually I take a break between books of a series, but I just couldn’t with this one. I finished The Alchemist of Souls and moved right onto The Merchant of Dreams. I actually read half of that one today and emailed the author begging her for an eARC of The Prince of Lies, so I can move right onto that one next. The thing about this series is that it’s absolutely addicting. You don’t realize you’re hooked until it’s too late to turn back. The Alchemist of Souls is tightly packed, full of adventure, and characters that have a shocking amount of depth. This book is your first hit. By the time you’ve made it through, it’ll be too late to turn around. You’ll be too invested.  You’ll be addicted.

Isn’t it great when that happens? You start a book expecting a bit of fun, and you end it feeling like someone just transformed your reality. Book hangover? Yes. I’m suffering from one.