The Merchant of Dreams – Anne Lyle 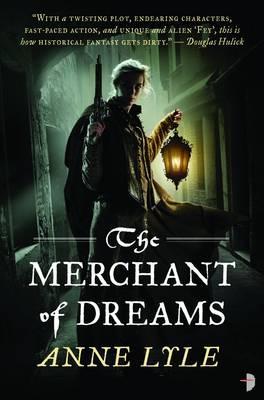 Book Two of the Night’s Masque series, sequel to The Alchemist of Souls

Exiled from the court of Queen Elizabeth for accusing a powerful nobleman of treason, swordsman-turned-spy Mal Catlyn has been living in France with his young valet Coby Hendricks for the past year.

But Mal harbours a darker secret: he and his twin brother share a soul that once belonged to a skrayling, one of the mystical creatures from the New World.

When Mal’s dream about a skrayling shipwreck in the Mediterranean proves reality, it sets him on a path to the beautiful, treacherous city of Venice – and a conflict of loyalties that will place him and his friends in greater danger than ever.

The Merchant of Dreams picks up a year after The Alchemist of Souls left off. Mal and Coby have been living in France, with Coby working as Mal’s male valet. Ned has been living with Gabriel. Sandy and Mal still have an interesting relationship. Life has moved on, and it’s a feeling that readers will recognize almost the moment the book starts. Things are different now, and that’s a wonderful thing that allows a lot of character and relationship growth as the book progresses.

One of the main differences that readers will notice right away is how evenhanded the flow of the plot is throughout the book. There are no drawn out scenes, or points where the author needs to catch up to the reader. No, Lyle has her plot and pacing mastered. Everything seems to take the exact amount of time that it needs to take, and it moves forward at the pace that it needs to move forward. While this wasn’t a huge issue in the first book, there were points where Alchemist seemed to take a little too long to get the point, and thankfully Lyle has dropped that habit in The Merchant of Dreams.

I often complain about the second book hump many authors run into. The problem is, especially with trilogies, that authors use the second book to be a sort of bridge between books one an three – a placeholder of sorts. Things always happen, but not enough happens to make the second book feel like a self contained novel that has a point all its own. Not with Lyle’s second book. No, The Merchant of Dreams has it’s own distinct point. The characters are all moving toward a very specific end. It’s actually quite refreshing to read a middle-of-a-trilogy book and feel like this book is strong enough to stand on its own. There is no bridge here. Lyle’s second book is its own delicious animal.

The world also expands. The time readers will spend in England will be brief and fleeting. While Coby and crew’s departure from England and the reasons behind it felt a little contrived, it did serve the purpose of bringing all of the main characters elsewhere. This allows Lyle to really flex her alternative history and world building muscles. She is up to the task. Venice blossoms under her care, and comes to vibrant life. The politics and the historical tidbits that the author drops in throughout Mal and Coby’s adventures really helps bring everything to life, and makes the city itself seem so three-dimensional to readers.

For my own reasons, I found the split of the groups at the start of the novel frustration. It’s a greedy reason, but I wanted to see more of Mal and Coby together, to see how they interact. However, that aside, there’s a reason for the group split. Lyle uses a lot of the character’s time apart to develop each character. We get a lot of introspective moments that would have been lost before. Mal has to figure out who he is and what his emotional position is in regards to Coby. Coby has to decide if she’s ready to step into the role of a woman like she needs to. Ned has to figure out his relationship with Mal and Gabriel, and Sandy is… well, confused in general. In truth, much of The Merchant of Dreams is about relationships to others and the character’s relationship with themselves, and accepting whatever they learn about themselves. It’s in interesting struggle that Lyle hands delicately, and subtly, and it is all the more powerful for that.

Aside from those delicious internal struggles I so love, Lyle has filled yet another book full of pulse pounding, politically detailed, battle filled scenes. Not only is there some good fist-on-fist action, but there’s also the added benefit of pirates and sea battles. Lyle really upped her bar for action, and it’s nice. While some of it might seem a little contrived to move the plot in a certain direction, it is a lot of fun, and very well researched. Not only that, but with Mal’s dream training adds another angle of intrigue that really upped the emotional tension in the book.

Some readers might be put off by some of the decisions a few of the characters make throughout the book, and the split of the group will also likely frustrate a few, but when everyone is reunited, that separation and the various bad choices some characters made really pays off. There’s a definite very natural tension that fills everyone for very different reasons. I had the distinct feeling of watching something private I shouldn’t be watching throughout much of the last of the book. That really is a testament to Lyle’s writing ability. Everything she writes is so absolutely real. While some parts of this might seem a little contrived, the characters are just burned into the reader’s psyche, and the world they inhabit becomes just as real as our own. You can’t help but feeling like you’re spying on real people, and real struggles. It’s amazing.

The Merchant of Dreams ends on a bittersweet note. Some plot threads are nicely tied off, and others are left hanging to be completed in The Prince of Lies. All of the characters suffer from some sort of loss, and all of them are trying to write some wrongs. Some characters lose more than others, but all of it is heartfelt and natural. I loved the ending probably more than I love most endings just because it felt so true to the book as a whole. There were ups and downs for everyone, and Lyle reflects that with an ending that has ups and downs for everyone.

If you can’t tell, The Merchant of Dreams was a really fun book with a fast moving plot and plenty of action, but it was the emotional threads and inner growth and development that really did it for me. It’s the characters, and how amazingly, vibrantly alive they are that really sticks out. Love ’em or hate ’em, you can’t help but feel for them. Lyle has this uncanny ability to balance her books surface level plot and action with a lot of deeper, more subtle and profound threads. She shows how alternative history should be written. Every time I finish one of her books, I feel like I’m saying goodbye to a friend.