Beyond the Tempest Gate – Jeff Suwak 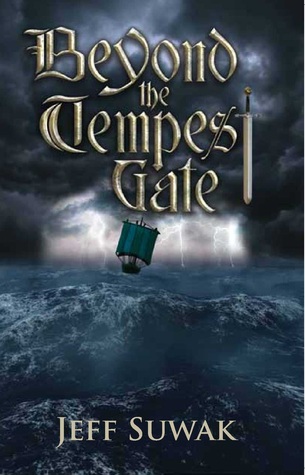 From the time he was a young boy, Gabriel Aterias knew he was destined to rise from the peasantry and become the Holy Knight of the Church of Dunrabian. By the time he was twenty four years old, he had already led the Church’s armies to greater victories than any other man in history. Yet, his greatest feat still lay ahead of him.

Beyond the elemental barrier of the Tempest Gate lurks the demon Elezear. An evil older than the world itself, it nearly eradicated the human race once before. For five hundred years, the people of the Five Kingdoms have slept uneasily, praying that the creature would not escape the walls of storm that confined it.

Gabriel vows to destroy the demon. His quest will take him far beyond the borders of civilization, across the ocean, and into unimaginable darkness. What he will soon discover is that the greatest danger in his quest to save the world may very well be the loss of his own soul.

This book was sent for me to review.

Here’s a secret: I don’t like novellas. In fact, I try really hard to never read them. It’s not because they suck. In general I tend to enjoy them. It’s because the damn things aren’t long enough. I like my books to be meaty and big enough to break down my front door when the UPS guy comes to the house (again). Novellas…. They just don’t do that. They are light and fluffy. They don’t break down my door, but just barely manage to stir up a gentle breeze in the air when they fly past my head. The thing is, I like to really get into the books I read. By the time I get into a novella (or short story), it’s already over. Then you have an angry bookworm because she wants more and there isn’t any. It’s bad, I tell you. Not just bad, but tragic.

Then, occasionally, someone will contact me about a novella and I’ll break my rules and read it. Such is the case for Beyond the Tempest Gate.

Beyond the Tempest Gate is roughly 70 pages long, which isn’t that long. You can probably read the whole thing in a few hours. The difference between this novella and so many others is that Suwak isn’t just telling a story; he’s playing with some really interesting themes. This could have easily turned into a novel, but Suwak manages to pack a powerful punch with his method of grabbing the story by the horns and really pulling the reader along with him as he wrestles it to its conclusion.

On the surface, and at the start, this might seem like so many other epic fantasy stories told about a young man with large dreams and a prophecy that very much follows the standard hero’s journey. And on the surface it is exactly that (and that will probably frustrate some readers, regardless of how tantalizing the deeper themes are). The main ideas aren’t really that new. It’s the subtleties and the underlying tones that are what is new. You see, Gabriel isn’t just a young man thrust into a role the prophecy has given him; he’s a young man who read about a prophecy and decided he was going to fulfill it. There’s a huge difference there, and that is also where Suwak really hooked me.

If you are any great follower of this website, you’ll know that I enjoy my books with a fun plot and full of deeper, more ponderous themes, and that’s exactly what you get here. What makes it all even more incredible is how Suwak manages to play with these weighty themes despite the short length. Bravo, sir. At the heart, Suwak really plays with identity. Gabriel thrusts himself into a role, and will stop at nothing to achieve it. In all reality, it wasn’t a mandatory decision. He didn’t need to take the prophecy onto his shoulders, but he had dreams of being a hero and so he did it. That choice became his identity. So how much of who we are is a result of the decisions we make, and the actions we take? That might not sound like much, but it is rather fascinating, especially with Suwak’s unique vision.

In truth, I’m almost afraid to say my interpretation of the plot (like I just did) because I could be totally wrong. I am a huge sucker for novels like that – where you interpret it one way fully knowing that everyone else who reads it might interpret it many other ways.

Another bright spot of Beyond the Tempest Gate is Suwak’s prose. His writing is descriptive, and just boarders on the too-much-description line occasionally, while never really crossing over it. The fact of the matter is, he makes his world come to live, and infuses the struggle of his characters with emotions that will scar the readers. Perhaps the only drawback was that some of the characters felt a little too typecast, and I longed for them to be a little more unpredictable and surprising. That being said, I’m not really sure how picky I can be because this is a novella, not a novel. Suwak didn’t have as much time to create epic characters, as he would have if he had written a novel. However, his writing, his ability to bring the world to life and raise uncomfortable questions in the reader in such a short amount of time really says something for the author. He has some very real potential, and I cannot wait to see what he can create with a full-length novel and some nice wiggle room.