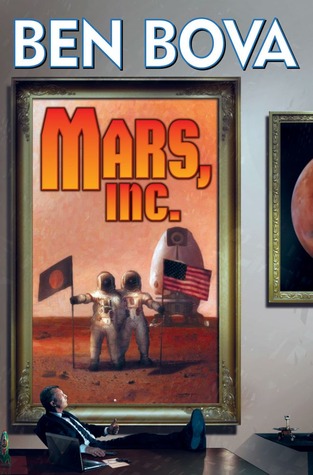 How do you get to the Red Planet? Not via a benighted government program trapped in red tape and bound by budget constrictions, that’s for sure. No, what it will take is a helping of adventure, science, corporate powerplays, a generous dollop of seduction—both in and out of the boardroom—and money, money, money!

Art Thrasher knows this. He is a man with a driving vision: send humans to Mars. The government has utterly failed, but Thrasher has got the plan to accomplish such a feat: form a “club” or billionaires to chip in one billion a year until the dream is accomplished. But these are men and women who are tough cookies, addicted to a profitable bottom-line, and disdainful of pie-in-the-sky dreamers who want to use their cash to make somebody else’s dreams come true.

But Thrasher is different from the other dreamers in an important regard: he’s a billionaire himself, and the president of a successful company. But it’s going to take all his wiles as a captain of industry and master manipulator of business and capital to overcome setbacks and sabotage—and get a rocket full of scientist, engineers, visionaries, and dreamers on their way to the Red Planet.

The man for the job has arrived. Art Thrasher is prepared to do whatever it takes to humans on Mars—or die trying!

Mars, Inc. is the first Ben Bova novel I’ve read, which is kind of ridiculous when you consider how prominent his name is in the industry. I’m not saying that for any other reason than to say that many readers might compare this book to some of Bova’s others, but I can’t because I haven’t read any. Take that for what it is worth.

Mars, Inc. is an interesting exploration of how to get to Mars, not by using NASA or the government, but by basically privatizing the space industry and using big business, investors, and the like to get out there. While you might expect some trips into space in this book, the fact is that most of the novel takes place right on solid ground, watching Art Thrasher gather his investors, head hunt for scientists and the like, and test out his program.

That’s really where both the strength and the weakness of the novel lies. The fact is, when most people pick up a SciFi book, they want something to do with space, or futuristic technology or something. There’s very little of that in Mars, Inc. Instead, the world is very much like our own. In fact, it is so similar to ours that these happenings could be taking place today, right now. Mars, Inc. is more about speculation regarding the space industry and how it might change rather than far-flung universes and science fiction tropes. That will probably disappoint a lot of readers who are looking for something a bit more futuristic or more speculative fiction feeling.

The other thing that might disappoint some readers is that there isn’t really a “bad guy” in the book. Sure, there are stepping stones and roadblocks for what Art Thrasher accomplishes. Some bad things happen, and there’s some suspense as you wonder how it will all work out, but there really isn’t an arch nemesis other than the “goddamned government.” While I tend to enjoy more gray area characters and the lack of having anyone to root against doesn’t really bother me, it probably will bother some readers.

Art Thrasher himself is an interesting character in the fact that he pretty much represents big business. His aim is to get to mars, and the virtual programs that he will sell based off the mission will make him incredibly wealthy. Usually I root against big business in a book, and Thrasher is the epitome of that ideal, but I couldn’t root against him here. He’s a big business man with a plan and it’s kind of fascinating to see how he makes it all work, from the gestation of his idea, to when the idea is put into action. Furthermore, seeing a book unfold from the perspective of someone that is far too easy to hate in literature was an interesting mental exercise for me. Art’s viewpoint, and how he managed to accomplish what he accomplishes in Mars, Inc. really made me think about the space industry, and science in general, in a whole new light.

It isn’t all cupcakes though. Bova does a fantastic job at showing both the negative and positive aspects of business in bed with science. Some of the overarching aims of Thrasher’s company and their Mars mission are so for-profit they kind of make me sick. That’s the point, though. Bova is showing readers how business could positively impact space exploration, while realistically showing us how their impacts would all have to be for some sort of personal gain. It is about Mars, but the board has to have a cut, so a huge focus also has to be on how Mars is going to make Thrasher and his company money. It’s pretty interesting and the ideas Bova presents readers are laid out really well.

Art Thrasher is the main character in Mars, Inc. He shines far brighter than anyone else. The secondary characters are there purely to prop him up. While some are more memorable than others, they all seem rather pastel in comparison to Thrasher. That’s not saying that Thrasher is the character of all characters, though. In fact, Thrasher seems like less of a person and more of a symbol of business than anything else. I never really felt like I got to know him outside of his role in his company. There are tidbits thrown around, things that make him look more like a person than a business man, but they never really stick, and that is probably where the novel seemed weakest to me – the characterization. None of these characters really felt like they had a life of their own. They were all there to prop up the ideas that Bova is presenting to the reader, which is unfortunate.

The novel itself has a sort of odd feel to the pacing. Some of it goes really fast, and some of it drags on and on. Like I said above, this is all about business, and some of the wheeling and dealing, the meetings and negotiations are fun to read about, but until things are moving forward on the project, it can start feeling like you are basically reading the same thing over and over again. Art flies somewhere, talks to someone, says some quippy things, they shake hands and he leaves feeling satisfied. However, when things on the Mars project start moving, the book gets pretty interesting. Readers who are more into business and how it all works will probably enjoy the wheeling and dealing more than I did. I’ve never had a head for that stuff, so I think my issues with pacing might be a reflection of my own personality than Bova’s writing.

So should you read Mars, Inc.? Sure. While this might not be SciFi enough for some readers, the ideas that Bova plays with and presents to readers are pretty priceless. Mars, Inc. left me thinking about our space industry and wondering what the future holds for it. I think that is probably the point of the novel. Bova wasn’t writing some huge manifesto regarding space exploration, nor was he trying to write the next SciFi masterwork. I think he was taking our space industry and looking at it from a different perspective to try to get readers to do the same thing. It’s kind of clunky, kind of weirdly paced, and I think the characterization leaves a little to be desired, but the guarantee is that it will make you look at things a little differently. Agree or disagree, sometimes a different perspective is refreshing and exciting.