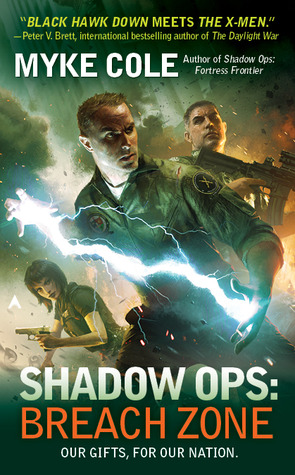 Honestly, I have put off writing this “review” quite a few times. I don’t know how to go about doing it. Myke Cole is one of those rare authors who has sort of flourished at the same time as my reviewing started to take wing. It’s been a pretty cool journey for him, and it’s been really neat for me, as a reviewer, to sit back and watch this very promising, very determined and dedicated author, really take off and do what he does best.

Breach Zone is the final book in Myke Cole’s Shadow Ops trilogy, and what a final book it is. All you really need to know about it is that this is one hell of an ending to a very powerful, very fun, and very thoughtful series of books. It is, by far and away, the best book of the series. Cole knows how to end things perfectly. He ties together all the threads, ends everything with a neat (and surprising) flourish and manages to leave readers satisfied. He took us on an adventure, and it is always sad to see these really fun, high-octane adventures end.

And there’s the problem I keep running into when I try to write this review. I’ve said it all in one paragraph. This is one of those books that is good. It’s just good, plain and simple. It works on a lot of levels and it leaves me… speechless, really. But I try very hard to make my reviews much longer than this, so I can’t end it here.

I always kind of get nostalgic when a series ends. I go on a journey with these characters. I spend countless hours and days in their worlds, and I think about them for years after I finish the books. The stories and lives I read about and experience become part of me, and it’s hard to say goodbye to that. Maybe I just put too much of myself in what I read, but that’s how I feel. That’s also why I absolutely hate ending a series that I love, and I usually refuse to unless a publisher sends me the last book in that series and wants me to review it (like with Breach Zone). I just don’t want it to end. I don’t want to close the book that part of myself I discovered in those pages.

But it is more than that, in all honesty. With Shadow Ops, my blog grew alongside of Myke Cole as an author, and it’s been a rather interesting experience all around. While I’m not even close to as popular as he is (ha…. My corner of the internet is dusty and largely abandoned), I learned a lot of how to read books as a critic while he honed his writing talent. As time passed, I became a much less forgiving reader. Why this matters to my “review/rant” is because military books really aren’t my bag and never have been. I kind of turn off when large military and tactical books are put before me. So, when I accepted the author’s offer to review his first book, it was with a sort of dread. I wanted to try something new, but I knew it was a military SpecFic book, and because of the “military” in the title, I figured I’d probably hate it and I’d have to hate it nicely.

Well, that didn’t happen. I ended up loving Control Point, despite myself. I liked Fortress Frontier even more, and Breach Zone kicked the ball out of the park. So, while my reading became more critical, Myke Cole’s writing kept getting better. I never ended up hating his books the way I expected to. In fact, he showed me that it is worth giving something a-typical a shot, because you might just learn that you like it. Myke Cole’s books are the entire reason I challenge myself to read an area of the genre I typically don’t expose myself to each year. He got me to try something new. He showed me that you might not feel the way you think you’ll feel about whatever you have assumptions about – so I decided to broaden my reading horizons, and it has been so much fun.

No, this isn’t a review, this is mostly about me waxing nostalgic about Shadow Ops, what a fantastic series it is, how amazingly fun it has been to see Myke Cole grow and develop as an author, and how he stayed ahead of my critical curve with each and every book. Breach Zone is the ending of a fantastic series that taught me to never let my own preconceived notions stand in the way of a good book. Cole proved that trying something new can be so amazingly rewarding. It’s hard to say goodbye to his fantastic series, but I trust that potential readers will come across this post and decide to give it a try. You won’t regret it, and through you’re enjoyment of it, I’ll get to relive a bit of it myself. It’s a win-win all around.

And to Myke Cole, thank you for one hell of a series. I am so excited to see what you publish next.

Shadow Ops is just the first wave from an author who has the potential to create a genre tsunami.