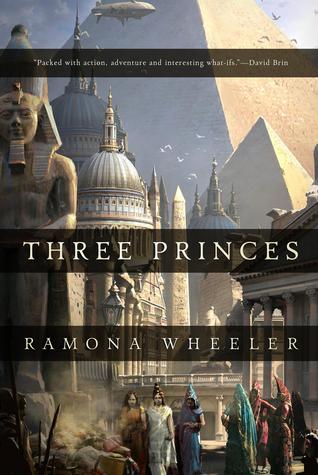 Lord Scott Oken, a prince of Albion, and Professor-Prince Mikel Mabruke live in a world where the sun never set on the Egyptian Empire. In the year 1877 of Our Lord Julius Caesar, Pharaoh Djoser-George governs a sprawling realm that spans Europe, Africa, and much of Asia. When the European terrorist Otto von Bismarck touches off an international conspiracy, Scott and Mik are charged with exposing the plot against the Empire.

Their adventure takes them from the sands of Memphis to a lush New World, home of the Incan Tawantinsuyu, a rival empire across the glittering Atlantic Ocean. Encompassing Quetzal airships, operas, blood sacrifice and high diplomacy, Three Princes is a richly imagined, cinematic vision of a modern Egyptian Empire.

Alright, folks. You’re getting a not-a-review today. Why? Because this is a book I just couldn’t finish, no matter how hard I tried.

Three Princes is a novel I have been looking forward to for a while now. The cover art is gorgeous, and I’m a huge sucker for alternative histories. An alternative history featuring the Egyptian Empire? Yes, please.

All you really have to do is read the back cover blurb to see why this book would hook me so easily. There’s a lot here for a person to enjoy. There’s some fascinating world building, an interesting premise, and the promise of a very broad, international scope. All things point to wonderful.

My excitement was curbed pretty fast.

Our protagonist, Lord Scott Oken, is right out of some spy-flick from a bygone era. He’s always in the right place at the right time. Somehow he can do everything. He has quick fixes and can screw anything that moves because he’s just that amazing. Protagonists like that are a lot of fun if they are done right, but the problem with Oken is that he’s very one-dimensional. In fact, he felt like so many other characters I have read before.

And that’s really the problem with the whole novel (at least the parts of it I read). It felt very done-before. While that’s not always a bad thing, the borrowed feeling of this book – take a villain from here, a protagonist from there, a plot twist from another place, some pretty cheesy naming conventions, and mix well – lacked a level of depth and creativity that was needed to really hook me.

The synopsis is loud and promises amazing things, and execution doesn’t live up to it. That’s probably the biggest disappointment. People will go into this book expecting so much, and it doesn’t take long for it to just fall flat.

That’s unfortunate, but it’s the truth. I hate writing not-a-reviews like this. I truly do. I realize that the author spends a lot of time writing their book and then I poo-poo it like this. It’s gotta hurt, but I have to be honest with my readers. This book had such potential, and it just didn’t live up to it. When I get sent so many books in the mail each week, I start to realize that life is too short to spend too much times on books that you don’t enjoy, so I moved on. Perhaps this book will work for other people. In fact, I can guarantee it will. It’s worth giving it a try. However, it just didn’t work for me.