My Invitation Was Accepted (AKA: The Epic SQUEE)

I have an open invitation to authors: If you people ever travel through this area where I live, I want to meet you and I will take you out to lunch/dinner. I never really expected anyone to take me up on it, but I guess if you bother someone often enough, they finally relent and take pity on this bookworm’s soul.

Such was last night, with Peter Orullian.

Peter comes in town each year for a small conference called LTUE. I haven’t ever been able to go before, because I’ve been way too sick for years to do anything. This year is the first year I’m not too sick to get involved in stuff like that, to think outside of my sphere of existence, and really engage in the genre I love so much. So I bothered our friend Peter until he decided to meet me for dinner, which happened last night between a panel he was on, and the mass autograph session.

We met at the hotel and ate at the restaurant there (which served surprisingly good food) and talked for long enough to make him late to the autograph session (oops). Probably a little over an hour. The sad thing is, I think I could have talked to him for a lot longer than that because he is genuinely fascinating, and it is absolutely wonderful to talk to someone who is in the genre like that, about things from his point of view.

And talk about things, we did. We discussed a lot of different aspects of the SFF community, like websites, and the qualities of the websites we frequently visit that we like so much. I asked him about PR and how that whole thing works through Tor, how he thinks his PR went with the release of The Unremembered. I talked to him a bit about the factors that have delayed the release of his second book. We talked about the magic system and he hinted at some AMAZING things happening in book two that I CANNOT WAIT TO READ. He also talked about how the gap between book one and book two has made him really approach the writing of book two differently. He told me about a friend of his who is writing an urban fantasy series that sounds absolutely amazing and I really, really want to read it (but I forgot to ask what it was called).

Then L.E. Modesitt Jr. came walking through the restaurant and Peter said, “Hang on, let me introduce you to L.E.” At which point I just about passed out. So Peter called him to our table and I think I might have had some minor heart attacks in quick succession. we shook hands. Peter introduced me as “Sarah, who runs Bookworm Blues, the best genre blog around” (cue minor palpitations). L.E. Modesitt Jr. handed me this book with all of his books in it (and wow, has that guy written some books) and I later got him to sign it for me. 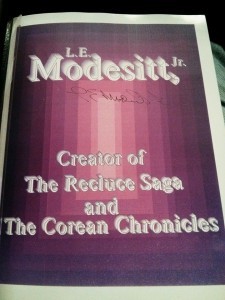 It was a totally surreal night, and I’m absolutely floored that I got to talk to him on a one-on-one level like that.

1. A few things I learned, Peter Orullian is genuinely one of the nicest guys I’ve ever met.
2. His series is going places, and I really want to read the next book (which is estimated to be released in a year, so brace yourselves).
3. I really feel like I could have talked to him for hours, because the hour I did have with him flew by. 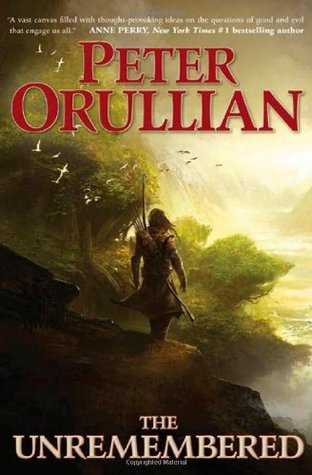 The last point really drives home a lot of what I’ve been thinking about recently, in regards to the genre community, my website, and my place in it. I do this for fun. I run this website because I love reading, and I want everyone else to love reading and get excited about books, too. It was wonderful to talk to someone who felt the same way about the genre as I do. You know what this whole conversation really made me understand? That the love of this vibrant, beautiful community is a powerful thing, and when people embrace that enthusiasm, and come together in it, amazing things can happen.

Here I was, sitting across a table from an author that has fascinated me for years, talking about various aspects of being a writer, like I belonged there or something. I say it online a lot, but our similarities are far more numerous than our differences, and last night proved it. The two of us live in different states, with different experiences, and different perspectives (one of us being in the industry and the other – me – just yapping over here on the sidelines) but that enthusiasm bound us together and last night was an absolute joy for it. I learned a lot, and I smiled and laughed a lot. He’s a very nice guy, but more than that, he solidified my desire to try and be a positive force in this community I love so much, because there is so damn much to be positive about.

So thanks to Peter Orullian for such an incredible night. I personally would have loved to talk longer because it seems like there is so much that we could easily talk about, but all things must end. Luckily for those of us in this fair state, I think he’s going to come back for a few other conferences this year, he was talking about possibly coming Westercon, and Salt Lake Comic Con. I have promised him that the next time he is in town, we will have to meet up for another meal.

Officially? Having dinner with a well known author can get crossed off my bucket list. I’m hoping that is just the first of many, as our conversation really gave me some fascinating, unique insights into this community, from an author’s perspective, that I haven’t ever had before. It illuminated a lot of the strengths of our community, and some of the problems we face as well. Very, very cool… and very neat to be able to see things from an author’s perspective. Invaluable, really.

Big thanks to Peter Orullian for such an incredible evening. You just made this crazy bookworm’s life. 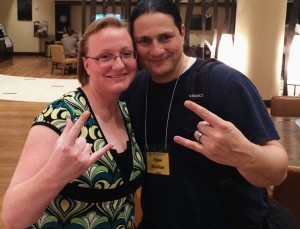