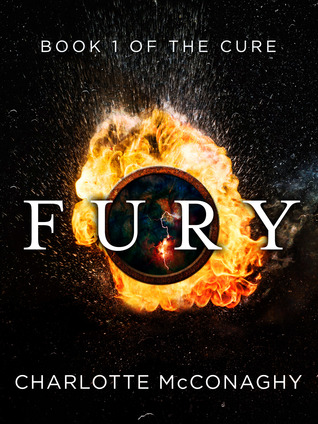 When emotions are erased from the world, creating a civilization of mindless drones, only those with fury can survive.

On the same day each year Josephine Luquet wakes naked, shivering and covered in blood that is not her own. Under the cold gaze of the blood moon she is someone else entirely, but when dawn breaks her memories flee and she is left with only an icy horror, a burning fury. Amid a sea of drones, she alone hasn’t been cured.

It will be the same each year: atrocities forgotten, truths hidden and pieces of herself left to die.

He isn’t like the other drones. With secrets whispering behind his eyes and a hunger for all things Josephine, he is the only one determined to help her discover the truth before the next blood moon rises.

But time is running out. Is Luke willing to risk his life to be near her? Does he truly understand what violence she is capable of?

Raw and full of passion, Fury is a story of love in a dystopian world, and how much we are willing to forgive in the struggle to remember our humanity.

One of the best things about reviewing books is taking a chance on something new, something I’ve never heard of before, and having a huge, satisfying payoff from that chance. The thing is, with all the books that fly in my house each week, it is impossible not to take those chances, and I am so glad. My literary horizons are always expanding and changing depending, and it is such a treat.

Fury is a book I took an absolute chance on. I’m not big on dystopian-feeling novels, and I’m kind of sick of the dog-eat-dog-look-at-how-far-we’ve-fallen stories. From the back cover blurb, Fury seemed to be everything I really don’t like right now. So why did I take a chance on it? Sometimes an idea is so powerful that it haunts me. The idea of society having emotions removed reminded me a bit of Divergent (in some mild ways) but with a more adult feel, and more focused on that one aspect of our human experience. I was captivated. I wanted to know more.

McConaghy is an Australian author who, quite honestly, I’ve never heard of before I read this book. She writes the kind of books that I typically don’t pay much attention to – urban fantasy and fantasy with a hard romantic edge. Due to the fact that we tend to fly past each other in the genres we prefer to read and write, it’s no small wonder I haven’t really heard her name before.  However, she’s written quite a few books. Fury is just the start of a new series (The Cure) that she is working on. This isn’t some untested author, she’s tried and true, and her prose proves it.

Fury is set in a dystopian world, somewhere in the near future, where the main issue facing humanity has been pinpointed as the emotion of anger, and steps had been taken to rid humanity of this emotion through the “cure.” The idea this novel is based on is very well thought out, and incredibly unique. McConaghy takes steps to show just how emotion, and the lack of it, can have long lasting, and far reaching impacts. It is interesting to see just how humanity changes when one emotion is taken away from the spectrum. People don’t just stop feeling anger, but their reactions to situations is vastly different than what we’d expect, due to that lack of an emotion.

Into this mix is a small group of hidden individuals who haven’t been cured, and secret police forces who search these people out. Our protagonist, Josephine, has an interesting situation that kind of throws a cog into the wheel of how this futuristic society runs. There is a mystery where she is trying to find out the reason for her situation, while she also tries to stay one step ahead of the people who are trying to find her and “cure” her. Her life is hard, and her jaded, almost bitter voice is a testament to that. Nothing comes easy for her, and her plight is incredibly real. It is easy for readers to sympathize for her, and her plight.

The perspectives change, though they stay with a primary few. They all, for the most part, have unique voices so readers won’t suffer from confusion. There’s some romance, which is really well done and seems to add to the plot rather than distract from it. Fury starts with Josephine getting questioned by a psychologist, which is a type of storytelling that either works or absolutely fails. It was rather brave for McConaghy to tell the story this way, as it deals with timeline issues, which can be confusing, and it also seems to make the plot more complex than it really needs to be. However, the author, for the most part, pulls it off. While I’d usually say that this way of telling the story would make things more complex than they needed to be, in Fury, the book ended up being much more complex than I expected, and this way of telling the story actually kept up with the plot nicely.

There are some books that hook me for the prose alone, and others that hook me for the characters. Then there are the few books that absolutely hook me because the premise the book is based on is so absolutely thought provoking. This is one of the ladder kinds. Fury surprised me. I went into it expecting an adult version of Divergent, and I came out of it absolutely surprised (but the good kind). This book is thought provoking, and well written. The ending is a little predictable, but the pace is breakneck, and the plot is absolutely absorbing. Josephine is a character that keeps you guessing, and McConaghy’s writing is tight, and filled with just the right amount of description.

Fury is the first book in a trilogy, and I cannot wait to read more of it. It’s a fast, fun story, but also an absolutely fascinating look at the raw power of emotions.