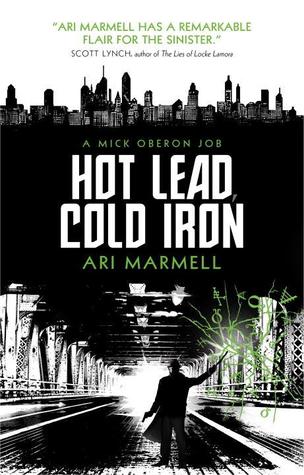 Hot Lead, Cold Iron is the first novel in a brand-new fantasy detective series that will appeal to fans of Rivers of London and The Dresden Files

Chicago, 1932. Mick Oberon may look like just another private detective, but beneath the fedora and the overcoat, he’s got pointy ears and he’s packing a wand.

Oberon’s used to solving supernatural crimes, but the latest one’s extra weird. A mobster’s daughter was kidnapped sixteen years ago, replaced with a changeling, and Mick’s been hired to find the real child. The trail’s gone cold, but what there is leads Sideways, to the world of the Fae, where the Seelie Court rules. And Mick’s not really welcome in the Seelie Court any more. He’ll have to wade through Fae politics and mob power struggles to find the kidnapper – and of course it’s the last person he expected.

There are some authors who perpetually don’t get the attention they deserve. They pump out quality, incredibly enjoyable books on a regular schedule, and the have plenty of fans, but they never seem to hit the spotlight like I think they should. Ari Marmell is one of those authors. His books tend to make a buzz, and they are always amazing, but he never quite gets the attention that he deserves.

Hot Lead, Cold Iron is a new sort of book for Marmell. It’s urban fantasy, set in our world, and involves the fae. That’s totally new for Marmell. He’s known for fantasy, and his recent successful books, the Widdershins series, which is young adult and secondary world fantasy.

Hot Lead, Cold Iron reminded me a little bit of Ian Tregillis’s new book, Something More Than Night, in the fact that the protagonist is older than old, but stuck in a fairly young body, and lives in the 1930’s and talks like it. In fact, the reality of the world that Marmell has created, Chicago in the 1930’s feels more real than real. People talk the way that you’d expect a rough-and-tough detective in the ‘30’s to talk, and Marmell has woven in all the details that make up the period and the city seamlessly. It’s just about as fun to read about the city and the setting as it is to read about Mick Oberon himself.

Mick Oberon himself is the kind of protagonist that I love to read about. He’s a lot of fun. He’s old and jaded and the kind of “get off my lawn you crazy kids” cranky that makes me laugh. The things that make him happy are simple, a warm glass of milk, and some time alone. He does jobs for trinkets, whatever strikes his fancy, and places almost no value on money. In fact, when he needs to start earning money, he feels rather out of his depth, which I found endearing. He talks tough, and walks tough, and can find himself a way in and out of situations easily, but all of that is really covering this inner softie that breaks through occasionally.

The plot is fast paced. Hot Lead, Cold Iron starts out with a knock-em-down-rumble and it really doesn’t let up after that. Being a Chicago PI, you can expect a mystery and you get one. Not only the mystery of finding who Oberon is trying to find, but the mystery of Oberon’s past, which slowly unravels as the book unfolds. That being said, there is plenty left a mystery to keep readers wanting to know more, and anxious to do so in further installments of the series.

The magic is sort of subtle, and a nice touch without being overpowering. It adds to, causing a wonderful effect to certain plot points. It is believable and unique. It kept me wondering and made me really appreciate the finesse that Marmell used when he crafted this world of his. Furthermore, that can be said for the fae elements in general. They are rather subtle, rather understated element that made me appreciate their otherness even more.

In fact, much of the novel is like that, and that’s what surprised me, and what I enjoyed about Hot Lead, Cold Iron the most. It’s kind of flashy, kind of in your face, with a wham-bam plot that will hook you, but there are a lot of subtle tones here that readers will really appreciate.

In terms of the plot, there isn’t a whole lot involved in the mystery/adventure that will shock the hell out of many readers. It’s kind of predictable in a lot of ways, but that isn’t really a bad thing. There are enough subtle and surprising elements involved in the world to enchant readers, and Oberon is an absolutely delightful protagonist.

Hot Lead, Cold Iron is the first book in a brand new series by Ari Marmell, and it really shows his strengths. He has an uncanny way of paring opposing elements – a strong, fast, bold and slightly predictable plot, with stunningly subtle and incredibly well crafted world building elements. Mick Oberon is a delight and by the time the book was over, I felt like I made a hilariously grumpy friend. It’s a lot of fun, and Marmell is an author I really want to hit it big. He deserves it, and this book shows a lot of his strengths.