Veil of the Deserters – Jeff Salyards 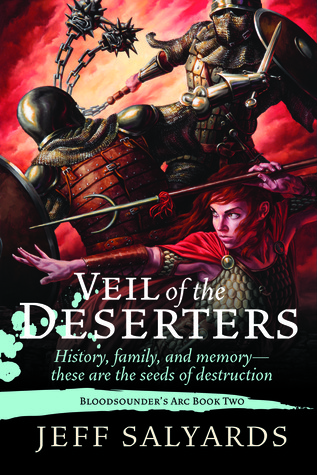 History, Family and Memory… these are the seeds of destruction.

Bloodsounder’s Arc continues as Captain Braylar Killcoin and his retinue continue to sow chaos amongst the political elite of Alespell. Braylar is still poisoned by the memories of those slain by his unholy flail Bloodsounder, and attempts to counter this sickness have proven ineffectual.

The Syldoonian Emperor Cynead has solidified his power base in unprecedented ways, and demands loyalty from all operatives. Braylar and company are recalled to the capital to swear fealty. Braylar must decide if he can trust his sister, Soffjian, with the secret that is killing him. She has powerful memory magics that might be able to save him from Bloodsounder’s effects, but she has political allegiances that are not his own. Arki and others in the company try to get Soffjian and Braylar to trust one another, but politics in the capital prove to be far more complicated and dangerous than even Killcoin could predict.

Deposed emperor Thumarr plots to remove the repressive Cynead, and Braylar and his sister Soffjian lie at the heart of his plans. The distance between “favored shadow agent of the emperor” and “exiled traitor” is an unsurprisingly short road. But it is a road filled with blind twists and unexpected turns. Before the journey is over, Arki will chronicle the true intentions of Emperor Cynead and Soffjian. And old enemies in Alespell may prove to be surprising allies in a conflict no one could have foreseen.

While many reviewers waxed philosophical about the Night Shade debacle, I really spent all of my time over here worrying about how some of my new favorite authors would fare. Would they be sucked into bankruptcy hell, or would they somehow tread the waters and find a better time to make a go of it? I’m beyond pleased that most, if not all, of the authors I was worried about have moved on to bigger and better things – releasing books, writing books, doing their authorial thang.

What really got me about the Night Shade things was how many new authors, people that I had just been introduced to, were in such precarious situations. While the blogosphere was pontificating on the finer points of publishing business, I was worrying about Stina Leicht, Zachary Jernigan, and Jeff Salyards.

Salyards released his first book, Scourge of the Betrayer, hit the SpecFic community with a splash that, quite honestly, surprised me. I’m not saying that it wasn’t a good book, but I am saying that I don’t think I remember many first-time authors finding such a passionate fanbase that quickly.

Scourge of the Betrayer was a slow burn, and the world building seemed rather nebulous to me. Many plot points felt a little overly-mysterious. I wasn’t really sure where everything was going, and while that really works sometimes, I remember feeling a little frustrated with it in that book.

Years have passed, and finally it was announced that Mr. Salyards is going to, at long last, release the second book in this series that stirred up some noise. I will be honest with you, dear readers, I opened this one with some trepidation. I was worried regarding how much time had passed. Has Salyards lost his game? I remembered the things that frustrated me with the previous book, and worried that he’d do that again in this one to recap and make up for lost time.

Honestly, I was worried that I’d be reading Scourge of the Betrayer V 2.0.

The thing is, this one surprised me, and I really wasn’t expecting that. Salyards really upped the tension, and he quickened the plot. I didn’t feel like anything dragged. In fact, the book itself opens with quite a bang and there’s a no-words-wasted feel to it. The world is real, fleshed out, whole, and full of chaos and diversity. Arki felt like a different person, in the best possible way. He almost leapt off the page. His perspective was engaging and complex, and it had a realness to it that I really didn’t feel in the previous book.

Basically, if you can’t already guess it, Veil of the Deserters leaps off the page. Salyards really poured a lot of time and effort into making his world better, and it pays off. I felt far more engaged in the plot and the conflict(s) due to this. Furthermore, Salyards adds a lot of personal and world history that lacked before. Color me crazy, but I enjoy feeling like the secondary world I’m reading about didn’t just drop onto the page. History makes me feel invested, and Salyards really gives his readers heaping’s of it with finesse. In a lot of ways, Arki and his role as a scribe, is a perfect tool for dropping in doses of information without it feeling infodumpish, and he utilizes this tool liberally.

The world itself has a much larger feel to it, not just because of the things I’ve mentioned before, but because we get to explore a bit more of the map, and the cultures that live in various lands as well. Salyards doesn’t really pretty anything up. Everywhere and everything has a good and bad side. The background characters are great, some are dark, and some add a really nice dollop of humor. All in all, the tone and the expansion of the world really impressed me, and the fact that everything balanced out so well made Veil of the Deserters so easy to sink into.

Arki’s development is perfect, and believable in regards to what happens as the book progresses. He really steps into his own role as a responsible, if conflicted, adult. The situations he finds himself in really forces him to have some emotional conflicts, which are handled just as well as the outward conflicts are handled. In fact, I found Arki’s development to be just as interesting as everything else in the book. In Veil of the Deserters, he changed from a good protagonist, to a fascinating one.

As I mentioned above, the plot starts out with a bang, and it really doesn’t stop rolling. If there is a lull in the action/adventure/intrigue, then there’s enough personal stuff going on behind the scenes to keep you hooked. In fact, between the internal and external conflicts, there really aren’t any speed bumps to be aware of. Things move forward at a fast clip, and there’s so much complexity woven into the plot and side plots that your head will reel (in the best possible way). The ending ties everything up much better than I expected it to, with a bang that impressed and surprised me, and has me hanging on by my fingertips for the next book.

If you read nothing else, understand this, dear reader:

Salyards impressed the holy hell out of me. There’s no other way to say it. The first book was good, but it didn’t really blow me away. I can tell that Veil of the Deserters was a labor of love. Salyards really pushed himself to be the best that he could be. He used Scourge of the Betrayer as a steppingstone, a good start. He turned that good, solid start into something quite amazing. Honestly, in regards to epic, military fantasy, this is some of the best. Salyards really proves himself with this book. He’s got some incredible talent, and he’s tapping into it, and honing it, and it is an absolute delight to watch.