An Ode to Miriam Black

This isn’t a review. I sat down and started to write a review for The Cormorant, and quickly it turned into an ode to Miriam Black and Chuck Wendig.

Then I went on Goodreads and saw that, while I thought this was a trilogy, there is a fourth book planned? I probably missed the news somewhere along the way. Anyway, I have to go to bed and I don’t have time to edit this so it doesn’t read like I don’t know what I’m talking about.

Enjoy a peek into my sleep-deprived mind. Here’s how I think of books… before I boil those thoughts down into a review. Also sans editing. Remember that last bit.

I don’t know what this rambling diatribe is. I hope you enjoy it anyway. 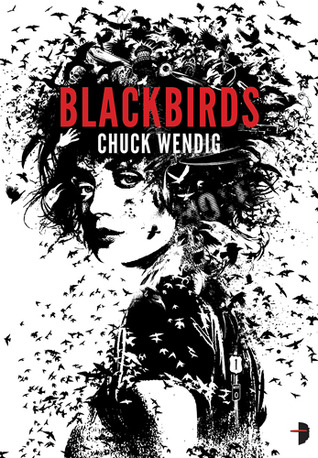 I bought The Cormorant as soon as I could. I put off reading it as long as possible. I refused to review it until now. Why? Because this series was so incredible it hurt. Miriam Black is one of my favorite characters in the history of ever. Her story is so captivating, and so deliciously raw. I didn’t want it to end.

Goddamn it, Chuck. Why did it have to end?!

The thing about Wendig is, he’s crazy talented, and he is not afraid of the darker side of human nature. Indeed, he seems to flourish there. Take a character and twist them, then add some Wendigian darkness and humor and you have… well, something only Chuck Wendig can write.

Miriam has always been a rather dark, tortured, tormented character, and that’s a big reason behind why I love her so much. She has no filter, and life has done her no favors. The moments where the rest of us think, “I probably shouldn’t say that out loud,” Miriam Black says it out loud. It’s a twisted, delightful, and absolutely candid character study.

It’s rare that a book or series focuses on the mental backlash a person would have if they carried these extra, supernatural abilities with them. Most urban fantasy books are full of characters who were born with these super abilities, and they carry along like all is normal. No therapy needed. Of course, there are those characters who do suffer from some stress, some inconvenience, some life abnormalities. But none of them, as far as I’ve run across, are quite as challenged emotionally and socially as Miriam Black.

It is an ode to Wendig’s incredible talent that Miriam Black manages to be both captivating and repulsive at the same time. It also says a 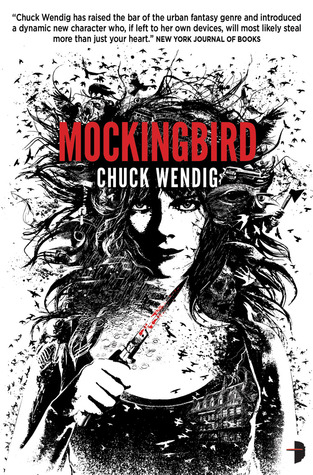 lot for the author that he is willing, and thrives, when he gets into the darker recesses of what a talent like Miriam’s would do to a person. She’s been twisted by life, and Wendig isn’t afraid to show his readers just how twisted. He ventures where many authors wouldn’t dare.

The books in this series are short and sweet, quick to sink into and ending way too soon. The plot continues at its incredible pace, and Miriam never stops developing. Wendig’s writing is raw and to the point, but there are a ton of quotable passages, and hilarity throughout. The darkness and the humor balance each other out nicely throughout the series.

So, what’s the problem? Why have I put off reading and reviewing this last book?

Well, as with The Eternal Sky trilogy by Elizabeth Bear, I just didn’t want it to end. That last book tied up ends nicely, and it left enough room for Wendig to comfortably return to Miriam Black and the world he has created. I want him to very badly.

That’s why I didn’t want to read The Cormorant.

I didn’t want to review it (and I’m not really reviewing anything here) for a completely different reason.

I don’t know how to put into words how absolutely genius I think Miriam Black is, and I hate reviewing the last books in a trilogy because how in the hell am I supposed to do that without giving anything away? 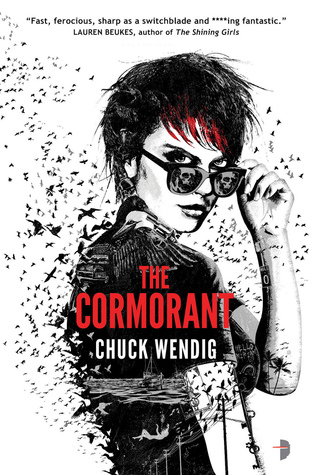 Books in a series usually wind down toward the end. There’s the middle-of-the-series hump where everything feels like it’s a bridge to something grand but there’s really no point. Then there’s the end book, where the author and readers are holding their breath and waiting for that last 100 page HOLY SHIT that the series has been slowly building toward.

Wendig’s series didn’t follow that path. Each book was fairly self contained (thought you do need to read previous books before you read this one). The books all nicely built off the previous one. Each installment in the series develops the characters further. The world, while remaining fairly narrow and focused throughout the series, gains some depth and quality that it lacked in the previous books. This trilogy is one of those rare trilogies that builds itself in layers in every aspect. Miriam, oh, darling Miriam. What can I possibly say about her? Dark, tortured, and so painfully real. Miriam made my heart hurt and my head throb. She made me really think about just how these gifts that we read about so often in speculative fiction, would psychologically make a mark. Miriam Black made me think about SpecFic differently.

Wendig made that possible.

Because Chuck Wendig is a freaking genius.

Miriam Black is like cake. Only this cake isn’t sweet, and there’s no frosting, and no filler – but you can’t stop eating it. It is absolutely impossible to get enough.