GUEST POST | Marie Brennan on Time, Writing, and Tricks of the Trade

Marie Brennan is an author that I pay very close attention to. She has some serious skill. I love her worlds, the way she uses words, the characters she creates. She has this incredible ability to make me feel like I’m taking a literary vacation, and she manages to make me think at the same time. Those two qualities don’t usually go hand-in-hand in books, but they do with Brennan. She’s thoughtful, deep, fun, lively, and makes me look at the world I live in completely differently.

If you haven’t read her books, you really should.

She contacted me recently about her Kickstarter project (full disclosure: I got an email from her while I was at work, and I swear to god I squeaked. My coworkers thought I was nuts). I asked her if she’d like to write a post for Bookworm Blues to try and get her Kickstarter more attention. She agreed, and I just about passed out because Marie-Freaking-Brennan was writing something for my dusty corner of the internet.

Her kickstarter is to fund Chains and Memory. Here’s what it’s all about, from her Kickstarter page:

Chains and Memory is the long-awaited sequel to Lies and Prophecy, an urban fantasy of the near future in a world where half the population has psychic gifts. It continues the story of Kim and Julian after the events of their junior year in college, when the balance of power has changed out from under them and Kim is fighting to escape the grip of the government itself.

This is a version of our world where magic has been common for only a few generations, and the scars of its sudden arrival are not yet fully healed. Psychic powers are an inheritance from the sidhe; human beings are still working to understand them, explore them . . . and control them. Wilders — people born with unusually strong gifts — are at the center of the conflict now, as they and those around them struggle to chain their gifts in the coming war, or else break them free forever.

And that’s about as much as I can say without spoiling Lies and Prophecy . . .

Please check out her kickstarter page. She has some very cool stretch goals, and she’s an author I really want to see more of.

Marie Brennan is a former academic with a background in archaeology, anthropology, and folklore, which she now puts to rather cockeyed use in writing fantasy. She lives in the San Francisco Bay Area, where she spends her time practicing piano, studying karate, and playing a variety of role-playing games.

You can learn more about Marie Brennan, and her work on her website, or chat with her on Twitter.

When I sat down to write Warrior and Witch (the novel now known simply as Witch), I thought I had my work cut out for me. Not only was it the first sequel I’d ever attempted to write, but it was the sequel to a book I had written five years previously, at the age of nineteen. I’d revised Doppelganger (now known as Witch — please forgive the confusing titles) a few times over the intervening years, but there’s a big difference between revision and putting yourself back into that world and that voice for the purpose of writing an entirely new book.

I look back at my twenty-four-year-old self and I laugh and laugh. She had no idea what she’d find herself doing a decade later. 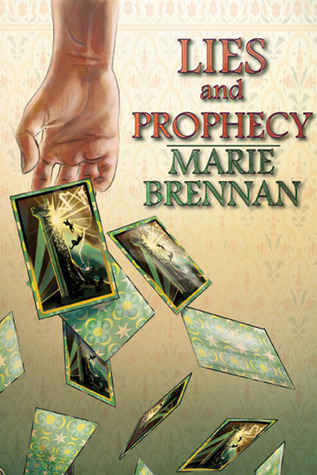 Now I’m writing the sequel to a book I first wrote fifteen years ago. The first draft of Lies and Prophecy was completed the year before Doppelganger, and now here I am, trying to get back into the world and the voice to write an entirely new book, Chains and Memory. It’s a story I’ve been wanting to tell for years; that’s why I decided to run a Kickstarter campaign and squeeze it in between the novels I’m actually contracted for. But it turns out there’s a big difference between planning to tell that story, and putting the words on the page at last.

Some things help. Unlike its predecessor, Chains and Memory doesn’t take place at Welton University; the characters are on vacation from their studies, and Kim is working at an internship in Washington, D.C. The change of venue and context means that a certain amount of change in tone is to be expected. And of course the events of the previous book have had an effect on my protagonists, so if they sound a bit different, I can chalk that up to them having grown as people.

But it’s still a challenge, and I’m pulling out every trick in the book to get myself back in the groove. I re-read Lies and Prophecy, of course, before starting work on the sequel. I’m fortunate in that I created an entire “novel soundtrack” for it, so I can listen to that and, through the wonders of Pavlovian conditioning, re-engage gears I haven’t used in a while. I think I need to do more, though: maybe diagram some of my sentences from the previous book and figure out what structures were characteristic of Kim’s narration. I’ve been writing pseudo-Victorian third person for several years now; getting out of that and back into the voice of a twenty-first-century college student is a bit of a trick. If revising Lies and Prophecy for publication was slipping back into my favorite pair of comfy jeans, this is rummaging through stacks of Levi’s, trying to find the current style that is most like the ones I already have.

It could be worse, though. I could be writing something with a cast of thousands and an invented world. But the good news is, this story is fairly simple, and I learned the hard way while writing the Onyx Court novels that you should start keeping a record of pertinent details before you’re several books into the series. I know writers who have had to pull this trick with books for which a setting bible was both vitally necessary and completely nonexistent.

I’m not really complaining. Like I said, I’ve been wanting to write this story for years, and the fact that now I have a chance to do so is making me absolutely giddy with joy. But man, if I’d known at the tender age of eighteen that I would be revisiting that world at thirty-three, I would have drawn myself a better map!