This week is going to be odd on the website because I’ll be in and out of the hospital for some tests the entire week. I’m not sure how I’ll feel. Today I don’t feel very good at all, so I’m assuming that I’ll just keep feeling worse as the days pass. This will probably impact my reviewing and online presence. 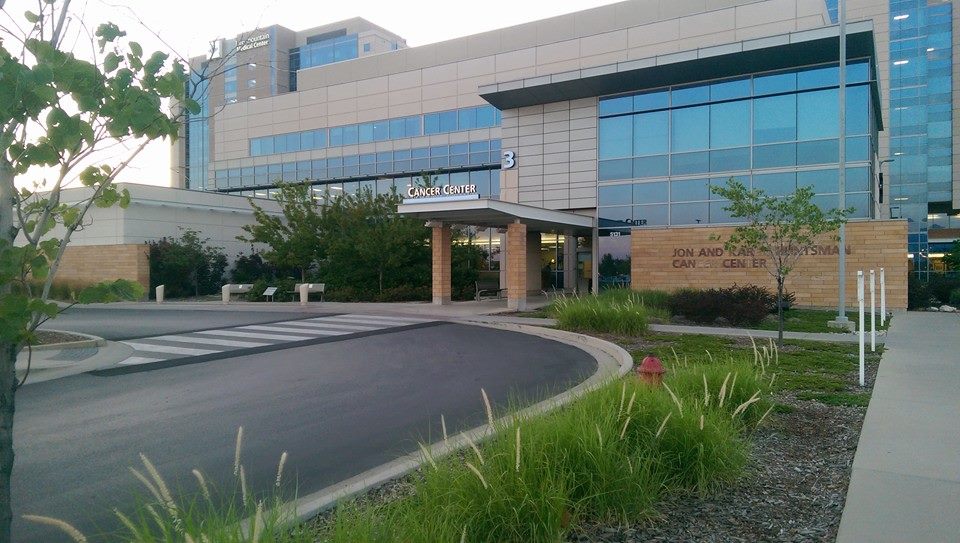 Last weekend I enjoyed my very first convention. Westercon and Fantasycon were both in town, and I got to have a lot of fun at both of them. It was a great opportunity for me to get my mind off of all this cancer stuff, and put some faces to the names that I’ve interacted with over the past few years. I’m really not that good at being social. In fact, I spent a few minutes of each day at the con sitting alone somewhere wondering how exactly “normal” people are supposed to act when they are around a bunch of strangers. Thank (insert holy thing here) that I ran into Peter Orullian each day. He is a man that is kinder than kind. He let me bum around with him, showed me the ropes, and personally introduced me to a bunch of really cool authors that I probably would have been way to shy to introduce myself to otherwise.

Warning: I’m just about the least photogenic person on the planet (which is why I prefer to take pictures rather than be in them). Also, my camera was dirty for about half of the pictures so they are hazy. Consider it the “haze of awesome.”

Brandon Sanderson was the first author I met. He was incredibly kind and I kind of tripped all over myself mentally when he pulled my website up on his tablet and bookmarked it, and then showed me that he bookmarked it. He was kind of all over Westercon and Fantasycon. I honestly can’t figure out how the man does as much as he does and stays relatively sane. He recorded a ton of very interesting Writing Excuses podcasts at both cons. I listened in on a few of them. It was incredibly informative and very interesting.

I also sat in on some great panels. The panels were my favorite part (aside from meeting all the very cool people) of the con. Very informative, and it was cool to hear authors and other industry people talk so openly about their struggles, habits, hobbies, the things they’ve learned, and etc. Also it was nice to be able to share ideas with these people, and to actually TALK to them without a keyboard between us. 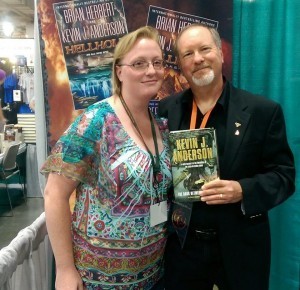 One of the highlights of the con was meeting Kevin J. Anderson, who is the author who got me into SciFi. He was incredibly nice, and I was absolutely floored for about two days that he recognized me, and he knew exactly what my website was, and remembered me from Twitter. He signed my copy of The Dark Between the Stars.  Funny aside, I took my husband to Anderson’s booth on Saturday to show him the staggering number of books the man has written. Anderson saw me and said, “I’m so glad you came back! I want to apologize for that picture yesterday. I wasn’t flipping you off! I swear! I didn’t mean anything by it!” I laughed, because I hadn’t even noticed that aspect of the picture until he pointed it out. I also laughed because he knew who the hell I was (ego = boosted). 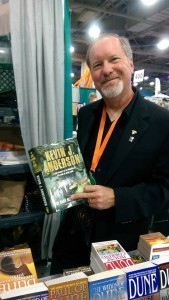 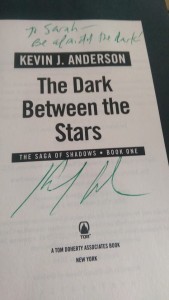 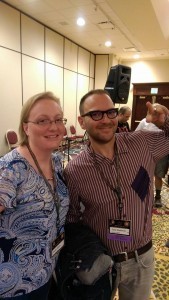 I sat in on a reading with Cory Doctorow. He’s an author I could listen to for a long time. He’s very well educated, and he really knows his technology stuff. I hadn’t thought about a lot of what he talked about in the way he talked about it (NSA stuff, net neutrality issues, etc). Plus, the book he’s writing is something I really want to read. I bothered him for a picture, and he was kind enough to humor me with one.

I also got this picture taken with Larry Correia, mostly to make some of my coworkers jealous. I’ve never read his books, but I have a bunch of friends who are huge fans, and I couldn’t pass up the opportunity to take a picture with him. Regardless of whatever the politics of the moment are, Correia was incredibly nice, and had this sort of larger-than-life personality that attracted people to him. 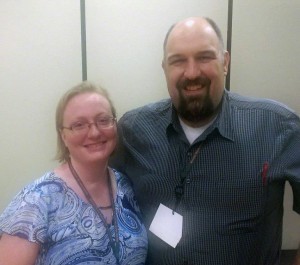 I had quite a few long, deep conversations with Peter Orullian. It’s not my place to say anything about what he has going on, but he has some serious career upheavals (the good kind) coming down the pipe, so you’ll want to be paying attention to him. Also, huge thanks to him for letting me bum around with him, and for letting me suck up his time. It really made my first convention something special. 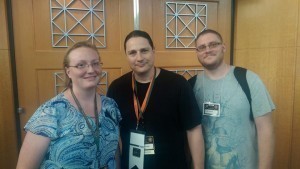 In other news, I met my friend and author AE Marling over at FantasyCon while he was cosplaying Dr. Horrible. I think he nailed the look. 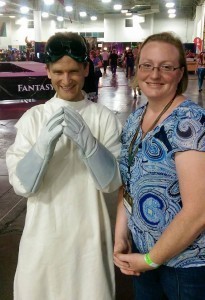 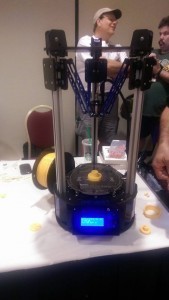 And this is the coolest cosplayer that I saw. Color me geeky. 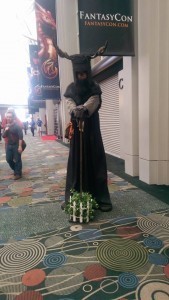 I also SMASHED into actor Kris Holden-Ried, the guy who plays the werewolf on Lost Girl. I was pushing my kid in her stroller around FantasyCon and didn’t notice him. I ran right into him. I looked down to make sure Fiona was okay and apologized about forty times. He laughed, asked if I was okay. I looked up and said, “Jesus Christ you’re famous.” He laughed. We shook hands and parted ways.