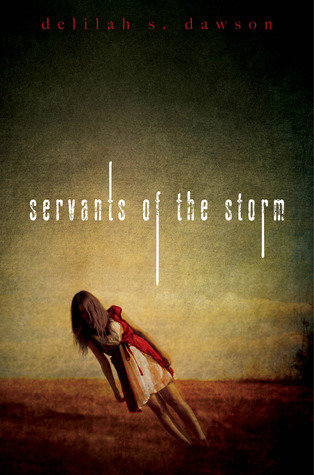 A year ago Hurricane Josephine swept through Savannah, Georgia, leaving behind nothing but death and destruction — and taking the life of Dovey’s best friend, Carly. Since that night, Dovey has been in a medicated haze, numb to everything around her.

But recently she’s started to believe she’s seeing things that can’t be real … including Carly at their favorite cafe. Determined to learn the truth, Dovey stops taking her pills. And the world that opens up to her is unlike anything she could have imagined.

As Dovey slips deeper into the shadowy corners of Savannah — where the dark and horrifying secrets lurk — she learns that the storm that destroyed her city and stole her friend was much more than a force of nature. And now the sinister beings truly responsible are out to finish what they started.

Dovey’s running out of time and torn between two paths. Will she trust her childhood friend Baker, who can’t see the threatening darkness but promises to never give up on Dovey and Carly? Or will she plot with the sexy stranger, Isaac, who offers all the answers — for a price? Soon Dovey realizes that the danger closing in has little to do with Carly … and everything to do with Dovey herself.

Hurricanes are near and dear to my heart. I spent a few months on the Mississippi Gulf Coast after Katrina. The disaster I saw was staggering, and the soul of the area was absolutely clear. There was a lot of frayed and frazzled, dark emotions, but there was also a lot of hope. It was a really interesting thing to see.

Servants of the Storm, due to that, has been on my radar for a while. I wasn’t really sure what to expect, but I was really interested in seeing just how one author with tons of talent could take a natural disaster and turn it into a young adult novel. That’s a true challenge, and Dawson handled it quite well.

Servants of the Storm is a young adult book, but don’t let that push you away. I truly struggle with the YA genre, but I have learned that I enjoy young adult books that treat young adults like they are actually people, rather than children that need to be talked down to. Dawson’s youthful characters have a full depth and scope of emotion that shocked me. Davey deals with loss, intimate death, mental health issues, family struggles, as well as the loss and change of the world she knows and the hurricane ravaged city she’s been part of. These are very real issues, and they are an important emotional core of a book that is full of atmosphere and almost devastatingly powerful emotions.

Atmosphere is really important for any horror or thriller novel, and the eerie setting of a post-hurricane southern town really sets the stage perfectly for all of the creepy things that Dawson is going to throw at readers. She has an intimate knowledge of the city that she’s set her novel in, and it shows. This intimate knowledge does a lot for the world building, and for bringing the setting to life for her readers.

Dawson’s use of demons is rather interesting. While demons feasting on negative emotions is nothing new, Dawson’s use of natural disasters takes that rather tried-and-true demon trope, and spins it into something completely new. Suddenly demons are interesting, and utilize the completely creepy atmosphere to its fullest. It’s hard to put the book down once Davey (and the reader) become aware of this alternative reality.

The ending surprised me. While I could kind of see where things were going to end up, I honestly did not expect how Dawson wrapped it all up. She managed to pull together a lot of the story threads, while leaving enough open for readers to imagine something more after that last word is written.

The writing is solid and really pulls readers in. The character development of Dovey is done in a really fascinating way. Readers learn about Dovey as she learns about herself. After a traumatic experience with the loss of her friend during the hurricane, Dovey has some rather public breakdowns and ends up on medication to manage her moods. As Dovey takes herself off of her medication, she sort of wakes up and has to learn who she is again. She unravels as the story unravels. She has to find out who she is again in the face of this new world, and this other reality that she has to learn about. It’s quite genius on Dawson’s part, and it really works to make Dovey real to readers.

Perhaps my one complaint is the use of details. I’m a sucker for the details, and sometimes I felt that Dawson focused a bit too much on certain details, and not enough on others. This had a tendency to make the book feel a little disjointed in parts. The magic system and the demons seemed to throw her off a bit regarding just how much of what exactly she should tell readers. A character would explain certain points at length, just to have said character reiterate those points again, whereas some aspects of the magic system never really made sense to me. And the rules, or parameters that it is based on were never really fully explained. While, for the most part, this book flows perfectly, there are points where the whole is greater than the parts.

That being said, Servants of the Storm was a wonderful book that truly surprised me and thrilled me. Full of intense, dark atmosphere, and mature characters that will resonate with youth and adults alike, with a fascinating mythology and a riveting mystery. While I do have some quibbles with the execution of details, they are easy to overlook. This is a book that you’ll want to try out if you’re in the mood for something easy to read, intense, and edge-of-your-seat interesting. I’m excited to see what Dawson can think of next.