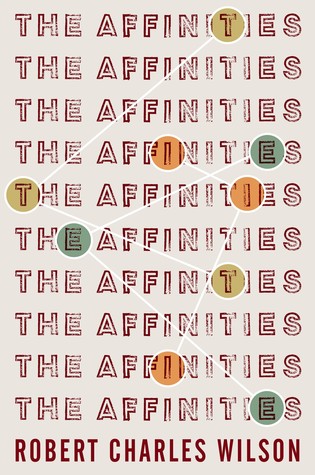 In our rapidly changing world of social media, everyday people are more and more able to sort themselves into social groups based on finer and finer criteria. In the near future of Robert Charles Wilson’s The Affinities, this process is supercharged by new analytic technologies: genetic, brain-mapping, behavioral. To join one of the twenty-two Affinities is to change one’s life. It’s like family, and more than family. Your fellow members aren’t just like you, and they aren’t just people who are likely to like you. They’re also the people with whom you can best cooperate in all areas of life, creative, interpersonal, even financial.

At loose ends both professional and personal, young Adam Fisk takes the suite of tests to see whether he qualifies for any of the Affinities and finds that he’s a match for one of the largest, the one called Tau. It’s utopian–at first. His problems resolve themselves as he becomes part of a global network of people dedicated to helping one another, to helping him, but as the differing Affinities put their new powers to the test, they begin to rapidly chip away at the power of governments, of global corporations, and of all the institutions of the old world; then, with dreadful inevitability, the different Affinities begin to go to war with one another.

The Affinities is a book that’s right up my alley. I love social science fiction books, and I’m really interested in technology and how said technology impacts relationships. This book has all of the above. It contained the full recipe for me to fall in love with it.

And in some ways I did love it.

The writing is superb, and Wilson seemed to know just how much readers would want to know about the characters, and never overwhelmed the plot by their lives or personalities. The focus of the book, the social SciFi aspects of it, are well done and absolutely captivating. There is a lot here for readers to think about, and plenty of meat to chew on.

Adam Fisk is a sort of everyman, and this makes him the perfect person to tell this story. He’s rather displeased with his life, not upset by it, more bored than anything else. He is the perfect candidate for Affinity testing. Affinities in themselves are rather interesting – a social phenomena that puts like personalities into small social groups. These affinities are a fairly new thing. People love to be in them, feeling intimate connections they haven’t felt anywhere else, but not everyone tests into them.

The affinities themselves rise in power, and Wilson does an excellent job at showing just how this happens, and the changes it entails. The Tau affinity, Adam’s affinity, gains power, wealth, and other capabilities. Other affinities are also changing from the fledglings they started out as, into powerful entities. This creates some rather fascinating (and dangerous) power struggles that span the globe, as these groups are worldwide. An affinity’s actions create ripples and the transformation from a social group to a political power is nothing short of riveting.

Coupled with that are political and global tensions. This is, perhaps, where I felt the book lacked a bit. The Affinities starts with Adam being caught in a riot. After that point, the politics drop into the background, barring a few mentions here and there. It isn’t until the middle of the book, and much more toward the end, that these politics and global wars and strife get mentioned in any real sense. That’s fine, the buildup is appreciated, but I was never quite sure what exactly was causing all of this to happen.

I feel sort of silly admitting that, perhaps I missed something while I was reading (it has been known to happen). However, I never was clear on what caused all of this global strife, and I never was incredibly clear on how the affinities, and the war between different affinities, fit into these global politics except for in the vaguest sense. Maybe I’m not supposed to see it, or maybe I am and that part of the book didn’t sink in. Regardless, there seemed to be a lot of buildup between the global politics and the politics between affinities, and I never understood how, or if, the two were related.

The Affinities is a lot of things, but it absolutely isn’t what I expected it to be – in this case that is both good and bad. Yes, this is a social science fiction book, and yes, there is a lot to think about, but this turned into a largely personal novel with an ending that left me feeling rather… dissatisfied. It lacked the power I anticipated. There was so much that was well done, but I couldn’t ignore how many pieces didn’t quite connect. There was a lot about the affinities that was interesting, but required a suspension of disbelief for me to absorb.

And that’s really what got me. This is a personal story of a man finding himself in the middle of a world full of chaos. It’s interesting, and thoughtful, and very well done, but it had the potential to be so much more.

So is it worth reading? Yes. Of course it is. Anything by Robert Charles Wilson is worth reading. I do, however, think this will be a rather polarizing novel. It’ll either work for you, or it won’t. It is worth trying, though. There is a lot here to love, not the least of which is the stunning talent that Wilson possesses.