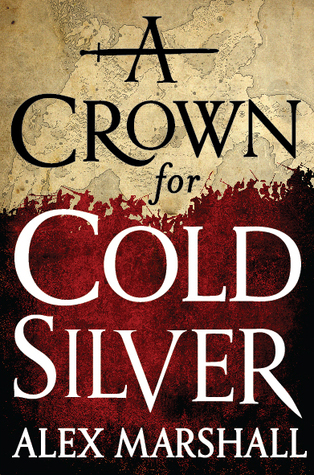 FIVE VILLAINS. ONE LEGENDARY GENERAL. A FINAL QUEST FOR VENGEANCE.

Twenty years ago, feared general Cobalt Zosia led her five villainous captains and mercenary army into battle, wrestling monsters and toppling an empire. When there were no more titles to win and no more worlds to conquer, she retired and gave up her legend to history.

Now the peace she carved for herself has been shattered by the unprovoked slaughter of her village. Seeking bloody vengeance, Zosia heads for battle once more, but to find justice she must confront grudge-bearing enemies, once-loyal allies, and an unknown army that marches under a familiar banner.

A CROWN FOR COLD SILVER is an outstanding epic fantasy debut featuring an unforgettable warrior.

I’ve been kind of burnt out on epic fantasy recently. While I do enjoy it when I’m in the right mood, so often I feel like I’m reading the same story retold with a few new decorations here and there. Perhaps I am a bit too cynical, but that’s just how I’ve been feeling. It takes quite a unique epic saga to attract my attention these days.

A Crown for Cold Silver is everything you’d expect in epic fantasy. There’s a quest (of sorts), a ragtag group of mismatched heroes (or villains), barbarians, magicians, gods, religion, cultural upheaval and everything else. There’s multiple sides, and a true tapestry of characters.

On the other hand, Marshall does a fantastic job of turning tropes on their heads, which is incredibly refreshing. In Marshall’s world, women and men are basically equal, which is a rarity in so much epic fantasy. Zosia, a character I instantly loved, is much older than the typical protagonist in an epic fantasy tale. She’s strong, capable, absolutely surprising, with enough drive to keep her moving forward and keep readers interested.

But the book isn’t about gender roles. In fact, the roles of men and women, and their equal treatment, is so engrained in Marshall’s world, it’s a non-point. Sexual preference is also turned on its head. It’s not a secret, shadowy thing, and it’s not something that society is focused on. Instead, the open acceptance of a multitude of sexual preferences is just a fact of life. It’s refreshing, and it’s brave. Marshall’s treatment of these hot-button topics is gently edged, and almost more powerful due to that.

A Crown for Cold Silver would be much shorter if it wasn’t for a mistake made at the start of the book. While it does take some time for the plot to get moving, that mistake ricochets throughout the book, and is an interesting catalyst for the events that take place, as well as the deep history that is uncovered throughout the book.

Zosia and her band of villains are, in many ways, over-the-top, which is part of their appeal. They are larger than life. None of them are what you’d expect. One character is struggling with addiction, a few play impossible power games, one is content living the life he’s living, and then we have Zosia, whose past is nothing short of riveting, and she has plenty of secrets of her own. Her dog, Choplicker, is not really a character, but he could be and he’s definitely worth paying attention to.

Each of the character perspectives that Marshall deals with are well crafted, with their own voices and motivations. Their pasts are a checkerboard, and often as interesting as the present that is unfolding around them. You’ll love some, and you’ll hate some. You’ll certainly wish some of them get more stage time than they get, and you’ll perhaps wish that others were a bit more believable than they end up being.

It’s really wonderful when an epic fantasy author can make the history that fuels the world he or she ahs created as real as the plot that is developing for the reader. Marshall really excels at that. Zosia was, once upon a time, a revolutionary warrior who managed a coup of the government and installed herself as queen. However, she wasn’t that good at it, and things happened which pushed her into hiding (grossly paraphrased). That incident lives on throughout the book, and still fuels much of the political turmoil and changes that evolve throughout the book. Marshall does a fantastic job at showing how single events can echo through the years in unfathomable ways.

I enjoyed this book a lot more than I expected to, and people will inevitably draw parallels between Marshall and Abercrombie, and other grimdark authors that are important movers and shakers in the genre right now. The comparisons are apt, and if you’re a fan of grimdark, then you’ll probably want to check this one out.

But, as with all things, nothing is perfect. I mentioned above that I think some of the characters could have used more stage time, and some didn’t feel very believable. Some parts of the book felt like they dragged on a little too long, while other parts could have used a bit more exploration. I would have enjoyed more cultural depth and details (but I’m a sucker for that kind of thing). Many of the tropes are turned on their heads, and this will be a polarizing point for readers. Many will find that refreshing, others will find it overwhelming and detracting from the overall believability and enjoyment of the plot.

A Crown for Cold Silver was a lot of fun, and quite surprising. It wasn’t perfect, but as far as epic fantasy goes, I enjoyed it a lot more than I expected to. The writing was fantastic, the world was wonderful, and the characters were delightful. This is a series I will be watching closely. While this book won’t work for everyone who reads it, it is certainly worth giving a try if you’re looking for something different, a bit offbeat, but with all the epic sprawl and feel that you enjoy in your grimdark fantasy.