The Voyage of the Basilisk – Marie Brennan 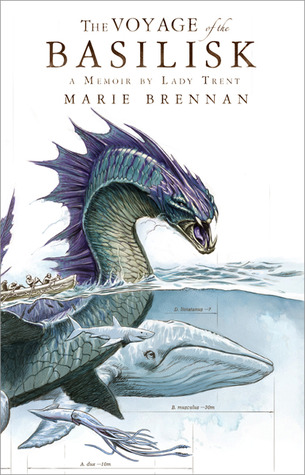 Devoted readers of Lady Trent’s earlier memoirs, A Natural History of Dragons and The Tropic of Serpents, may believe themselves already acquainted with the particulars of her historic voyage aboard the Royal Survey Ship Basilisk, but the true story of that illuminating, harrowing, and scandalous journey has never been revealed—until now. Six years after her perilous exploits in Eriga, Isabella embarks on her most ambitious expedition yet: a two-year trip around the world to study all manner of dragons in every place they might be found. From feathered serpents sunning themselves in the ruins of a fallen civilization to the mighty sea serpents of the tropics, these creatures are a source of both endless fascination and frequent peril. Accompanying her is not only her young son, Jake, but a chivalrous foreign archaeologist whose interests converge with Isabella’s in ways both professional and personal.

Science is, of course, the primary objective of the voyage, but Isabella’s life is rarely so simple. She must cope with storms, shipwrecks, intrigue, and warfare, even as she makes a discovery that offers a revolutionary new insight into the ancient history of dragons.

The Voyage of the Basilisk is the third book in Memoir by Lady Trent series by Marie Brennan. While it isn’t necessary to read the previous books in the series, it is advised, as they are all incredibly enjoyable and some of the conversations refer to points of the previous novels that were addressed.

The Voyage of the Basilisk is a bit different from previous novels. So far, each novel has taken place in one location, allowing Isabella to really get into the local culture and study the dragons more extensively. In this installment of the series, Isabella has taken two years to plan a trip around the world to study dragons all over.

The world, due to the extended voyage, expands by leaps and bounds as Isabella gets to visit numerous ports in numerous lands to study many different dragons. They are in some ports for a month or so, others they only visit for a brief time. However, Isabella gives readers a window into the myriad of different cultures in her world. Brennan does a great job at creating new cultures while using existing cultures in our world as an obvious influence. The world is different enough to be captivating, but unique enough to get my imagination going.

There are, of course, politics that come into play, and new individuals with their own stories and mysteries are met. The new, wider world, and the introduction of interesting politics, and new characters adds a new dynamic to the series, and makes the book more exciting than I expected it to be.

Isabella takes her young son, Jake, on the journey with her, which gives readers an insight into her family dynamic, and her mothering (as she seems to disregard her skills as a mother a lot). It’s a lot of fun to see how her small family keeps her sane at some points, and frustrates her at others. In short, the addition of her family on this journey is quite humanizing and welcome.

It was really wonderful how Brennan shows a clash of cultures, and Isabella’s way of navigating through foreign waters with poise. As with the previous books, Isabella has a mind of her own, and a way of finding excitement and adventure (with or without dragons) wherever she goes. However, the thing I like most about Isabella is that she’s no wilting flower. In a Victorian style world, with so much working against women, Isabella is constantly strong, wading through treacherous waters with a good attitude and a desire for more. She never loses sight of who she is.

The Voyage of the Basilisk is a book I honestly didn’t expect to enjoy. I’m not a big fan of books that take place in ships. I don’t know why, I’m just not. The first half of the book takes place mostly with Isabella and company traveling from one location to another in search of dragons. The plot didn’t really get incredibly interesting until the halfway point, when there is a shipwreck and the crew of the Basilisk end up as guests of tropical islanders. Things get pretty interesting at that point.

As always, Isabella finds and discovers a lot of new species of dragons, all of which are incredibly interesting. The mix of science and exploration is absolutely addicting, and despite the fact that the book started a bit slow (I’m sorry, I genuinely have minimal interest in nautical plots), things really took off. The world expands tremendously, and the characters gain depth and breadth. Isabella has more confidence in herself and her abilities. Jake, her son, was beyond welcome as a main character as he allowed readers an insight into the family dynamic between him and his mother, and brought some youthful vim and vigor to the book.

Basically, The Voyage of the Basilisk was another strong, welcome, and fun installment to a series I’ve started looking forward to each year. This is the sort of lighthearted, easy to read fantasy novel that fans of the genre should look out for.