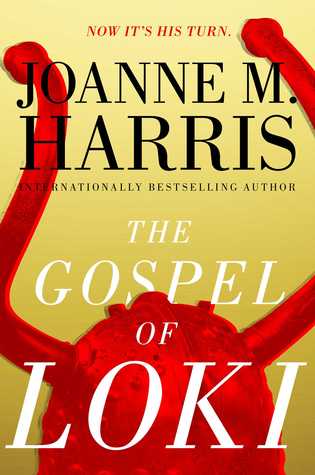 The novel is a brilliant first-person narrative of the rise and fall of the Norse gods – retold from the point of view of the world’s ultimate trickster, Loki. It tells the story of Loki’s recruitment from the underworld of Chaos, his many exploits on behalf of his one-eyed master, Odin, through to his eventual betrayal of the gods and the fall of Asgard itself. Using her life-long passion for the Norse myths, Joanne Harris has created a vibrant and powerful fantasy novel.

Loki, the Light-Bringer, the misunderstood, the elusive, the handsome and modest hero of this particular tissue of lies. Take it with a pinch of salt, but it’s at least as true as the official version, and, dare I say it, more entertaining.

So far, history, such as it is, has cast me in a rather unflattering role.

Now it’s my turn to take the stage.

With his notorious reputation for trickery and deception, and an ability to cause as many problems as he solves, Loki is a Norse god like no other. Demon-born, he is viewed with deepest suspicion by his fellow gods who will never accept him as one of their own and for this he vows to take his revenge.

From his recruitment by Odin from the realm of Chaos, through his years as the go-to man of Asgard, to his fall from grace in the build-up to Ragnarok, this is the unofficial history of the world’s ultimate trickster.

I’m a big fan of the antihero, therefore Loki really caught my interest. This book was published a while ago in the UK, and it’s just hitting the US now. When the publisher asked if I’d be interested in reading it, I got all sorts of excited. I’ve had my eye on this one for a while. I enjoy fables and myths, and their various retellings, and as I stated above, I really enjoy the antihero.

I’m not that big on Norse mythology. I know a few of the basics, but really I never delved too much into it. The first thing to be aware of, with the resurgence of Loki due to various popular movies, you should know that this is not a modernization and this is not Tom Hiddleston’s character. I’m a big fan of the popular culture Loki, but I ended up enjoying the voice of the Loki in this book a bit more than the Loki in the movies.

In a lot of ways this book doesn’t deviate much from the tales many people familiar with Norse mythology will recognize. What is different is the fact that Loki, the trickster, is telling the stories. That simple switch of a viewpoint makes a huge difference. Loki is full of mirth and suppressed humor. He keeps a stiff story, and a stiff culture, quite interesting, and it is surprisingly easy to sympathize with him and see those “good guys” in a completely different light.

The Gospel of Loki moves at a quick pace. There really is never a dull moment, and while the book tells one overarching tale, each chapter feels more like a story that is related to its neighboring stories. It works really well, making each chapter end culmination rather than a cliffhanger that keeps you going and going and going. However, while it might have good stopping points throughout the novel, you probably won’t want to stop reading it. It’s really hard to put this one down, and it’s not very long so you’ll finish it faster than you expect.

Harris did a lot of research before writing this novel, and it really pays off. The world, mythologies, the unique perspectives, and mostly the language are tight and add a lot of layer and texture to old tales we might have all heard before. Harris’s tight research and her fantastic use of language laced with Loki’s humor keeps the book interesting and the world fresh and real for her readers.

Loki really is a fantastic character. The book starts with a bit of mythology for background, how the world was created, how the gods came to be gods. Yes, it’s a bit of a backstory, but Harris has a way with keeping things interesting. I found myself reading passages to my husband as I went, which is something that I rarely ever do. Soon after that, we get to the story of Loki, how he was born and how he met Odin and ended up working with him. It’s a great way to start the book. It gave readers like me enough information to both educate and refresh me, while the unique way of telling the tale will keep readers who know a bit more than I do interested.

As a negative, I could easily see how some readers who are really familiar with Norse mythology might find themselves kind of bored by re-reading a bunch of stories that they probably already know really well. They might also be a bit dismayed by the modern language that Harris used to tell her tale. However, I really don’t think that’s going to be a big issue for many readers.

Loki is a hilarious character. The Gospel of Loki is both intense, and hilarious. Loki makes it a point to prove that he’s really no better than exactly who and what he is. He revels in his flaws and enjoys the aspects of himself that makes him different than what’s around him, and that’s what makes him so damn interesting. He’s shockingly human, which is a glaring juxtaposition to everything that is around him.

The Gospel of Loki thrilled me. Harris really hit the ball out of the park with this one. I picked it up, and was absolutely unable to put it down until I finished it. If you’re one of those people who enjoys mythology and retellings, then you really need to do yourself a favor and read this book.