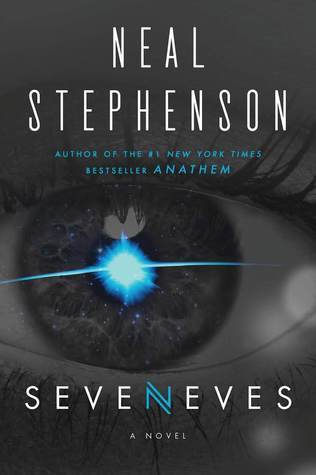 What would happen if the world were ending?

A catastrophic event renders the earth a ticking time bomb. In a feverish race against the inevitable, nations around the globe band together to devise an ambitious plan to ensure the survival of humanity far beyond our atmosphere, in outer space.

But the complexities and unpredictability of human nature coupled with unforeseen challenges and dangers threaten the intrepid pioneers, until only a handful of survivors remain . . .

Five thousand years later, their progeny—seven distinct races now three billion strong—embark on yet another audacious journey into the unknown . . . to an alien world utterly transformed by cataclysm and time: Earth.

I’m a Neal Stephenson fan, and Seveneves is the sort of book that is right up my alley. I preordered the audiobook on Audible, and devoured all 30+ hours of it in the space of about a week.

There is a lot here that is absolute candy for me, despite how plausible or implausible some of the ideas are. Most of the book is dedicated to examining how humanity in its current incarnation would address an issue such as the one presented at the beginning of the book, and what exactly we would do if we were facing an mass extinction and had a timeline for said event.

It’s full of tension, and completely thought provoking. Periods of it are very uncomfortable, and full of intense emotion, and parts of it are full of technical details that honestly went so far over my head I kind of tuned out for a few minutes. Yes, I struggle with that sort of thing, but it’s obvious that Stephenson doesn’t. In fact, his love of details and explanations really brings the book to life.

In fact, it’s those details that made the book so interesting. There are a lot of aspects of life in space that Stephenson explores that I never thought about before, from the fact that most people who end up in space quickly cut their hair, to radiation, and how that impacts quality of life – including cancer, and so much more. In essence, this book can be just as much of a thought experiment and education as it is an interesting plot based on a fascinating premise.

As I mentioned above, this is one hell of a tense book, and the sheer scope of the saga being told, and the emotions involved in it absolutely floored me. That, and the attention to detail, is probably really where this book excels. The main characters involved, the ones who started on the space station are the ones that really compelled me. Eventually others are added, and some of those felt a little predictable and cookie-cutter, which is easily overlooked but should be noted.

I’m not exactly what a person would consider a math or science wiz, and I understand about as much about space as I understand about the dynamics of the social structure of hissing cockroaches, but that doesn’t stop me from really enjoying scifi and techno thrillers. However, that does mean that I’m really not completely sure how plausible many of the ideas and events that take place in this novel are. There were plenty of times when I thought, “yeah right…” but that was nicely balanced with, “Man, that doesn’t seem real at all but wow, it works well in the context of this book.”

The plot is pretty quick moving. Most of it focuses on high-ranking individuals involved in the Cloud Ark program. It would have been kind of interesting to see more action of the people on the ground while these preparations are taking place. I often thought that while the story in space is interesting, it might have been even more emotionally compelling if stories of the regular populous were spliced in on occasion. Then again, this is already a long book, and Stephenson obviously knew what he was doing.

Most of the book is following the Cloud Ark, and the various struggles and tough realities that they face while they try to preserve themselves and what remains of the human race. It is grim and dirty, and while I do feel that some events could have been drawn out a bit more and others could have been shortened a bit, this portion of the saga is really the part of the book that made the biggest impact on me.

The last section of the book, much shorter than the first, takes place 5,000 years in the future when the different races are finally trying to terraform earth and settle there again. It’s largely a first contact story with a lot of infodumping to bring readers up to speed regarding what happened in the previous 5,000 years to that point. It’s compelling, but it felt largely like a summary of important facts with characters that I never really connected with.

And then it ends.

Seveneves was an absolutely captivating book, but I feel like it missed some points that could have made it astounding. It was a highlight of my recent reading, but the focus on some points, and the glossing over of others, as well as the last chunk of the book left me a little underwhelmed. That being said, despite my quibbles, this was one incredibly strong novel that is an absolute must for sci-fi readers, fans of technology, and anyone looking for some serious brain food.