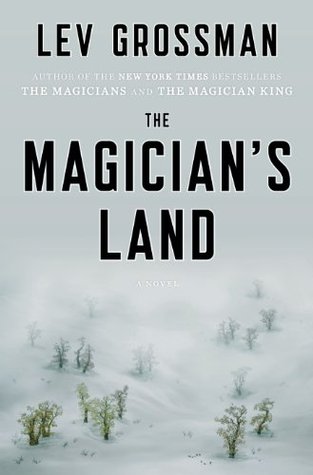 Quentin Coldwater has been cast out of Fillory, the secret magical land of his childhood dreams. With nothing left to lose, he returns to where his story began, the Brakebills Preparatory College of Magic, but he can’t hide from his past, and it’s not long before it comes looking for him.

Along with Plum, a brilliant young undergraduate with a dark secret of her own, Quentin sets out on a crooked path through a magical demimonde of gray magic and desperate characters. But all roads lead back to Fillory, and his new life takes him to old haunts, like Antarctica, and to buried secrets and old friends he thought were lost forever. He uncovers the key to a sorcery masterwork, a spell that could create magical utopia, and a new Fillory–but casting it will set in motion a chain of events that will bring Earth and Fillory crashing together. To save them he will have to risk sacrificing everything.

The first thing I’m going to mention is that, after listening to the audio version of this series, I will never be able to actually read it. It’s incredibly rare that a narrator manages to nail a book as perfectly as Mark Bramhall, but wow… he really did it. I completely and absolutely recommend listening to this series in audio form. You won’t regret it.

The Magician’s Land is the last book in (what turned out to be) one of my favorite trilogies. In this book, Quentin has been stripped of much of what made him special, and thrust into a world that he doesn’t understand, and equally doesn’t understand him. In many ways he’s truly lost for the first time since he found his way into Brakebills.

Not only that, but many of the things that Quentin (and readers) assumed made him special ended up not being that special. For example, his knack ends up being something rather mundane and unimpressive. It’s stated several times that many people are far more powerful than he is without even really trying.

And that’s part of what makes this third book so damn good. Quentin suddenly isn’t that special. He’s just your average dude slogging through a confusing world, trying to find his place in things. In the process he screws up pretty bad, and ends up in the middle of an operation he doesn’t understand, which spins him into a situation that is as captivating as it is nearly unbelievable.

However, things change, and it stops being a story about Quentin who lost everything, and it starts being a culmination of events, a nice wrapping up of an epic journey that turned a teenager into an adult. Quentin gets a mission: to create something, to build something that is more than just himself. It’s quite thought provoking.

Paralleled with all of that is the story of Fillory, which is dying, and the kings and queens of that land. We get to know Janet a bit better, and Eliot’s voice is quite humorous, adding a nice chuckle to a rather dark situation. However, Janet ended up being my favorite voice in the novel. She’s got an attitude problem and she owns it, and her sarcastic somewhat jaded observations really ended up brightening up parts of the book that could have been overly dark.

There really is nonstop adventure, and the delightful thing is nothing really ends up where you expect it to be, but the ending that it leads to is absolutely perfect for the series as a whole. New characters, (Plum) are introduced, and old characters make an appearance again. But nothing ever really stops happening. There is no real feel that this book is winding down after an epic journey, like some end-of-series books I’ve read. I never felt like I was reading one really long, long ending. There really is a full and comprehensive adventure in these pages, and it reads well as its own book, and as the last part of one of the best trilogies I’ve read (listened to) in a long time.

Lev Grossman has a knack for telling one holy hell of a story. His writing is superb, epic in scope, lyrical with its flow, and hilarious at unexpected times. This is the last book in a trilogy that absolutely blew me away. Some books I read and think, “Well, that was a fun few hours…” this one I read and thought, “Good lord, what can possibly follow that?”